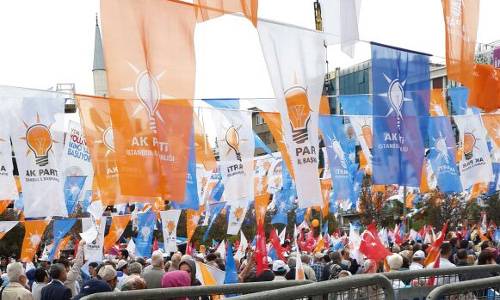 BACKGROUND: Turkey’s ruling Justice and Development Party (AKP) has remained committed to a strategy based on pragmatism and populism. Since it came to power in 2002, it has dispensed with developing any consistent ideological or discursive framework.  The heterogeneity of the AKP’s policies has not been detrimental to the party’s popularity, on the contrary. In large part due to the charismatic leadership of President Recep Tayyip Erdoğan, and helped by the government's control over the media outlets and the control that it exercises over civil society,  the party has maintained its grip on opinion. However, the success of the AKP’s strategy has not only been due to the “selling” of the party, but also on how the opposition to the ruling party has been portrayed, defamed and delegitimized.

The early years of the AKP rule were marked by a crisis of legitimacy; it was the result of the fact that the secularist circles, led by the Turkish military, challenged the legitimacy of the AKP. In response, the AKP defined itself as the representative of universal, liberal values, democracy, human rights, the rule of law and civil rights, in order to shield itself from the threatening intervention of the military. This discourse and strategy automatically equaled criticizing the AKP with advocating anti-democratic measures and supporting the return of military tutelage. The AKP convened and relied on a coalition, composed of conservatives, left and right wing liberals, business associations, Islamic cults and minority groups. These members of the coalition behind the AKP were all discontents of the Kemalist, secularist and nationalist regime.

In contrast to the AKP, which was identified as and held to be the agent of liberal and humanitarian values, the opponents did appear highly antipathetic. Accordingly, opposition circles were described as ultra-nationalists and as coup supporters, as reactionaries who were hopelessly out of tune with the realities of the era of globalization. This was certainly how they came to be viewed by international observers. Furthermore, it was argued that the seculars who criticized the AKP did so because they had a vested self-interest; they were held to be members of a privileged class that had enjoyed the economic advantages of the defunct Kemalist regime. In order to support this argument, the term "white Turks" was coined to describe the seculars; it successfully established the notion of a bifurcation between a supposed privileged Kemalist minority and the AKP, as the representative of the majority, which had supposedly been oppressed by the ancient regime.

This dichotomy was very effectively exploited by the AKP during its struggle to consolidate its grip on power.  By the help of this strategy based on caricaturizing its critics, the AKP succeeded in neutralizing the military as a political force, securing its control not only over the bureaucracy, but also increasingly over media, academia, the business world and civil society in general.  The AKP could succeed in this, without risking any serious political backlash, because challenging it had become tantamount to defending a non-democratic, militaristic and unfair political system. Therefore, the so-called liberals that supported the AKP and the leading actors of the international community did not mind that the AKP's steps to capture the state apparatus and to gain control over society were accompanied by violations of liberal principles – the rule of law, a free market economy, the independence of the media.

IMPLICATIONS: However, the perception of the AKP as the liberal antithesis of authoritarian Kemalism was dramatically to crumble when the police violently crushed the Gezi protests in 2013. According to the official account, over two million people took part in the mass protests against the government. In addition to the brutality of the police, the behavior of then Prime Minister Recep Tayyip Erdoğan demonstrated the intolerance of the AKP regime and revealed the lengths to which the regime was prepared to go in order to neutralize perceived threats to it. The AKP elite and media accused the protesters of serving the intelligence agencies of foreign countries and held that their demands for more democracy and transparency were part of an international conspiracy against Turkey.

Similarly, the regime was to argue that the graft probe that was launched in December 2013 against government officials was organized by Gülenist prosecutors, who were said to be acting on behalf of international powers and lobbies.

While early on the opponents of the AKP had been accused of paving the way for a military coup, now critics – many of whom had earlier supported the AKP as a liberal hope – who had started to criticize the democratic deficits of the government were caricaturized as stooges of foreign powers who were supposedly aiming to undermine Turkey's economic and political rise.

In the general election of June 2015, seven out of ten Kurdish voters cast their votes for the HDP. However, the success of the HDP, which received a record 13 percent of the total vote, also spelled the end of the search for a peaceful solution, and the clashes between PKK and the security forces recommenced. This also meant that those who had been the AKP’s partners for the duration of the solution process were re-branded as enemies of the nation.

As long as the peace talks had lasted, the representatives of the AKP had seemed to be counting on the support of the Kurdish movement for the adoption of a presidential system, in return for some form of local autonomy. However, statements by the co-chairman of the HDP, Selahattin Demirtaş, prior to the June 2015 general election had made clear that the AKP’s hopes for such a bargain were exaggerated, although not entirely unfounded. When the clashes between the PKK and the security forces restarted, the line between opposing the AKP and supporting PKK terrorism was also blurred.

Finally, the failed coup attempt last summer, which was allegedly organized by a Gülenist faction in the military, gave a free hand to the AKP to arbitrarily stigmatize opposition groups, and journalists, academics and civil society organizations that are critical towards the government. Following the failed coup, a state of emergency was declared and thousands of civil servants, including academics, army officers, judges, and public prosecutors have been dismissed without any legal procedure. Media outlets, publishing houses and civil society organizations have been shut down. Although it is undeniable that the infiltration of members of the Gülenist cult in the bureaucracy did pose a serious threat to the government, the steps taken to neutralize this threat have vastly overstepped the boundaries of legitimate action. The personal and arbitrary assessments of those who are close to the AKP government have prevailed over objective, legal procedures.

CONCLUSIONS: The AKP regime has from the very beginning of its rule successfully deployed the tactic of defaming and delegitimizing opposition. The seculars were “white Turks” who had supposedly oppressed the popular masses, and their defense of secularism was nothing but an expression of their desire to maintain their material interests by reinstating an unjust system. The liberals and the left, who had supported the AKP but had become critical after peaceful protesters were brutalized by the police in 2013, were held to be conspiring with foreign powers that are scheming to sabotage Turkey’s political and economic rise. The Kurdish movement, which for a while had been engaged in a common endeavor with the AKP, was subsequently also re-branded the enemy of Turkey.

And, finally, the very real threat from another former ally of the regime, the Gülenists, has come to be used to defame anyone who objects to the authoritarian drift of the country. In sum, one could easily be labeled as a traitor, terrorist, coup plotter or Gülenist if one criticizes the AKP's democratic deficits. After the U.S. Dollar sharply increased against the Turkish Lira in January 2017, President Erdoğan said that "there is no difference between a terrorist with a gun and a terrorist with forex." In a similar vein, regarding the upcoming referendum on constitutional amendments, the president said "all those planning to vote ‘no’ could be considered in the same ranks as the plotters of the coup attempt."

Opposition to the AKP government has indeed always been treated as illegitimate. But the tactic has ultimately been successful because those who are or who have successively been targeted by the AKP – seculars, liberals, the left, Kurds – have also held each other’s demands or opposition to be illegitimate. The liberals supported the charge against the seculars, while the latter have little sympathy for the former or for the demands of the Kurds. Thus, Turkey’s democracy is crippled not only because the opposition has been defamed and criminalized since the beginning of the AKP regime. It is the divisions in society that make authoritarianism possible.

Burak Bilgehan Özpek is Associate Professor at the Department of Political Science and International relations in TOBB University of Economics and Technology, Ankara