The attempt by President Recep Tayyip Erdoğan to offset the fallout from the crisis in Turkey’s relations with the US by re-engaging with the EU is unlikely to persuade Brussels either to revitalize Turkey’s stalled accession process or to provide sufficient financial aid to prevent the country’s economy from sliding into recession. Although a softening in tone and an increase in dialogue raises the possibility of cooperation in areas of mutual interest, nor is there much prospect of the re-engagement leading to a significant easing in Erdoğan’s repressive rule. 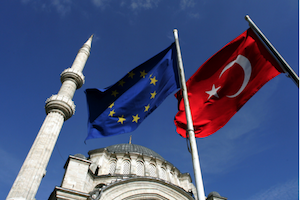 BACKGROUND: On August 29, 2018, Turkish Foreign Minister Mevlüt Çavuşoğlu chaired the fourth meeting of what is known as the Reform Action Group (REG), which was formed in November 2014 to accelerate the reforms required for Turkish accession to the EU. The meeting was held at the Ministry for Foreign Affairs in Ankara and attended by three other ministers -- Justice Minister Abdulhamit Gül, Interior Minister Süleyman Soylu, and Erdoğan’s heir apparent, Treasury and Finance Minister Berat Albayrak – and representatives of the Presidency, but not Erdoğan himself.

REG succeeded the Reform Monitoring Group (RİG), which held 30 meetings between its foundation in September 2003 and its replacement by REG in 2014. The REG meeting in August 2018 was the first time that the group had met since December 2015. It coincided with an increased effort by the regime to engage with the EU, culminating in Erdoğan securing an official visit to Germany on September 28-29 – which will be the first time he has visited the country since publicly describing German officials as “Nazis” in March 2017.

In the official statement released after the REG meeting of August 29, the Ministry for Foreign Affairs said that the government would continue to reform the Turkish judicial system with “the standards of the Council of Europe” and the “norms and acquis of the EU” serving as “an anchor in the steps to be taken”. In return, Ankara expected the EU to lift visa requirements for Turkish citizens visiting the Schengen zone and to initiate negotiations to broaden Turkey’s Customs Union Agreement with the EU, which came into effect in January 1996 but which excludes areas such as agriculture. In addition, the EU was called on to respond to Turkey’s commitment to maintaining “a stance founded on democracy, rule of law and protection of human rights” by opening two of the 17 unopened chapters of its stalled EU accession process: Chapter 23 on the Judiciary and Fundamental Rights and Chapter 24 on Justice, Freedom and Security.

Although Turkish officials have continued to react fiercely to specific statements and actions by individual member states – such as Greece’s recent granting of asylum to military personnel who fled Turkey after the abortive 2016 coup -- Erdoğan’s new policy of engagement has been accompanied by an overall softening both in the regime’s rhetoric about the EU and in the attitude towards Europe in the government-dominated Turkish media.

The timing of Erdoğan’s new policy of engagement with the EU leaves little doubt that it has been prompted by – and is designed to try to compensate for – the crisis in Turkey’s ties with the United States, which has intensified since President Donald Trump’s announcement on August 10 of a doubling in US tariffs on Turkish steel and aluminum in response to Ankara’s continued refusal to release the imprisoned American Pastor Andrew Brunson.

Ever since the Gezi Park Protests of 2013, Erdoğan has made his continued grip on power dependent on the successful inculcation amongst his supporters of virulently anti-Western conspiracy theories and the deepening of social cleavages by portraying his domestic critics and opponents as treacherous fifth columnists employed by foreign powers to sabotage what he has described as Turkey’s rise to global pre-eminence under his leadership. The US has always been central to these conspiracy theories. But, as US-Turkish ties have deteriorated through 2018, Erdoğan’s narrative has focused almost exclusively on Washington and the Trump administration, thus making it easier for him to reach out to the EU.

Indeed, government officials appear genuinely convinced that the combination of Erdoğan’s new policy of engagement and the widespread antipathy towards Trump in the EU – not least because the EU has problems of its own with Trump’s trade policies – will be sufficient to secure a rapprochement in EU-Turkey ties. There are even hopes in Ankara that, when he visits Berlin, Erdoğan will secure a promise from Germany of EU funding for Turkey’s troubled economy – whose difficulties Erdoğan has repeatedly attributed to an “attack” by the US rather than the economy’s own underlying weaknesses and vulnerabilities.

IMPLICATIONS: There is a mechanism under which the EU can provide funding to support the economies of candidate countries. Germany in particular has already expressed concerns about the possible repercussions of an economic collapse. Nevertheless, there would be considerable public resistance in European member states to the use of tax payers’ money to support a regime which is widely regarded as being undemocratic and repressive – and one whose policies are seen as being directly responsible for most of Turkey’s current economic difficulties. More critically, even if the EU agrees to provide Erdoğan with funding, it simply does not have sufficient available funds to meet Turkey’s likely needs – which are currently estimated to be well in excess of the $50 billion credit line that the International Monetary Fund (IMF) agreed with Argentina in June 2018.

However, the extent of the damage that Turkey suffers from what is likely to be a sharp economic downturn in late 2018 and through early 2019 will depend on how long it takes to restore international investor confidence rather than the size of any bailout package – the disbursement of which would, in any case, be dependent on at least a measure of confidence in the Erdoğan regime’s ability to manage the economy. This can only come about as a result of action not by the EU but by the Erdoğan regime, in the form of a convincing strategy to tackle the country’s economic problems. The first prerequisite of any convincing strategy is an acknowledgment – even if it is implicit rather than explicit – that the crisis with the US has exposed, rather than created, the Turkish economy’s weaknesses and vulnerabilities. The longer that Erdoğan  persists in denying that the economy’s problems are home-grown and continues to blame them on the US, the deeper and more damaging the coming recession is going to be.

Nor is there any imminent prospect of the countries of the Schengen zone lifting visa requirements for Turkish citizens or of the EU renegotiating and expanding the Customs Union. The EU has repeatedly made it clear to Turkey that progress on either issue is conditional on Erdoğan implementing genuinely democratizing reforms – first halting and then reversing the country’s slide into authoritarianism and the collapse of any vestige of the rule of law. In practice, this would require Erdoğan to dismantle the repressive system which has enabled him to continue to rule the country – including by turning the judicial system into an instrument of his personal power. Indeed, despite the control that he now exercises over election processes, the campaigns that precede them and the flow of information on which voters base their decisions, Erdoğan and the ruling Justice and Development Party (AKP) have still only succeeded in securing relatively narrow margins of victory -- certainly too narrow for Erdoğan to be confident of winning if he implemented the freedoms envisaged by the EU’s acquis communautaire.

In this context, it is ironic that the statement issued after the REG meeting of August 29 singled out Chapters 23 and 24 of the accession process. Under the current circumstances in Turkey, out of the 17 chapters that remain unopened, 23 and 24 are probably the last chapters that the EU would consider opening. Nor has the increased politicization of the Turkish judiciary only affected Turkish citizens. Germany alone has approximately 50 of its nationals in jail in Turkey on politicized charges.

But it would probably be a mistake to assume that the regime is necessarily being disingenuous in calling for the opening of Chapters 23 and 24 and arguing that any remaining problems in the Turkish judicial system can be resolved through some fine tuning. On the contrary, they often appear genuinely convinced that the repeated flagrant abuses even of the provisions of Turkish law either do not exist or can be justified by what they claim are Turkey’s exceptional circumstances, whether the real security threat posed by organizations such as Kurdistan Workers’ Party (PKK) or the imagined one from nefarious foreign conspiracies.

One of the most striking features of the statement released after the REG meeting in August is its insistence that the government will ensure that the judicial system will comply with the standards of the Council of Europe. Yet Erdoğan has repeatedly called for the re-introduction of capital punishment, something which would lead to Turkey’s immediate expulsion from the Council of Europe. In practice, the reintroduction of the death penalty is unlikely to happen as it would need a constitutional amendment which, given the current distribution of seats in parliament, would require the support of an opposition party. But this has not deterred Erdoğan, who has continued to push for it in Cabinet, including once overriding an objection from one of his ministers by arguing that the US still applies the death penalty – and leaving the minister concerned with the unenviable task of pointing out that the US is not a member of the Council of Europe.

CONCLUSIONS: Erdoğan’s attempt to re-engage with the EU appears to be based on the premise that good relations with Brussels and Washington are somehow interchangeable – whereas, in reality, they are complementary. Similarly, his seemingly sincere scapegoating of foreigners for Turkey’s economic problems, his constant recourse to conspiracy theories to try to explain his own policy failures and his over-optimistic expectations from the re-engagement with the EU all serve to reinforce already serious concerns about the extent to which he understands the world – and the degree to which, as Erdoğan has become enveloped in his own personality cult, decision-making processes in the government have been stripped of expert input.

This is not to say that Erdoğan’s attempted rapprochement with the EU will be without benefits. Germany in particular has already reciprocated Erdoğan’s softer tone – and increased engagement does at least raise the possibility of increased cooperation in areas of mutual interest, such as migration. But there is a risk that, especially as it is unlikely to deliver on Erdoğan’s key demands and fearful of jeopardizing its agreement with Ankara on the Syrian refugees, the EU will adopt a policy of appeasement and avoid pressing him to introduce truly democratizing reforms. Even if it does apply pressure, the results are likely to be limited – not least because Erdoğan cannot now ease his domestic repression without risking a loosening of his grip on power.

Picture credit: In the Public Domain accessed on September 10, 2018

More in this category: « Erdoğan’s Interests Converge with Putin in Moldova’s Gagauzia A Crisis Foretold: Anatomy of Turkey's Threatening Economic Meltdown »
back to top