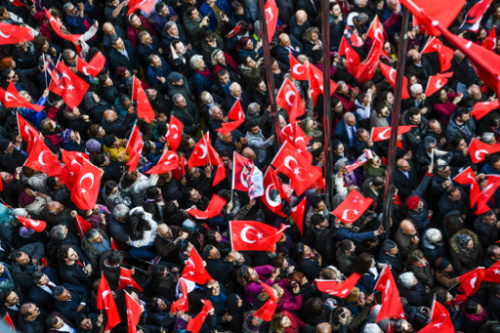 BACKGROUND: At around 16.20 on November 13th, 2022, an improvised explosive device (IED) exploded next to a bench on Istanbul’s crowded İstiklal Avenue, one of the main shopping thoroughfares on the European side of the city. Six people, all Turkish nationals, were killed and another 81 injured. No organization has claimed responsibility for the blast.

In recent years, the now largely government-controlled mainstream media have hesitated, awaiting instructions from the presidential palace, before deciding how to cover a breaking news event. This time there was little delay. The attack’s central location meant that television crews were on the scene very quickly. Shortly after the blast, the government-controlled CNNTürk cut from its live coverage of the bombing to a news item about Turkish military strikes against the Kurdistan Workers’ Party (PKK) in northern Iraq. The station then broke with its published schedule to broadcast a “documentary” about the crushing by the security forces of the PKK’s attempts to create an autonomous area in the heart of the main Kurdish city of Diyarbakır in 2015-16 – which was also the last time that the PKK launched a bombing campaign in western Turkey. At the time that CNNTürk changed its schedule, that there was no indication that the PKK was responsible for the Istanbul bombing. Nor did CNNTürk mention that Islamist militants also carried out a campaign of attacks and bombings in western Turkey, including Istanbul, from 2015 through to early 2017.

As speculation about who was responsible for the bombing began to circulate on social media, the government-controlled Radio and Television Supreme Council (RTÜK) announced a ban on media reporting of the blast. This was swiftly followed by a government order to internet providers in Turkey to restrict bandwidth in order to try to choke access to social media platforms.

Nevertheless, CCTV footage soon appeared on the internet showing a head-scarfed young woman sitting for 40 minutes on the bench where the explosion occurred, before walking away and leaving a bag behind her.

Speaking at an early evening press conference at Ankara Airport before flying to Bali, the normally assertive Erdoğan refused to be drawn on the cause of the blast in Istanbul, stating that, although it “smelled” of terrorism and a woman appeared to have been involved, no final decision would be taken until all of the evidence had been examined.

Soylu was considerably less cautious. Speaking to the media on İstiklal Avenue early on the morning of November 14th, Soylu announced that more than 20 people suspected of links to the bombing had been detained by the police in overnight raids, including the woman seen in the CCTV footage. He added that the attack had been ordered by the People’s Defense Units (YPG), the military wing of the PKK’s Syrian affiliate, the Democratic Union Party (PYD). In another statement to the media shortly afterwards, Soylu accused the US – which has partnered with the YPG in the war against the Islamic State – of responsibility for the bombing, declaring that Turkey would not accept a message of condolence from the US ambassador in Ankara and that Turkey should reconsider its alliance with Washington.

Later in the morning of November 14th, the Istanbul police released a statement naming the woman in the CCTV footage as Ahlan Al-Bashir, a 23 year-old Arab Syrian national. The statement claimed that she had confessed to being a trained by the YPG as a “special intelligence operative” and to crossing into Turkey from Turkish-occupied areas of Syria in order to carry out the attack. Subsequent police statements claimed that Al-Bashir was part of a YPG “sleeper cell” and had spent four months creating cover by working in an Istanbul textiles sweatshop with a man “posing” as her husband.

The Istanbul police released a number of videos, including one of Al-Bashir being roughly handled as she was frogmarched through Istanbul police headquarters. They also released a still photograph of her standing handcuffed between two Turkish flags, clearly terrified and with her face showing marks consistent with her having been badly beaten.

IMPLICATIONS: The PKK has a long history of often appalling acts of violence, including several campaigns to hurt the Turkish tourism industry by targeting non-combatants. İstiklal Avenue is popular with tourists as well as locals. However, the most recent PKK bombing campaign to damage Turkish tourism petered out in failure in 2006. Although the PKK has continued to stage attacks in the knowledge that they could cause civilian casualties, that has long since ceased to be their primary aim. A large number of civilians were killed and injured during the PKK’s 2015-16 campaign. But all of the casualties occurred during PKK attacks on the security forces. There is no indication that the security forces were targeted on November 13th.

It is even more difficult to see why the YPG would have staged the bombing. The organization has no record of carrying out attacks inside Turkey. While the US has repeatedly warned the YPG that engaging in terrorism would jeopardize a relationship that has transformed the organization into a powerful and well-equipped fighting force. In summer 2022, under pressure from Moscow, Erdoğan backed away from his threats to stage another military operation against the YPG in Syria – even though he knew that an incursion would boost his popularity ahead of the 2023 elections. It would be irrational for the YPG to give him a pretext to override Russian objections now.

But there are also problems with the claims by some of Erdoğan’s critics that the bombing was a false flag attack by the security forces to try to boost his domestic popularity. There is considerable evidence that, in the past, Turkey has staged false flag attacks from Syria to generate momentum for a military incursion against the YPG. But the perpetrators appear to have tried to avoid causing casualties. While a fatal attack in the heart of Istanbul is bad for the tourism industry – one of the main sources for Ankara’s increasingly desperate need for foreign exchange – it is also damaging to Turkey’s international image.

Yet the inconsistencies and contradictions in the bludgeoning narrative that is being inculcated by Soylu and the government-controlled media are hardly likely to dispel the suspicions of conspiracy theorists. Al-Bashir’s profile is consistent with that of a Syrian refugee, not a member of the YPG or PKK. Although not all have been identified, most of the others who were detained after the bombing appear to be Arabs from Turkish-occupied areas of Syria, which are riven by feuds between jihadist groups rather than being strongholds of the YPG. It is also difficult to understand why a trained “special intelligence operative” planning to detonate an IED would sit waiting next to it in the target location for 40 minutes.

Given the high public profile he adopted after the bombing, if Soylu’s claims turn out to be untrue, he risks even more harm to his credibility, which has already been badly battered by Peker’s tweets and YouTube videos. Starting in spring 2021, Peker publicly detailed how his relationship with the Soylu went back decades, how he had frequently cooperated with Soylu after he became Interior Minister in 2016 and how Soylu had provided him with police protection during tensions with a rival crime group. Peker, who is now in Dubai, said that he had left Turkey in November 2019 after being warned by Soylu that members of the judiciary were planning to prosecute him. Peker claimed that Soylu had promised that he would soon be able to return. Not only had he failed to keep his promise but armed police, apparently acting under orders from Soylu, stormed Peker’s family home in Turkey, frightening his wife and young children. In a milieu which sets great store by family and the principle of “söz senettir”, the Turkish equivalent of “my word is my bond”, such actions are unforgivable – and Peker proceeded to provide details of Soylu’s alleged involvement with organized crime groups, including narcotics traffickers. All of Peker’s claims have denied by Soylu. None has been disproved.

CONCLUSIONS: It is an open secret that Soylu and Erdoğan’s son-in-law Berat Albayrak are bitter foes. After stepping away from politics following his resignation as Treasury and Finance Minister in November 2010, Albayrak has again become involved in policymaking since his close associate, Nureddin Nebati, was appointed to the same post in December 2021. When taken together with his family connection, Albayrak now has considerable access to Erdoğan – and is likely to take advantage of it to express his concerns about Soylu’s attempts to step into the space created by Erdoğan’s absence in Bali.

Yet Erdoğan may not need much encouragement. His own relations with Soylu have also long been strained. The challenge for Erdoğan is that Soylu is very popular with his political partner, the Turkish ultranationalist Nationalist Action Party (MHP). Since Soylu became interior minister, he has overseen the appointment of scores of Turkish ultranationalists to key positions in the internal security apparatus. While it has become commonplace, especially in the predominantly Kurdish southeast of the country, for members of the police paramilitaries to be seen with insignia, such as rings, bearing “Grey Wolf” insignia and sporting the “walrus-style” moustaches favored by Turkish ultranationalists. With opinion polls suggesting that Erdoğan and his Justice and Development Party (AKP) need the MHP’s support to have any chance of winning next year’s presidential and parliamentary elections, Erdoğan may be reluctant to dismiss Soylu beforehand. Yet neither can he afford to do nothing.

In theory and in practice, Erdoğan is both head of state and head of the executive. Turkish law states that, when the president is incapacitated or abroad, his responsibilities pass to the vice president, who is currently Fuat Oktay. Yet it is unlikely that Erdoğan would have been prepared to accept Oktay usurping his prerogatives, such as Oktay taking the decision himself not to accept US condolences for the Istanbul bombing and calling for an end to Turkey’s alliance with Washington. He is much less likely to accept such a challenge to his authority from Soylu.

More in this category: « The İmamoğlu sentence: Will Istanbul Share the Fate of Diyarbakır? Turkey's Real Survival Problem »
back to top