Engulfed in the Gulf: Erdoğan and the Qatar Crisis

The Gulf crisis over Qatar is once again catapulting Turkey into the politics of the Middle East, for which it is woefully unprepared. After a brief attempt at neutrality, Ankara threw in its lot with Doha, condemning the sanctions imposed by a Saudi-led coalition and accelerated its deployment of troops to a new base in Qatar. This decision risks upsetting President Erdoğan's tenuous rapprochement with Saudi Arabia, and reflects the continued ideological prism guiding Turkish foreign policy. But it also reflects a concern with regime security. At least in part, Erdoğan's embrace of Qatar reflects a belief that the same forces that supported the overthrow of Egypt's Muhammad Morsi welcomed the July 2016 failed coup in Turkey and now seek regime change in Doha. If so, Turkey's stance is unlikely to change, indicating a standoff may in the making. 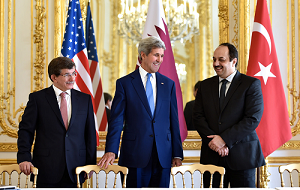