Turkey’s Future: If not a “Big Finland,” Maybe a “Small China?”

The AKP regime does not stand out in the history of the Turkish republic because it is authoritarian. Rather, what makes it unique is that its endeavor to establish uncontested rule is endowed with assets that previous authoritarian attempts lacked. President Recep Tayyip Erdoğan’s regime enjoys a stronger social foundation than any of its predecessors. Erdoğan’s recent alliance with the military has bolstered it further. The collusion of Erdoğan and the military entrenches authoritarianism. But the war with the Kurds threatens to become a threat to the stability of the regime. 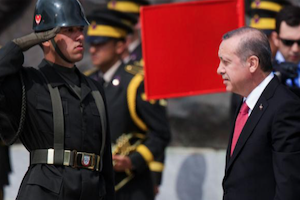 BACKGROUND: Five years ago, the then president of the main Turkish business association, Ümit Boyner, said that Turkey faced a choice: the country could either elect to become a “Big Finland,” democratic and at least relatively prosperous, or prefer to be a “Small China”, authoritarian and relatively prosperous. Economic development during the thirteen years that the Justice and Development party (AKP) has been in power has raised millions out of poverty, but democratic regression has been the defining feature of the last five years of the party’s rule.

After the latest, resounding electoral victory of AKP, resignation characterizes the post-election ruminations of the critics of the regime. The critical voices despair about the democratic prospects of the country. They are not only scared by the authoritarian practices of the AKP regime, but are also inclined to conclude that the majority of the people do not care about democratic liberties and the rule of law.

Indeed, the question is if the choice of the voters – reelecting a party that has become increasingly oppressive – also means that Turkey has crossed a point of no return, that democracy is buried. Liberal intellectuals like Etyen Mahçupyan, a former chief advisor to Prime Minister Ahmet Davutoğlu, believe that the AKP’s hegemony will not be challenged in a generation, but they insist that the underlying sociology of the party’s hold on power is of an emancipating nature. The argument is that the new middle class that has been empowered during the last decade – and which constitutes a major part of AKP’s base – will ensure not only that the party remains in power for maybe several decades, but that this class will spearhead modernization and liberalization.

Nowadays, this optimistic prediction is challenged by disillusioned liberals. Murat Belge, another leading liberal, recently accused Mahçupyan of recycling the old socialist belief, assigning an emancipating potential to a particular social class, this time with the expectation that the conservative middle class is going to perform what was once hoped that the proletariat was going to do.

The concept of the middle class – what it stands for, and who should be called middle class – is also contested. Ersin Kalaycıoğlu, a professor at the Sabancı University in Istanbul, claims that the middle class in Turkey is infinitesimal, and that the lower middle class is no more than around twenty percent of the population. The single biggest group – and the main base of the AKP – is instead the urban poor, which he estimates to be forty percent. The urban poor “are extremely conservative, religious, traditional, nationalist, indeed, chauvinist.” “The socioeconomic base of democracy in Turkey is problematic, because politics is dominated by the powerful class of the urban poor, of a lumpenproletariat.”  And since “there is nothing in the findings of political science that suggest that a democracy which rests on such a base has ever been sustained,” the fate of democracy in Turkey would presumably be sealed.

But other, leftist intellectuals, refuse to surrender the dream of democracy; they see the working class not as an obstacle to democracy, but on the contrary as the essential element of a future democratic movement. Zeynep Gambetti, a professor at Istanbul’s Boğaziçi University, says that the progressive minority of activists and intellectuals in the western part of Turkey will not start to make headway unless it aligns with the workers and with the “Kurdish freedom movement.”

IMPLICATIONS: What is clear is that for these numerically dominant social groups – the urban poor, the lower middle class – the AKP continues to embody economic security and stability. The threat of prolonged political instability if the party was once again denied a majority – and the restarted war against the Kurdish militants – prompted many voters to return to the AKP. The AKP surged, getting five million more votes on November 1 compared to the election in June, when conservatives, who had either abstained from voting in June or had voted for two smaller Islamist parties and for the Nationalist Action party (MHP), re-endorsed it. The AKP won big because the voters craved stability and because they approved of its new, violent stance toward the Kurdish militants.

The long era of stable AKP rule has created a popular perception that one-party rule equals stability. However, the question is if AKP will indeed succeed in delivering stability. Social, ethnic, and cultural divisions have not only hampered democracy in Turkey – as they have bred intolerance of the “others” in society; these divisions have also ensured that authoritarian rule has never been stable either. What makes the AKP stand out in the historical perspective of the Turkish republic is not its authoritarianism, but rather that its endeavor to establish uncontested rule is endowed with assets that previous authoritarian attempts lacked.

The authoritarian regimes of the Turkish republic have all suffered from weak social bases and class conflicts. The elitist one party dictatorship of the Republican People’s Party (CHP) from 1923 to 1950 is the classical example; what was ultimately fatal for that regime was that its economic policies made the peasant majority turn against it. The Democratic Party (DP) regime in the 1950s – which was democratically elected but ended up as an authoritarian regime – based its power on the peasants, but was similarly undermined when its pro-rural economic priorities clashed with the interests of the rising urban and industrial classes. The neoliberal authoritarian order that the military put in place in the 1980s to the benefit of the established business class inadvertently fueled the rise of a rival, “Islamic” business class which challenged the established patronage relations of the politico-economic system. That challenge prompted the military to intervene again in 1997 in order to rein in what was called “green capital”. However, the restored order – which the Chief of the General Staff at the time promised was going to last a “thousand years” – was overturned only five years later, when the AKP came to power.

What sets the AKP apart in this historical context is that it enjoys the support of a broad class alliance which includes the working class, the new conservative middle class and the old business class, which early on realized that the AKP represented a chance to legitimize and secure the neoliberal order. This was the original alliance that lifted the party to power, and the AKP has not only preserved its support base, but has also succeeded in broadening its supporting alliance. President Recep Tayyip Erdoğan did so when he recently brought the military, his former foe, on board as well.

The new “alliance” of Erdoğan and the generals is expressed in the return to the hard-line, nationalistic and militaristic response to the Kurdish challenge that the military has always prescribed. By burying the peace process with the Kurds, restarting the war against the Kurdistan Workers’ Party (PKK), Erdoğan has done the bidding of the military. The military and Erdoğan are now on the same page.

When the AKP came to power, what the military feared most was that the party was going to “sell out” national Turkish interests to Western “imperialists,” by acquiescing to what the generals presumed were American and European designs to carve out an independent Kurdistan from the territory of Turkey. More than anything else, it was these fears that made Erdoğan appear deeply suspect in the eyes of the military. The generals saw Erdoğan as the stooge of the West. Contrary to the myth about them, they did not want Turkey to be “Westernized;” that was something they dreaded. The generals objected to EU-inspired democratization; they said that European-style, “first-class” democracy would be “too much” for Turkey and only lead to the breakup of the country. Instead, they argued that Turkey should deepen its political ties with eastern powers, Russia and China.

Erdoğan, who back then was pursuing EU-reforms, is today following the script of the military: He has vowed to finish off the PKK and embarked on a war to stamp out the Kurdish insurgency. Speaking after the November 1 election, Erdoğan said that “there will be no accommodation, no talks.” As the president has promised, the military operations in the Kurdish southeast of the country continue unabated. Erdoğan has also complied with the wishes of the military by turning his back on Europe and on European-style “first class” democracy, and by asking for Turkey to be admitted as member of the Shanghai Cooperation Organization.

Orhan Bursalı even argues that the “AKP’s greatest ally is the Turkish Armed Forces.”  He writes that Erdoğan is emboldened in his authoritarianism because he is able to count on the “alliance” he has struck with the military.

But one could also say that the military’s “red lines” now ideologically delineate Erdoğan’s exercise of absolute power. If Erdoğan were suddenly to change track and offer the Kurds concessions, a crisis would probably ensue between President and General staff.

CONCLUSIONS: The AKP regime enjoys a stronger social foundation than any other previous Turkish regime. The alliance with the military against the Kurdish militants has bolstered the regime further, and the collusion between Erdoğan and the military entrenches authoritarianism. But the war with the Kurds can also become a threat to the stability of the regime.

More in this category: « Erdogan’s Pyrrhic Victory: The Turkish Election and the Prospects for a Presidential System Turkey the Sentinel -- With a License for Authoritarian Rule »
back to top