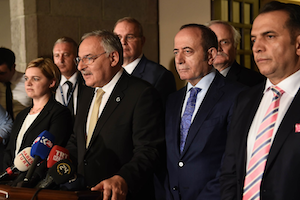 BACKGROUND: As international media and commentators remain focused on Turkey’s democratic travails, and lately, on the ongoing Afrin military operation, Turkey’s political economy has received much less attention. A “neoliberal” consensus has dominated Turkish politics since the 1980s. But how “neoliberal” is Turkey really? And to what extent may the ruling Justice and Development Party (AKP) be called a truly “neoliberal” party?

Turkey’s “neoliberal” roots actually run much deeper than the AKP. The 1980 military coup and the subsequent pro-World Bank and pro-IMF military regime were responsible for forcing through the initial neoliberal transformations of Turkey’s political economy in the 1980s and 1990s. During this period Turkey developed an export-oriented economy, set up neoliberal institutions, weakened workers’ rights and restricted trade unions. From the beginning there was a paradoxical need to use the power of the state to safeguard the new neoliberal system. Far from being rolled back, the state was actively rolled forward.

After inheriting this system in 2002, the AKP merely continued to implement the IMF reforms handed to Turkey amid the heat of the 2001 economic crisis. A period of rapid and “relatively evenly spread” GDP growth followed, allowing the AKP to secure its reputation as a steady hand on the economy. According to World Bank figures, absolute poverty levels have dropped considerably. On paper, the situation looks good. But what has actually been going on?

To understand the twisting terrain of neoliberal policy making under the AKP, one would do well to examine the core tension around which the party is structured. There is a fundamental tension between the interests of its core constituencies – the religiously conservative lower-income groups and “Islamic” businesses – and those of the party’s neoliberal-minded technocrats and its election-focused leaders. The AKP’s stance towards healthcare exemplifies this tension. From 2002 to 2012, the number of private hospitals in Turkey grew at an average of 14.8 percent per year. In comparison, public sector hospitals grew at a much smaller rate of 1.5% per year. While government support for private hospitals appears to connote a classic neoliberal society – a two tier system with quality services for the rich and underfunded state services for the poor – in the context of Turkey under the AKP, political pressure flowing upwards from the party grassroots has in certain cases checked neoliberal policy making. A recent essay by Tom Dorlach demonstrates this apparent paradox. From 2010-12, the Turkish public saved some 20 billion Turkish Liras in pharmaceutical expenditure. This was mostly achieved by introducing strict price controls that “reduced the profit margins of pharmaceutical producers and distributors (the populist policy solution), rather than by privatizing the cost of medicines through, for example, raising out-of-pocket payments (the neoliberal policy solution).”

IMPLICATIONS: The AKP’s inclination to intervene to protect its supporters is also evident in the way public sector contracts are awarded.  Referring to the mega project “Canal Istanbul,” Kemal Kılıçdaroğlu, leader of the main opposition Republican People's party (CHP), said “This project is not about people. It's about making AK Party supporters rich." The same has been said of the third Istanbul airport that is under construction and the reportedly underused private-public-partnership-funded third Bosporus Bridge. These megaprojects serve the dual role of enriching a loyal business elite while also showing the populace that the government is transforming the country into a truly worthy civilization center.

The extent to which the Turkish state engages in crony-capitalism still has the power to shock and astonish. According to Esra Gürakar’s recent study of Politics of Favoritism in Public Procurement in Turkey, the Turkish government has made no less than 150 amendments to the Public Procurement Law (the law that regulates the award of state contracts). These amendments have increased discretion in awarding contracts. The number of contracts awarded by open auction fell from 100,820 in 2005 to 65,016 in 2014. Meanwhile, the number of contracts awarded through less competitive and less transparent methods rose from 41,157 to 58,680.

Increased discretion in awarding contracts facilitates substantial favoritism in Turkey’s political economy. The European Union continuously criticizes the public procurement processes in Turkey as “non-transparent and discriminatory.” The deliberately de-fanged Court of Accounts, designed as a check on opaque dealings, has been non-functioning for years. As Gürakar points out, in the AKP era “corruption has been centralized and exists and prevails through making highly debated, notorious new laws and regulations.” A new class has been on the rise since 2002, the Islamist nouveau riche: businesses that use religion to form connections with the government.

Meanwhile, the more standard neoliberal practice of selling off public land has risen drastically under the AKP. The government has pursued aggressive policies of deregulation and commodification of both urban and rural space. A 2003 law provided the minister of finance with the ability to terminate licenses on public properties in order to sell them off. Further laws in 2003 and 2004 expanded this power to include schools and hospitals. Often there has been little public consultation. Popular rage and frustration over such policies came to a head with the famous Gezi Park protests in 2013, when protestors from diverse sections of society assembled to stop the government from paving over one of Istanbul’s few remaining green spaces to put up an Ottoman-style shopping complex. Although construction on Gezi Park was miraculously halted, the protests were brutally suppressed, and the strength of the state harshly revealed. In the words of the political philosopher Noam Chomsky, the plan for the Gezi Park was less as a microcosm of authoritarianism than an emblem of the great “wrecking ball of neo-liberalism”: short-sighted destruction of shared resources and spaces in pursuit of quick but potentially unstable growth.

An ever-expanding, overcrowded city, Istanbul actually needs green spaces far more than new commercial centers. An inordinate amount of shopping malls have appeared across the country in recent years. The total nationwide stood at 145 in 2007. By 2017 that figure had leapt to 375. Istanbul alone has 117. Many commentators, including Turkish Deputy Prime Minister Ali Babacan back in 2014, have voiced concerns of a bubble. There is a risk that the poorly regulated construction sector finishes with a bust to rival Spain and Ireland in 2008. In 2013, some 23 shopping malls were converted into hospitals, private schools or office buildings. According to surveys, some 10 percent of existing shopping malls are in the process of exiting the market, even as developers plan to build more. The total number is expected to reach 448 by the end of 2018.

Due to an absence of regulation, many of the malls have been built in city centers, hastening the closure of many smaller businesses in the vicinity. On March 5, 2018, the Confederation of Merchants and Craftsmen (TESK) head Bendevi Palandöken called for the introduction of government measures to address the negative impact in Turkey’s retail sector. “The opening of so many malls and retail chains in an uncontrolled and unplanned manner has hit merchants and tradesmen. Measures must be adopted and strict standards must be introduced in this field … Where else in the world are malls open 14 hours a day?” he said in a statement.

Palandöken’s comment of malls “open 14 hours a day” indirectly touches on another aspect of neo-liberalism under the AKP: long working hours and reduced workers’ rights. Turkey’s “economic miracle” is largely based on manpower for construction, farming and textiles, which are labor-intensive industries that require a constant supply of cheap labor. “Pro-business” deregulation and weak trade unions ensure the power-balance tilts in favor of employers. High levels of informal “unregistered” workers also help to keep production costs down and Turkish exports “competitive,” no matter the hidden human cost. Labor conditions are often stressful and dangerous. This is the shadow image of Turkey’s “miraculous” GDP growth.

The studies that highlight these generally poor conditions are numerous. A total of 2,006 workers were killed in workplace accidents in 2017, according to a report by the Workers’ Health and Work Safety Assembly (İSİGM). This is sadly unsurprising, considering 44 percent of Turkish workers believe their work health and safety conditions are poor, according to a recent poll conducted by the Confederation of Progressive Trade Unions (DİSK-AR). Meanwhile, some 54 percent of all workers said they were “struggling to make ends meet” and more than 30 percent of workers do overtime in Turkey, where working hours are already much longer than the OECD average.

The government’s lackluster, unconcerned attitude towards labor conditions has drawn fierce criticism – a strange, potentially paradoxical situation, considering that lower-income groups account for one of the AKP’s core constituencies. In 2014, a mining disaster in the town of Soma claimed 301 lives – one of the worst in the republic’s history. When asked to deliver a statement, Erdoğan shocked commentators by telling the relatives of dying and dead miners that “these types of incidents are ordinary things,” effectively deflecting any kind of responsibility on the government’s behalf. Various reports said the government had repeatedly ignored safety concerns about the privately owned mine that were raised by opposition MPs as recently as two weeks prior to the catastrophe.

Since 2014, the political climate has become even more problematic, especially in the wake of the 2016 failed coup attempt. In February 2018, Turkish daily Cumhuriyet published a report stating that 400 construction workers had died building Istanbul’s third airport. The government immediately blocked the article. An official statement was issued a few days later, stating that 27 and not 400 workers had died. When asked for a statement from this writer, the İnşaat İşçileri (Construction Workers) trade union, which represents approximately 100 workers at the airport, said the original figure of 400 was accurate, citing the testimonies of dozens of workers who had spoken to Union. According to Mehmet Kızmaz, the journalist responsible for the report, the families of the workers who had lost their lives have been offered 10,000 Turkish Liras in order to keep quiet. No further investigation has been launched so far, nor is there likely to be one. When Erdoğan visited Soma after the mine disaster, he was heckled by angry protestors, and he had to take refuge in a greengrocer shop to escape harm. But a notable silence shrouds workers’ deaths at the new Istanbul airport. The issue appears to have been sealed with a heavy lid.

CONCLUSIONS: So how neoliberal is Turkey? Arguably, the AKP's Turkey is less a neoliberal state than a majoritarian, authoritarian system that has assimilated various aspects of neo-liberalism for its own, political and economic ends. This system features a combination of a liberalized economy with weak trade unions, poor workers’ rights and a “rolled forward state” with a pervasive, centralized form of crony capitalism. It is a system that has come at a significant social cost and which relies on potentially unstable growth.

Picture credit: By amerikaninsesi.com via Public Domain  accessed on March 8, 2018

More in this category: « Time to try something new: A turn to the left to get out of Turkey's impasse? Turkey's Kurds at the Crossroads: To the Political Graveyard of Turkey or To Be the Gravediggers of Turkish autocracy? »
back to top