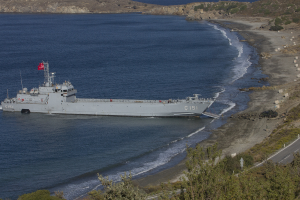 BACKGROUND:  On August 11, Turkey dispatched the seismic research vessel Oruç Reis, escorted by warships, for drilling in contested waters in the eastern Mediterranean, putting NATO allies Turkey and Greece, with a tormented history of enmity and mutual suspicion, once again on a collision course. On August 14, after a meeting of the EU Foreign Affairs Council – at which Greece and Cyprus, supported by France, unsuccessfully pressed for the imposition of sanctions on Turkey – the union urged Turkey to deescalate the military tensions over the drilling rights in the eastern Mediterranean. On August 16, Ankara defiantly announced that another seismic research vessel, Yavuz, will continue its work exploring energy resources off Cyprus until mid-September.

Turkey and Greece have long-standing, unresolved issues of maritime delimitation and jurisdiction, and the discovery of energy resources in the eastern Mediterranean has raised the stakes significantly. Meanwhile, mutual intransigence, but most importantly, the growing power of ultranationalists in the Turkish state is exacerbating tensions.

The controversial maritime agreement that Turkey signed with the Government of National Accord (GNA) of Tripoli in Libya in November 2019 manifested Ankara’s maritime ambitions, with Turkey extending its claim to an Exclusive Economic Zone to the south of Crete, cutting through between Cyprus and Greece. However, the maritime counter-delineation agreement of August 6, 2020 between Greece and Egypt has staked out rival claims to maritime jurisdiction and exclusive economic zones in the eastern Mediterranean.

Saying that “we are proud to wave of glorious Turkish banner in all our seas,” President Recep Tayyip  Erdoğan has pledged to protect “every swath of our 462,000 square kilometers of Blue Homeland with great determination” and has vowed to “undertake every possible duty that may come.” Erdoğan, though, is not the progenitor of Turkey’s new, expansionist naval doctrine. The Blue Homeland is the product of the ultranationalist-secularist officers with whom the Turkish president was once at loggerheads but with whom he had to forge an alliance after his erstwhile allies, the Gülenists, tried to depose him; as such it is a testimony to the power that the ultranationalists within the Turkish state have increasingly come to wield.

IMPLICATIONS: The term Blue Homeland was originally coined by Rear Admiral Cem Gürdeniz in 2006. Gürdeniz was later arrested along with hundreds of other senior officers, who were accused of having plotted the overthrow of the government of the Justice and Development Party (AKP). He was sentenced to 18 years in prison in 2011, but was released in 2015 following the Faustian pact that Erdoğan concluded with the ultranationalist military officials that the Gülenists had purged. The deep state nationalists made a come-back in grand style, in many cases returning to their key positions in the security establishment. In the wake of the failed coup, retired Rear Admiral Gürdeniz rose back to prominence, and his Blue Homeland concept, which was developed into a full-fledged politico-military doctrine, became the new cornerstone of Turkey’s assertive foreign policy.

The ultranationalist secularists, who are also referred to as Eurasianists, have been instrumental in masterminding the rapprochement between Turkey and Russia that had begun on the eve of the 2016 coup attempt and which has been pursued in its aftermath. Typically, they espouse anti-American and anti-NATO views, viewing the United States as a threat to Turkey’s national security, notably because of the American support for the Kurds in Syria.

What retired Rear Admiral Gürdeniz terms  the “Atlantic structure” or “front”  --  that is, NATO and the EU – is held to be using Greece to undermine Turkey’s sovereignty and to confine it to the Gulf of Antalya, leaving it with 41,000 square kilometers of maritime jurisdiction. Blue Homeland and closer cooperation with Russia and China are two facets of the counter-strategy that the ultranationalist officers have devised and which they prescribe to foil the purported machinations of the Atlantic camp. As the ultranationalist officers see it, Turkey needs to project power and establish supremacy in the eastern Mediterranean in order to offset imperialist designs on Turkey and to avoid meeting the same fate as the Ottoman Empire.

The progenitor of Blue Homeland argues that the demise of the Ottoman Empire at the end of the First World War was ultimately the consequence of its inability to establish itself as a maritime power. In Cem Gürdeniz’s reading of history, the treaty of Sèvres in 1920 – which partitioned what was left of the defeated Ottoman Empire, leaving 120, 000 square kilometers for a rump Turkish state in north and central Anatolia that would have had only a 600 kilometers Black Sea coastline, and no access to either the Aegean or the Mediterranean – could be imposed because the Ottoman Empire had never been a maritime power.

Gürdeniz and like-minded ultranationalist officers claim that Turkey is today facing a “second Sèvres.” Consequently, the Blue Homeland is not merely a maritime doctrine, but also a blueprint for national liberation. It has recently been enshrined as a sacrosanct national doctrine, at equal par with that of the National Covenant of 1920 that delineated the borders of the Turkish homeland that was to be liberated in the Turkish War of Independence (1919-1922) that ensued.

In the words of Cem Gürdeniz, “Today’s National Covenant is Blue Homeland. The fight for it is the fight for the next hundred years.”  More importantly, the Ministry of National Defense on August 11 declared that “Inspired by our glorious history and the love, trust, and prayers of our beloved nation, we are forever dedicated to defending our rights, relations, and interests in our Blue Homeland as we have done until today. Our covenant is our Blue Homeland.”

CONCLUSIONS: Turkey’s claim to a maritime homeland inevitably invites confrontation since the homeland is by definition non-negotiable. The concept of Blue Homeland speaks of an irredentism that was in fact alien to those who once fought to preserve a Turkish homeland and who, when necessary, stepped back from pushing territorial demands and cut diplomatic deals with their adversaries.

By contrast, the promoters of the Blue Homeland are unequivocally opposed to exploring a diplomatic resolution to the eastern Mediterranean dispute with Greece. Rear Admiral Cihat Yaycı, who was the chief of staff of the navy until recently and who is the architect of Turkey’s maritime border agreement with Libya,  is adamant that Greece is not Turkey’s interlocutor in the eastern Mediterranean, because, as he claims, “there are no problems in that region between the two countries.” Yaycı alleges that the only existing problem is that Greece makes “unacceptable, illegitimate” demands on [Turkey’s] maritime zone.

Lieutenant General (ret.) İsmail Hakkı Pekin, a former head of Turkish military intelligence who is now the deputy chairman of the Vatan (Homeland) Party –home to several retired, ultranationalist, Eurasianist officers – is more outspoken than his former colleagues. According to him, collision with Greece is ultimately inevitable because Turkey “needs to prove its strength, for it is impossible to reach a deal with Greece at the negotiating table.”

Turkey’s and Greece’s zero-sum game in dealing with the issues of maritime delimitation and jurisdiction has for decades posed a problem for peace and stability in their region. Turkey’s Blue Homeland doctrine, the endeavor to establish Turkish naval supremacy in the eastern Mediterranean – a testimony to the clout of anti-Western ultra-nationalism in the Turkish military and state – ensures that the eastern Mediterranean will be in perpetual conflict.

Cengiz Çandar is Distinguished Visiting Scholar at the Institute for Turkish Studies, University of Stockholm and Senior Associate Fellow at the Swedish Institute of International Affairs (UI). He is the author of Turkey's Mission Impossible, War and Peace with the Kurds (Lexington, 2020)

More in this category: « The EU and De-escalation in the Eastern Mediterranean From Pro-Americanism to Anti-Imperialism: The Historic Turn of the Turkish Nationalist Right »
back to top