Creeping Shadows: YAŞ, Hulusi Akar and the Spectre of the End of the Erdoğan Era

The promotions and assignments announced after the August 4, 2021 annual meeting of the Supreme Military Council (YAŞ), which is responsible for deciding appointments in the Turkish high command, reaffirmed President Recep Tayyip Erdoğan’s control over what had once been the most powerful institution in the country. Nevertheless, in recent weeks there has been considerable speculation that a career army officer, namely former Chief of the Turkish General Staff (TGS) and current Defense Minister Hulusi Akar, is trying to position himself as Erdoğan’s heir apparent. 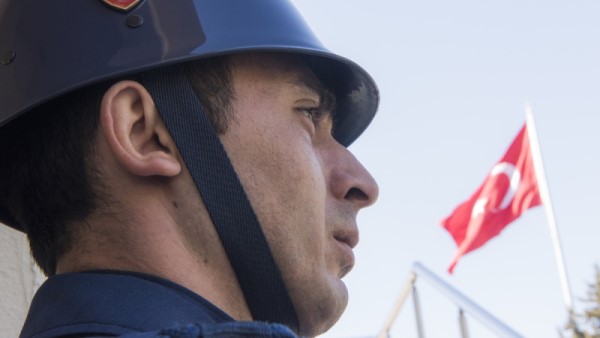 BACKGROUND: During the era of military tutelage, the ability of the TGS to shape both government policy and the public space meant that the impact of the decisions taken at YAŞ extended far beyond the careers of the officers concerned. The age limits for each rank and the system of seniority within them meant that YAŞ decisions often provided clues as to the identity not only of the next chief of staff but also of their probable successor – and thus, depending on their personalities, how determinedly the TGS was likely to try to impose its will on the civilian authorities over the years ahead.

But, as with its political influence as a whole the military’s control over the decision-making processes at YAŞ was not always constant or total. For example, in the run-up to the YAŞ meeting of August 4, 2002, there was considerable unease in the high command over Land Forces Commander General Hilmi Özkök, the most senior of the candidates to take over as chief of the TGS. Military intelligence reports suggested that Özkök did not share the hard-line secularist views of the majority of his colleagues and that his family had links to the Naqshbandi religious order – with which Erdoğan was also closely associated. Concerned that Özkök would fail to confront Erdoğan’s newly formed Justice and Development Party (AKP), which appeared poised to win the next general election, Chief of Staff General Hüseyin Kıvrıkoğlu offered to postpone his retirement for a year in order to force Özkök into early retirement. But the initiative was blocked by Devlet Bahçeli, chair of the Nationalist Action Party (MHP). For reasons which remain unclear, Bahçeli had convinced himself that Özkök shared his own hard-line Turkish nationalist views. He used the MHP’s membership of an increasingly fractious tripartite coalition government to block the extension of Kıvrıkoğlu’s command. Özkök was duly appointed chief of the TGS in August 2002. It was four years before a hardliner was able to take over as supreme commander of the Armed Forces, by which time Erdoğan was firmly ensconced in power.

But it was not until after the still largely unexplained coup attempt of July 15-16, 2016, that Erdoğan – aided by Hulusi Akar and General Yaşar Güler, who succeeded Akar as chief of the TGS in 2018 – regularly began to use YAŞ as a means of purging the officer corps of anyone believed to be insufficiently subservient to him, particularly those with strong Kemalist views. Unlike the high public profile of the purges conducted through detentions and prosecutions of alleged Gülenists, YAŞ enables Erdoğan to reshape the military more discreetly by forcing officers into retirement. The meeting of August 4, 2021, was no exception, resulting in the enforced retirement of a large number of Kemalist officers.

Yet retirement provides no guarantee against being targeted further. On August 18, 2021, the Court of Appeal approved the life sentences given to 14 retired and now elderly former high-ranking officers for their alleged role in what has become known as the “February 28 Process” – after the date in 1997 when, at a meeting of the National Security Council (MGK), the TGS presented a coalition led by the Islamist Welfare Party (RP) under Prime Minister Necmettin Erbakan with an ultimatum to crack down on Islamist activity. There is no doubt that the February 28 Process was masterminded by the TGS. But it could not have succeeded without extensive support from politicians, journalists, academics, NGOs, businesspeople, judges and prosecutors, and a sizable proportion of the general public. Indeed, the decisive moment came not in February 1997 but in June 1997 when the cumulative impact of resignations from the RP’s coalition partner, the True Path Party (DYP), meant that the government lost its parliamentary majority and tendered its resignation.

In Turkey’s now highly politicized judicial system, no judge would have dared convict the 14 former officers without being confident of Erdoğan’s approval. One of the reasons that he approved such harsh sentences against the officers will have been personal vindictiveness. The February 28 process eventually led to Erdoğan being forced to resign as mayor of Istanbul and being prosecuted for reciting an Islamist poem – even if his conviction and the four months he spent in jail in 1999 elevated Erdoğan to national status, while the five-year ban given to Necmettin Erbakan for his role in the RP-DYP coalition ultimately helped clear the path for Erdoğan to take over the leadership of the Turkish Islamist Movement. Yet vindictiveness alone does not explain why Erdoğan singled out military personnel who had alleged participated in the February 28 process but has been so much less vigorous in his pursuit of the civilians who took part.

IMPLICATIONS: The February 28 trial is arguably as much about the present as the past. Singling out members of the military makes it easier for Erdoğan to continue to present the February 28 process in simplistic, almost Manichean, terms as a struggle between undemocratic and democratic forces – with the implication that the same struggle is continuing today. By drawing on the past, albeit a distorted version of it, Erdoğan can thus present himself to his supporters as the defender of democracy in the present – and thus invert a situation in which, in terms of human rights abuses and democratic values, he has long since been the victimizer, not the victim.

More insidiously, by highlighting a past initiative to undermine an elected government Erdoğan is further fueling a siege mentality among his supporters and the belief – which he has repeatedly actively encouraged – that Turkey is constantly under assault from conspiracies to try to prevent its otherwise inexorable rise to greatness under his leadership. The conspiracy theories, most of which are allegedly masterminded from abroad, are often breathtakingly absurd. But that has not prevented them from being widely believed and becoming a mainstay of Erdoğan’s continued grip on power – although how long this grip can continue and what will happen afterwards are both unclear.

After the transition to an executive presidential system in July 2018, there were clear signs that Erdoğan was grooming his son-in-law Beral Albayrak as his successor. Not only did Erdoğan give Albayrak overall control of economic policy but on August 21, 2020, in a rare departure from his normal practice, Erdoğan publicly deferred to Albayrak during a ceremony to celebrate an apparent major natural gas find in the Black Sea. But Albayrak’s management of the economy proved to be a disaster, prompting his resignation on November 10, 2020.

In reality, there was never much prospect of Albayrak being able to assume the presidency. An uninspiring public speaker without a popular support base of his own, he was almost entirely reliant on Erdoğan for his political career. His personal arrogance and penchant for interfering in areas which lay far outside his remit had deeply alienated many in the AKP. Few mourned his departure,but Erdoğan could have been confident that, if he had stepped down as president and was succeeded by Albayrak, he would at least have been protected against prosecution. The same could not be said of Interior Minister Süleyman Soylu. After Albayrak’s resignation, Soylu was widely regarded as the second most powerful member of the government, whose widespread public support meant that he was in a strong position to eventually succeed Erdoğan. But Soylu’s relations with Erdoğan had long been strained, while Albayrak and Soylu were irreconcilably bitter foes. Even if there is no prospect of Albayrak ever acceding to the presidency, he still has the ability – not least through his access to Erdoğan – to make it extremely difficult for Soylu to do so. Since May 2021, he has also been badly damaged by a series of posts on social media by exiled Mafia boss Sedat Peker, alleging that Soylu has close links to organized crime. Even if many of Peker’s allegations are yet to be confirmed, their sheer volume – and Soylu’s own evasive responses to them – has created a widespread public perception that they are substantially true.

Hulusi Akar’s chances appear even slimmer. During his military career, Akar developed a reputation for remaining quiet during discussions before finally expressing his support for whatever the majority view happened to be. In addition, Akar has consistently refused to provide a full explanation of his actions in the run-up to the July 15-16, 2016, particularly the extent to which he was forewarned and why he failed to take adequate preventative measures. One of the most striking patterns in the testimonies of those officers who have admitted knowingly participating in what they thought was a genuine coup is the number who have said that they thought that it was being led by Akar. This does not mean that Akar ever had any intention of overthrowing the government. But, given that some of these officers worked very closely with Akar for a number of years, it does raise questions about what he said or did not say whenever Erdoğan and his government were discussed.

Under such circumstances, it is difficult to see how Erdoğan would back Akar as his successor. Nor does Akar have a popular support base of his own. Meanwhile, the continuing questions about the events of July 15-16, 2106, and Akar’s unquestioning subservience to Erdoğan, has antagonized even many of his former colleagues. In addition, although it is not an obstacle to him serving in a subordinate role in an Erdoğan-led government, Akar’s career in an institution that many regard as having aggressively targeted the Turkish Islamist Movement in the past is a major impediment to him securing sufficient support from AKP voters to win a presidential election.

CONCLUSIONS: The speculation about Hulsui Akar potentially becoming president is probably less revealing about Akar’s own chances of succeeding Erdoğan than it is about the growing realization, amongst both his supporters and his opponents, that the Erdoğan Era is gradually drawing to a close. Even if the timing of its end is unclear, the size of the challenge facing his successor is not.

The absence of the rule of law, and a bureaucracy in which – though it still contains pockets of expertise – advancement is dependent on perceived loyalty to an individual, will take years to redress. Most dangerous has been the poisoning of Turkey’s social fabric with conspiracy theories in which Erdoğan’s domestic critics and opponents are increasingly labelled agents of foreign powers. When combined with the sense of empowerment that has come from Erdoğan’s endorsement of his supporters’ use of violence during the events of July 15-16 2016, there is a real risk that – once his departure becomes imminent – there will be severe social unrest.

Image Source: Office of the Chairman of the Joint Chiefs of Staff by Petty Officer 2nd Class Dominique Pineiro

More in this category: « Playing with Fire: Turkey’s Social Democrats Turn Against Migrants Five Years after July 15: Erdogan’s New Turkey and the Myth of Its Immaculate Conception »
back to top