Turkey is actively seeking to restore the Silk Road, and the country’s massive investment in railway expansion is an expression of this ambition. Turkey’s massive railway projects are certainly going to bolster its ambitions to be a major transport corridor, which in turn will have geo-strategic consequences. When the Baku-Tbilisi-Kars rail line becomes operational by 2014, it will offer for the first time the Caucasian and Central Asian post-Soviet states an east-west transit corridor not under Russian control, breaking Moscow’s domination which began in the late 19th century when rail lines first began to be built there.

BACKGROUND: On 4 August Turkish Prime Minister Recep Tayyip Erdoğan piloted the first train through the Marmaray Rail Tunnel underneath the Bosporus in İstanbul. The Marmaray facility stretches 8.5 miles in all, including a 4,593-foot submerged tube section tunnel, the deepest of its kind in the world at 183 feet, which symbolically links Europe and Asia. The Maramaray rail project is but one element in Turkey’s ambitious plans to more than double its railway network over the next decade under its 2023 Master Plan, the centenary of the Republic, with the various initiatives projected to cost $23.5 billion by then for a total of $45 billion up until 2035. Turkish Transport Minister Binali Yıldırım announced last month that at least 1,500 miles of high-speed rail line would be built in the next five years to connect 14 different cities.

The first rail system in the Ottoman Empire was constructed in 1856 by a British company, an 81-mile line connecting Izmir with Aydın. Railways were developed elsewhere around the empire by other private British, French and German companies awarded concessions before being nationalized in 1927, when the country had roughly 3,400 miles of railway track in operation. Railway development slowed during the early years of the Republic and was ignored from 1950 until recently as the government favored the expansion of the country’s road network.

In a complete about face, in the past few years the government of the Justice and Development Party (AKP) has increasingly come to see improving the country’s rail network as the preferred solution for carrying freight, with new freight hubs planned around the country that will use the high-speed lines and the Marmaray Crossing to move both indigenous and international cargoes. A Japanese-Turkish consortium began the construction of the Marmaray Crossing project tunnel in 2004, funded by the European Investment Bank and the Japan Bank for International Cooperation. 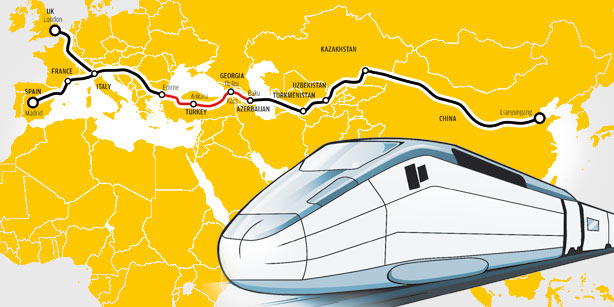 The rail tunnel will be used by suburban and long-distance services as well as freight, connecting İstanbul’s European and Asian shores, adding a light capacity of 75,000 people per hour in each direction. Erdoğan lauded the accomplishment, saying, “The Marmaray project is the dream of our ancestors. It has been our privilege to realize it and complete it. We will be travelling between continents, from Asia to Europe and back again. This project will link the Beijing-London rail line.”

IMPLICATIONS: Turkey is currently the 16th largest economy in the world, and the growth of its railway sector is set to further bolster its economic expansion. Recent research by Goldman Sachs predicts that Turkey’s economy will be the second biggest in Europe and the world’s ninth largest by 2050. The Organization for Economic Cooperation and Development (OECD) estimates that Turkey will be the world’s third fastest growing country after China and India by 2017 and that it will overtake India after 2017 to become number two.

When Turkey’s railway upgrades and expansion are complete, TCDD estimates that the country’s traditional and historic trade route between Asia and Europe can be revived leading to a potential $75 billion trade flow per annum. Turkey is the sixth country in Europe and eighth in the world to be operating high-speed trains.

Turkey intends over the next decade to make significant investments in its railway network, expanding its coverage to more than 16,000 miles, nearly double the current 7,500 mile network. Impressively, the high-speed train lines are expected to constitute 6,200 miles of the new track. All the new high-speed lines will be double-track and electrified, and with line speeds of 150 mph.

In August 2011 the Turkish state railways (TCDD) opened a 192-mile long, $567.9 million high-speed rail line connecting Ankara to central Konya province, expanding the first section, between Ankara and Eskişehir, inaugurated in 2009. The project forms part of the 330-mile İstanbul-Ankara high-speed rail line, currently under construction, which, like the Marmaray tunnel, is also scheduled for opening on 29 October, the centenary of the Turkish Republic.

Turkey is actively seeking foreign investment to develop its railway projects. The European Investment Bank over the last five years has provided $3.33 billion financing for the Turkish rail system. Turkey has also adopted legislation to open up the country’s railways to foreign investment. Railways in Turkey were formerly a state monopoly, with the Ministry of Transport and Communications overseeing TCDD’s railway operations. TCDD, the country’s vertically-integrated railway company, has seven regional directorates around the country. In addition to operating and maintaining the railways, TCDD also has an extensive manufacturing capability in both rolling stock and track components. In May 2013 legislation to reform the TCDD, allowing private operators access to the state’s railway infrastructure, became law. Besides attracting foreign investment the TCDD reforms are also intended to comply with EU directorates. TCDD accordingly is separating infrastructure, passenger and freight operations in its reform efforts.

The Ministry of Transport and Communications has defined three main targets for the rail sector, including providing  an advanced and affordable high-speed rail service, upgrading existing track to allow increased operational speeds and streamlining TCDD through restructuring and privatization. Under the reforms, the first privately operated train is scheduled to begin service as early as 2014. While private sector involvement initially will be limited to freight transportation, passenger traffic on privately built and operated rails is scheduled to begin by 2018.

With the country’s new liberalized railway investment climate, Germany’s Deutsche Bahn, French companies SNCF and Thales, Japan’s Mitsubishi and South Korea’s Hyundai Rote are among the foreign companies that have expressed interest in participating. While nothing is as yet definite, given the newness of the reform legislation, many specialists believe that most private capital in Turkey’s railway infrastructure will be in the form of BOT (Build Operate Transfer) developments.

Turkey’s railway ambitions do not stop at its frontiers. Turkey has borders with eight countries, and its government is thinking big. Speaking at the third Summit of the Cooperation Council of Turkic Speaking States in Gabala Azerbaijan, Turkish President Abdullah Gül on 16 August made the geopolitical implications of the railway expansion clear: "The Turkic-speaking countries need to restore the historic Silk Road which has both political and economic significance for the world. The modern concept of the Silk Road comprises collaborative energy, transport and logistics projects that will aid the development of the entire region. All of these projects will transform the Turkic world into the center of the world economy and development." Gül made particular mention of the construction of the Baku-Tbilisi-Kars (BTK) railway, scheduled to become operational next year, which, combined with the Marmaray rail tunnel in İstanbul, will provide a direct rail link between West Asia and Europe.

Gül noted that "the project will change the dynamics of the region…  This project will bring together Turkic states through the railway and contribute to the development of the economy and trade between these countries… These projects will give a strong boost to the economy and welfare of the inhabitants of these states. Kazakhstan and Kyrgyzstan are also showing interest in the project and this would mean all the Turkic speaking states will be connected by a single railway project."

China is notably also keenly interested in Turkey’s railway potential along with that of the post-Soviet states. Three years ago TCDD Director General Süleyman Karaman said in the wake of an agreement whereby Turkish and Chinese companies will jointly construct high-speed train lines in Turkey, "We need $45 billion to meet Turkey's target to construct 3,700 miles of high-speed tracks and 2,500 miles of conventional railroad tracks by 2023. Within the scope of the agreement signed with China, China will finance $28 billion of this target."

CONCLUSIONS: Turkey’s massive railway projects are going to bolster its ambitions to be a major transport corridor, which in turn will not lack geo-strategic consequences. When the Baku-Tbilisi-Kars rail line becomes operational by 2014, it will offer for the first time the Caucasian and Central Asian post-Soviet states an east-west transit corridor not under Russian control, breaking Moscow’s domination which began in the late 19th century when rail lines first began to be built there.

Should all of Ankara’s ambitions come to pass, which does not seem unlikely, the only loser in would be Russia’s traditional political and economic dominance of the Caucasus and Central Asia, which was carried – along railway lines.

Read 11747 times Last modified on Tuesday, 15 April 2014
Tweet
Tagged under
More in this category: « A New Prospect for Cyprus: Can the Conflict End Without Reunification? Could Class Dynamics Bring Back Moderation to Turkey? »
back to top