Fifty Years after the Ankara Agreement: the Need for New Commitments

Since the signing of Ankara Agreement in 1963, European enlargement towards Turkey has been evolving in a volatile momentum. Although Turkey’s eligibility for full membership has been confirmed by the agreement, the experiences accumulated during the last 50 years demonstrate that the Turkish case amounts to a “failed enlargement”, as the lack of real commitment and clear membership perspective dilutes the process. Even if the full membership continues to be an “officially” shared objective, the Turkish accession is likely to be prolonged during the upcoming years if a new vision is not introduced in light of these experiences.

BACKGROUND: It is a general understanding that Turkey has been waiting on the doorsteps of Europe since its application for full membership in the European Community in 1987. In fact, the country is a latent member of the European Union (EU) since the last 50 years and is waiting for a real commitment from both European and domestic political elites for gaining the full membership status. The Ankara Agreement signed in 1963 is formally an “Association Agreement”, but the enthusiasm provoked by the Turkish demand has at that time brought the European political elite to the point of engaging in an irrevocable path.

The Turkish accession process began in 1959 with the ruling Democrat Party’s application for associated membership in the European Economic Community (EEC, the EU’s predecessor), in a context of diplomatic competition between the Community and the European Free Trade Area (EFTA) pioneered by the United Kingdom. The Turkish demand was accepted by the Community as an opportunity to consolidate its international status. After a preparation period which was also prolonged with the intervening Turkish military coup of 1960, the Ankara Association Agreement was signed in 1963.

The Agreement was ultimately aiming at the completion of a customs union but did also declare Turkey’s right to full membership, once the custom union would be completed. This determination notwithstanding, relations were pursued in a narrow context with limited communication until the 1980s, allowing the two sides to forecast each other’s attitudes and behaviors. The Turkish-European dialogue was based on technical issues and economic objectives, notably the definition of rules for each transition period before the customs union and gradual approximation of economy policies. Within this scheme of mutual understanding, the Euro-Turkish rapprochement was in fact progressing more dynamically than anticipated by the Ankara Agreement, so much so that an additional protocol entered into force in 1973 with the aim of establishing the free movement of goods, services and people. This was the culmination of the Ankara process. With the beginning of the 1980s the relations came to a 30 year-impasse as a result of four shocks.

The first shock was the Turkish military coup of 1980. After the coup, the European trade union movement active within the European Parliament started a campaign leading to the suspension of Ankara agreement on January 22, 1982. The European Parliament’s alienation from Turkey was exacerbated with the adoption of the 1982 constitution, sponsored by the military authorities. Until 1987, the EP published 11 resolutions on the new regime established by the Constitution, qualifying it as “oppressive” and “inadequate for guaranteeing fundamental human rights”.

The second shock came with the Turkish application for full membership in 1987 during the Motherland Party (ANAP) government of Turgut Özal. The application was not made on the basis of the Ankara Agreement but on article 237 of the “Rome Treaty” stating that “any European country” could apply for membership. This brought an ambiguity to the well-framed Ankara process. The EEC considered the application as an opportunity to review its Turkish strategy and swerved from its obligations stemming from the Ankara Agreement. The Community mainly underlined the high unemployment rate in Turkey as a pretext to cancel the engagement on free movement of people, expressed the impossibility for Turkish membership as long as the political regime was not reformed and insisted solely on the completion of a customs union in 1995.

The third shock came with fall of the Iron curtain, which ushered in the erosion of Turkey’s geopolitical status within the European order. After the EEC was transformed into the “European Union” in order to institute an enlarged supranational entity that would also include former communist states, the challenges on the Turkey were intensified with a more demanding Europe. “Democratic values” represented by stronger EU institutions were hereafter at least as crucial as economic interests. Although the customs union was completed in 1995, Turkey was totally excluded from the enlargement perspective in the Luxembourg Council of 1997, as its political system and “security ideology” were considered as obstacles to its full membership.

The fourth shock was the armed conflict between the Kurdistan Workers’ Party (PKK) and the Turkish state. Particularly during the 1990s, when the conflict claimed tens of thousands of lives, mostly Kurdish, the nationalist state security philosophy enshrined in the 1982 constitution was put into effect in the sturdiest fashion. The EU was critical of both the PKK and the Turkish authorities, calling for an end to violence and necessary measures for the promotion of minority rights.

With these four shocks, the communication context between the EU and Turkey was enlarged as political issues were also integrated in an initially technical and economic agenda. The Turkish political elite had difficulties in understanding the consequences of this politicization, being extremely confident of the economic developments. The political conditions entered in the governmental agenda only in 1999, after the capture of PKK’s leader Abdullah Öcalan.

IMPLICATIONS: The declaration of a precise EU commitment in Helsinki in 1999 contributed to stabilizing Turkish politics and engendered an unprecedented consensus among major political parties in favor of pro-European reforms. From 2001 until 2002, when the Justice and Development Party (AKP) came to power, three extensive reform packages brought in fundamental changes regarding democratization, including the abolishment of death penalty.

When it came to power, the AKP therefore found a favorable environment to completely eliminate the turbulence provoked by the above-mentioned four shocks. At the beginning of its mandate, the new government advertised effectively the image of “Europeanizing Turkey” both at domestic and European levels. The Turkish public opinion supported the accession process, and even though other political parties were also favorable to change, the EU threw its weight behind the AKP, viewing all other Turkish political actors as the defenders of the old, repressive order. With this endorsement, the AKP enacted reforms aiming to consolidate full civil authority over the military apparatus. In 2004, Prime Minister Recep Tayyip Erdoğan was selected the “European of the Year”, and shortly thereafter the EU decided that Turkey was “sufficiently democratic” to begin the accession negotiations.

Yet, the enlarged communication context prevented further “Europeanization”, especially when the accession negotiations were undertaken in a new open-ended framework, meaning that the timing and modality of Turkish membership were not guaranteed. The anti-Turkish membership political forces, notably President Nicolas Sarkozy of France and Angela Merkel of Germany benefited from the blurry membership perspective and the vulnerability of the relations to be distracted by political debates. New, restricted membership models were invented and the opening of new chapters in the negotiations was blocked using political pretexts. As an additional negative factor, Turkey’s disengagement from its responsibilities towards Cyprus finally brought a complete stall of the negotiations in 2006.

Since, the AKP government does not seem willing to take the risk of engaging in a process with non-guaranteed outcomes. Indeed, it has always been the concrete membership perspective that has triggered the domestic political process in candidate countries. Also, the growing EU reluctance has diminished the Turkish public opinion’s support. According to a recent work of the Turkish Center of Economic and Foreign Policy Studies, the public support to the EU membership process has dropped to 30 percent in 2013. Against this backdrop, the Turkish government cannot be expected to unilaterally insist on “Europeanization”.

However, it is also not clear whether the AKP government is really eager to pursue Europeanization; since 2006 the EU institutions have regularly been pointing to the insufficiency of the government’s performance. The reasons for this poor performance can be various; many critics of the AKP have been charging that the party has had a “hidden agenda”, that it allegedly has exploited the EU process in order to gain international and internal legitimacy as the party of liberal reform. However, it is clear that as long as the negotiation framework remains “open-ended”, no government in Turkey is likely to fully commit to Europeanization. 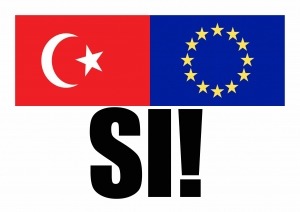 CONCLUSIONS: The EU enlargement towards Turkey has gone astray. Although the negotiations are still officially open, and are due to resume by the end of this year, there is always the risk that negotiations will be stalled again as a result of political preferences of influential EU members. However, they will never come to the point of “full rejection” as long as the Ankara Agreement from 1963 remains in force.

If both sides are really willing to make progress, they will need to establish a new communicational context where it is possible to forecast each other’s attitudes by defining clear objectives and timetables, and repeating mutual commitments. This is especially important for the EU side as the Turkish reform period between 2001 and 2005 demonstrates how much a clear European commitment can mean, bringing consensus in Turkish politics and initiating EU reforms. Otherwise, the endless prolongation of Turkey’s accession process will decrease the integrity of EU enlargement policy and contribute to a degradation of European Union’s international status.

Ozan Serdaroğlu, Ph.D., is a Visiting Fellow at the Institute of Security and Development Policy’s Silk Road Studies Program in Stockholm, Sweden

More in this category: « One Step from the Brink: Turkey's Kurdish Peace Process Edges Closer to Collapse Is Turkey going to reconsider its Sunni sectarian policy in Syria? »
back to top