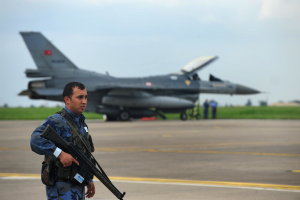 BACKGROUND: During the first half of 2020, Turkey's overt military intervention in support of the Government of National Accord (GNA) reversed the course of Libya's civil war. By empowering the Tripoli-based government to drive opposition forces backed by Egypt, the United Arab Emirates (UAE), France, and Russia from western Libya, Turkey has also gained a strategic advantage over France, the UAE and Egypt in a broader competition for influence in Africa.

On June 15, 2020, Turkish media disclosed that Turkey has been in discussions with the Government of National Accord (GNA) to establish a Turkish naval base in the GNA coastal stronghold of Misrata and a Turkish air force presence at the re-captured al-Watiyah air base, located 27 km from the Tunisian border.  With Turkey's effective demonstration of its expeditionary capabilities in Libya having already increased Ankara's clout in Algiers and Tunis, the prospect of a permanent Turkish military presence in Libya is cementing Turkey's status as a major power in North Africa as well as enhancing Turkey's diplomatic and economic reach in Africa south of the Sahara.

On August 13, 2020, Turkey and Libya signed an economic agreement to resolve outstanding issues arising from Turkish construction projects initiated during the Gaddafi era, estimated at 20 percent of Libya's investment projects that will also clear the way for new Turkish investments and increased trade. In 2019, Turkey became the largest exporter to Libya after China, surpassing the EU and earning Turkey $1.53 billion in revenue.

Yet Libya is just the tip of the iceberg. From 2010 to 2016, Ankara opened 26 embassies in Africa and Turkey's outsized presence in Libya now serves as platform from which Ankara can promote its ongoing effort to expand Turkey's economic and political footprint across Africa.  One month into Turkey's game-changing Libya intervention, Turkey's President Recep Tayyip Erdoğan visited Algeria on January 26, 2020 as part of a  three-country trip to Africa that included Senegal and Gambia, two of Africa 'economic tigers', the former of which hosts one of France’s four military bases in Africa.

In Algiers, Erdoğan announced the goal to raise bilateral trade between Turkey and Algeria to $5 billion and pushed for a free trade agreement. Turkey's 2019 exports to Algeria totaled a paltry $5.1 million, placing Turkey 76th among Algeria's import markets. In contrast, France is the largest exporter to Algeria after China, earning Paris $3.8 billion in revenue in 2019. Despite the low trade figure, Turkey has already made strong inroads through $3.5 billion dollars of investments in Algeria, ranking Turkey as one of the country's top foreign investors. While Ankara has also embarked on a parallel effort in neighboring Tunisia, Turkey's effort in Algeria, which borders the key Sahel nations of Mauritania, Mali, and Niger, has greater importance for Turkey's connectivity with the rest of Africa. Declaring Algeria as "one of our strategic partners in North Africa," during his January 2020 visit Erdoğan explained, "Algeria is one of Turkey’s most important gateways to the Maghreb and Africa.”

Not confined to West and Central Africa, Turkey's Africa outreach efforts also include the greater East Africa region, extending down the Red Sea coast and into the Horn of Africa. These efforts have been a cause of concern for Egypt and its Gulf partners, the UAE, and Saudi Arabia.  Turkey's strategic capabilities in the Red Sea were significantly enhanced in September 2017 when Ankara opened a military facility in Mogadishu, Somalia. Turkey's $50 million, 4 square km Mogadishu base is its largest training facility outside Anatolia and is expected to train 10,000 Somali troops. With Turkey being able to house assets for its own naval, air, and ground forces, the Mogadishu base provides Ankara with a position reasonably close to the Gulf of Aden, the strategic eastern entry into the Red Sea.

In response to Turkey's expanding footprint in Somalia, the UAE started funding Somalia's semi-autonomous breakaway regions of Somaliland and Puntland, investing $440 million in Somaliland's Berbera port and $336 million in Puntland's Bosaso port. The construction of rival maritime installations has transformed the Horn of Africa into a theater of intense competition between the Turkey-Qatar and Egypt-Saudi Arabia-UAE blocs.

In 2018, Turkey was poised to achieve a Red Sea strategic breakthrough with Sudan's agreement to lease its Suakin port to Turkey for 99 years. Turkey had plans to build a dual-use civilian/naval facility in Suakin, located only 261 nautical miles across the Red Sea from Saudi Arabia's Jeddah port, causing grave concern in Riyadh and Abu Dhabi. The prospect a Turkish naval base in Sudan also raised alarm bells in Cairo for fear of Turkey developing a Red Sea naval presence, as well as providing support to Sudan's claims to the Halayib triangle, the disputed border territory now under Egypt's control. After the announcement of Turkey's Suakin acquisition, Egypt sent hundreds of troops to the United Arab Emirates' base in Eritrea. Egypt had already been developing a massive 150,000 acre air, sea, and land military complex on the Red Sea at Bernice, 90 km north of the Halayib triangle. Turkey’s effort to secure Sudan's Suakin port as dual-use facility was ultimately stymied in April 2019 after the ouster of Sudanese strongman President Omar al-Bashir and a collective pledge of $3 billion to Sudan's new government by the UAE and Saudi Arabia.

IMPLICATIONS: France may try to push back against Turkey in North Africa by leveraging its formidable resources south of the Maghreb. France maintains a double ring of hard power around Libya and Algeria – an inner ring of operational facilities in Mauritania, Mali, Burkina Faso, Niger and Chad, supported by an outer ring of permanent bases in Senegal, Cote D'Ivoire, and Gabon.  When unidentified Rafale jets carried out the  July 6, 2020 air strike on the Watiyah air base causing significant damage to newly stationed Turkish air defense assets, speculation was raised that one of France's African facilities, such as its air base in Chad, may have been involved in the operation.

However, Turkey's recent diplomatic progress in Niger has put a chink in the armor of France's Sahel redoubt.  In a significant advance, Turkey and Niger on July 21, 2020 signed several agreements on economic and defense cooperation. Following the Somalia model, among the agreements signed between Ankara and Niamey was a military training cooperation agreement.  The economic agreements build on the breakthrough January 2020 deal between Ankara and Niamey to allow Turkey's General Directorate of Mineral Research and Exploration to conduct exploration and mining operations.  Because France generates three-quarters of its electricity from nuclear power and one-third of the uranium used is mined in Niger by the French company Areva, Turkey's entrance into Niger's mining industry was an early signal of a widening relationship.

Turkey's diplomatic advances in Niger are matched by parallel advances in the Horn of Africa with Ethiopia, which is the ascending powerhouse of the region. As Egypt increasingly threatens Ethiopia over the latter's construction of the Grand Ethiopian Renaissance Dam on the Blue Nile, Ethiopia has looked to the expansion of its relationship with Turkey as counterbalance. In addition to a growing trade relationship between the two countries, Ethiopia is the leading destination for Turkey's Africa investments, receiving  $2.5 billion of Turkey's almost $7 billion of investments across the continent.  The relationship paid off in 2018 when Ethiopia shifted its policy toward Somalia, opting for a new era of cooperation with Turkey's ally.  The situation reportedly has prompted Egypt to engage the breakaway region of Somaliland in discussions over building an Egyptian military base in the autonomous territory.

CONCLUSIONS: France is Egypt's third largest weapons supplier and maintains a naval base in the UAE.  Turkey's advances in Africa will likely prompt Paris to work even more closely coordinated with Cairo and Abu Dhabi in sub-Saharan Africa to thwart the further expansion of Ankara's influence.  All three might also find common cause with Russia toward this end in other parts of the continent, making Libya a preview of a wider African contest in which the European Union has vital interests but remains in an enfeebled position to influence the course of events. Such a development would also present the United States an ongoing strategic dilemma.

As Ankara advances its activities in Africa, the rivalry between Turkey and the Franco-Emirati-Egyptian entente is set to become entrenched as one of the main drivers of African geopolitics.

Prof. Michaël Tanchum teaches international relations of the Middle East and North Africa at the University of Navarra, Spain and is a Senior Fellow at the Austrian Institute for European and Security Studies (AIES). He also holds fellow positions at the Truman Research Institute for the Advancement of Peace, the Hebrew University, Israel, and at the Centre for Strategic Policy Implementation at Başkent University in Ankara, Turkey (Başkent-SAM).  @michaeltanchum

More in this category: « Turkey Seeks to Counter Russia in the Black Sea-Caucasus Region Süleyman Soylu: The Rise of the "Second Man" of the Turkish Regime »
back to top