By Turan Suleymanov and Bahruz Babayev

Turkey’s active, military and diplomatic involvement in the recent Azerbaijan-Armenia border clashes has sent a strong signal to both Armenia and Russia that Turkey will not remain passive and quietly acquiesce to any attempt to destabilize Azerbaijan. At stake is not only Turkey’s standing in Azerbaijan, arguably its closest international partner, but equally its energy safety and its wider, Central Asian political and economic ambitions. The Turkish intervention in defense of Azerbaijan is an unmistakable political warning that multiple actors will be involved in a possible escalation by Armenia of its conflict with Azerbaijan. In this sense, it serves as a guarantee for long-term stability and security in the south Caucasus. Reasonably, Armenia will have been permanently discouraged from seeking any further confrontation with Azerbaijan. 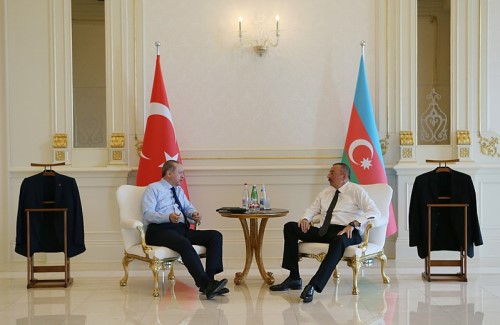 BACKGROUND: Turkey and Azerbaijan have enjoyed a strong, friendly relationship that has continued to develop since Azerbaijan’s independence in 1991. On August 16, 2010, the two countries signed an agreement on “Strategic Partnership and Mutual Assistance,” which provided solid grounds for mutual military support. This strategic partnership is now proving its strength. Turkey was the first country that reacted to the cross-border military engagement that took place between Armenia and Azerbaijan on July 12-17, 2020. On July 13, Turkey’s Ministry of Foreign Affairs explicitly stated that it would defend the territorial integrity of Azerbaijan using every possible means.

Also, Turkey made it clear that it remains committed to protecting its vital strategic and economic interests in the South Caucasus. Turkish Minister of Defense Hulusi Akar announced that Turkey would provide all needed support in countering what he described as Armenia’s provocations along the Azerbaijan-Armenia border. Turkey deployed F-16 jets in Azerbaijan and on July 29, a joint military exercise of Turkish and Azerbaijani forces kicked off.

Turkey's quick and determined reaction attests to the importance of its strategic and economic interests in the South Caucasus. Chief among Ankara’s priorities are the realization of energy and transport projects.  Besides, Turkey has been reaping the benefits of the bilateral, business and cultural relationship with Azerbaijan. The State Oil Company of Azerbaijan (SOCAR) has to date invested an excess of US$ 20 billion in Turkey, including in the Star refinery in Izmir. Since 2019, Azerbaijan has provided nearly a quarter of the total volume of natural gas supplies to Turkey.  And Azerbaijan has been a trusted partner in terms of providing Turkey with the cheapest gas between 2007 and 2020.

In addition, Turkey and Azerbaijan share a diverse range of political and economic interests that include the development of the Southern Gas Corridor (SGC) that is aimed at ensuring Europe’s energy security by bringing natural gas from the Caspian Sea to Europe. The SGC also opens the possibility of exporting Turkmen gas to Europe, which would further strengthen the hand of Turkey as an energy hub. As of May 2019, Azerbaijan’s investment in the SGC had reached US$ 9.7 billion. Turkish Petroleum is the second-largest shareholder in the Azerbaijani gas field Shah Deniz. The corridor will on its completion deliver 16 billion cubic meters of gas per year. In addition, Turkey has been enjoying transit fees from the Baku-Tbilisi-Ceyhan (BTC) oil pipeline, that carries Caspian oil providing approximately 40 percent of Israel's and 37 percent of Italy’s oil needs. Furthermore, the Trans Anatolian Natural Gas Pipeline Project (TANAP) which will be delivering Azerbaijani gas to Europe also stands to increase Turkey’s soft power in the Eastern Europe and Balkans.

Furthermore, Turkey and Azerbaijan have been actively promoting the establishment of new East-West transport corridors. The Middle Corridor, which stretches from the South Caucasus across Azerbaijan, provides Turkey access to the Turkic nations of Central Asia. In addition, this ensures that Turkey does not have to rely exclusively on Russia and Iran with regard to strategic transport corridors. Turkey’s own version of the Middle Corridor envisions an extension of the railway lines from Turkey to Central Asia via the Baku-Tbilisi Kars (BTK) railway route. BTK had a capacity to carry one million passengers and 6.5 million tons of freight per year when it became operational in 2017. The Middle Corridor, which features prominently within China’s Belt and Road Initiative (BRI), also provides economic benefits for Turkey both in terms of being a recipient of Chinese cargo and as a transit country for Chinese goods.

Most importantly, the south Caucasus and the Caspian Sea is Turkey’s gateway to Central Asia; Turkey’s ambition – which dates back to the early 1990s and the breakup of the Soviet Union – to develop closer economic and political ties with Central Asia’s Turkic countries (Kazakhstan, Turkmenistan, Uzbekistan and Kyrgyzstan) requires the establishment and maintenance of direct and reliable transport routes; in this regard, the BTK railway remains a uniquely attractive alternative for Turkey.

IMPLICATIONS: Azerbaijan’s importance as a trusted energy partner for Turkey has increased as Turkey’s relations with Russia, and also Iran have become increasingly complicated by political differences over Libya and Syria. At the same time, Turkey's active policy in support of Azerbaijan in the conflict between Armenia and Azerbaijan inevitably puts it at odds with Russia, which militarily backs Armenia. As Turkey seeks to project power in the eastern Mediterranean and works to ensure that it will have a say over the future of Syria, it needs to carefully navigate the relationship with Russia. This is becoming increasingly challenging, with Turkey and Russia being on opposite sides in Libya and with their goals and ambitions diverging and even conflicting in Syria; an escalation of the Armenian-Azerbaijani conflict, which inevitably raises the specter of some form of Turkish intervention, would in this light be a further, unwelcome complication of the Russian-Turkish relation. Yet abandoning the south Caucasus is not an option for Ankara.

The fact that Turkey has chosen to demonstrate that it is determined if need be to take military action to protect Azerbaijan against Armenia – even if that by extension means confronting Russia – to ensure that its energy interests and the regional transport infrastructure on which it relies are not jeopardized, is also a reminder that Turkish-Russian geopolitical interests don’t align as much – or at all – as some in Turkey would have it. The Eurasian faction in the Turkish state, which is especially strong in the military, argues that Turkey ought to move away from its traditionally close – but nowadays increasingly conflicted – relationship with the United States, and instead develop a closer relation with Russia – as well as with Iran and China. Many active and retired senior Turkish military officers argue that Turkey has more in common in geopolitical terms with Russia than it has with its Atlantic partner. Yet the strategic realities of south Caucasus – and beyond that the related Turkish interests in Central Asia – clearly illustrate the limits of this, pro-Russian Eurasian thinking.

CONCLUSIONS:  Turkey’s active involvement in the recent Azerbaijan-Armenia border clashes has sent a strong signal to both Armenia and Russia that Turkey will not remain passive and quietly acquiesce to any attempt to destabilize Azerbaijan. At stake is not only Turkey’s standing in Azerbaijan, arguably its closest international partner, but equally its energy safety and its wider, Central Asian political and economic ambitions, indeed its international standing.

The Turkish intervention in defense of Azerbaijan is an unmistakable political warning that multiple actors will be involved in a possible escalation by Armenia of its conflict with Azerbaijan. In this sense, it serves as a guarantee for long-term stability and security in the south Caucasus. Reasonably, Armenia will have been permanently discouraged from seeking any further confrontation with Azerbaijan.

Turan Suleymanov and Bahruz Babayev are PhD candidates, analysts and researchers at the Azerbaijan State University of Economics (UNEC).

More in this category: « From Pro-Americanism to Anti-Imperialism: The Historic Turn of the Turkish Nationalist Right Amid Turkey’s Deteriorating Relations with the U.S. the Future of İncirlik airbase is Unclear »
back to top