Turkey, Ukraine and Russia: The Illusion of Neutrality

Turkey insists on maintaining close relations both with Russia and Ukraine, but this balancing act has become near-impossible to maintain after the Russian invasion of Ukraine. A week into the invasion, Kyiv received a new batch of drones from Turkey that have already proved their effectiveness against the Russian forces. Even though Turkey will seek to maintain a balance as far as possible, its strong military ties with Ukraine speak of its geopolitical ambition to contain Russia. Turkey’s relation with Russia is transactional, while its commitment to the defense of Ukraine is an expression of Turkey’s strategic vision and its adherence to the geopolitical goals of the Western alliance. That will ultimately prove decisive. 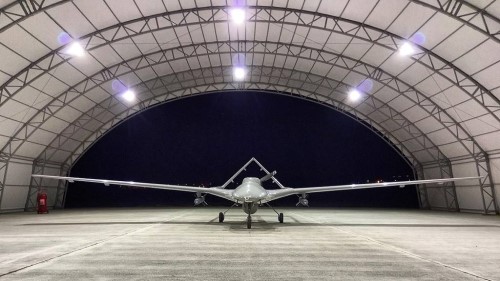 BACKGROUND: On March 1, Turkish foreign minister Mevlüt Çavuşoğlu informed Turkish media that Russia had alerted Turkey that four of its warships would cross the Turkish straits – the Dardanelles and the Bosporus – on February 27-28, three of which were not registered to bases in the Black Sea. “We told Russia not to send these ships and Russia said that the vessels would not cross the straits,” Çavuşoğlu said. The 1936 Montreux Convention gives Turkey the right during time of war to limit the passage through its straits of warships that are not registered to bases in the Black Sea. On February 24 Kyiv asked Ankara to close the straits to Russian warships, a request to which Turkey did not immediately respond. But on February 27, foreign minister Çavuşoğlu called the situation in Ukraine a war, allowing Turkey to invoke the articles of the Montreux convention that limit the passage of the warships of other nations. On February 28, Turkish president Recep Tayyip Erdoğan said that Ankara would implement the Montreux convention to prevent an escalation of the war in Ukraine.

When on February 23 Russian president Vladimir Putin signed a decree recognizing the ‘’independence’’ of the two separatist Ukrainian regions, the so-called Luhansk and Donetsk People’s Republics, and ordered Russian troops to enter there as a ‘’peace-keeping forces,’ Erdoğan immediately reacted and told his Russian counterpart during a phone call that Turkey will not recognize any violations of Ukraine’s territorial integrity and said that his country remains dedicated to de-escalation efforts.

Upon Russia’s invasion on Ukraine on February 24 President Erdoğan convened a security summit where he condemned the attack, calling it “unacceptable.” He also reiterated Turkey’s support for Ukraine’s territorial integrity and sovereignty. In his statement on February 28, Erdoğan also stressed that Turkey’s national interests mean that Turkey cannot abandon its ties with Russia or Ukraine. Turkey still insists on maintaining close relations both with Russia and Ukraine. Russia accounted for 56 percent of Turkey’s grain imports in 2021, and Russia is Turkey’s main gas supplier, accounting for 52 percent of its gas needs. Moreover, the conflict risks hampering Turkey’s recovering tourism industry as tourists from Russia and Ukraine constitute around a quarter of foreign vacationers in Turkey. Before the start of the war, analysts predicted that it will have a strong negative effect on the already stumbling Turkish economy as it will put more price pressure on commodities which will cause even higher inflation rate. On the first day of Russian invasion Turkish lira had lost more than 5 percent of its value against the U.S. dollar.

IMPLICATIONS: Since the onset of Russian aggression on Ukraine in 2014 Turkey has been balancing between the need to support Kyiv and reluctance to alienate Moscow and Ankara has strived to position itself as a mediator between Ukraine and Russia. Yet Turkey has not been sitting on the fence when it comes to the occupation of the Crimea and the war in Donbass. On the contrary, Turkey has repeatedly expressed its support for Ukraine’s territorial integrity, condemned the Russian annexation of Crimea (with which Turkey has long historical ties) and joined Kyiv in denouncing human rights abuses against Crimean Tatars. Importantly, Turkey has developed a strong military partnership with Ukraine, and it has been a strong proponent for bringing Ukraine, and Georgia, into NATO. Turkey’s relation with Russia is transactional, while its commitment to the defense of Ukraine is ultimately an expression of Turkey’s strategic vision and of its adherence to the Western alliance. Turkey’s strong military ties with Ukraine clearly speak of its geopolitical ambition to contain Russia.

Yet on the other hand Turkey refused to join the Western sanctions against Russia after it annexed Crimea, and it has sought to avoid giving the impression that its burgeoning defense cooperation with Ukraine is aimed at Russia,  reassuring Moscow that its military partnership with Ukraine is not “aimed at a third country”. Russia, though, was hardly reassured. And even though Turkey strongly supports Ukraine and its bid to join NATO, Ankara did not take part in the Western deterrence efforts against Russia.

Ukraine’s President Volodymyr Zelensky referred to Recep Tayyip Erdoğan as “my dear friend” after Turkey denied passage to Russian vessels. The friendship between Ukraine and Turkey was on full display during President Erdoğan’s visit to Ukraine on February 3, 2022.  The Turkish president’s visit to Kyiv was planned months ago to sign a highly-anticipated free trade deal and important new defense agreements, but it also turned into an occasion for Erdoğan to offer – unsuccessfully -- his services for preventing a war. Ukraine welcomed the Turkish offer to host a trilateral meeting to diffuse tensions between Ukraine and Russia, but neither Russia nor the United States accepted Turkey as a diplomatic intermediary.

The major highlight of the Erdoğan’s visit to Ukraine was the conclusion of the long-awaited free trade agreement (FTA) between Ukraine and Turkey which had been under negotiations for the last 12 years. Trade partnership between Ukraine and Turkey has been on the rise in the past several years and the FTA is expected to boost it even more and elevate bilateral trade volume beyond USD 10 billion in the next few years. Even though the FTA will give Kyiv unlimited access to the Turkish defense technology, its overall beneficial impact will be limited after Russia’s invasion of Ukraine. Nonetheless, the military-technological Turkish support can still make a difference.

During the February visit, Ukrainian and Turkish presidents also signed an important drone deal which anticipated the kick-start joint production of the Turkey’s increasingly popular Bayraktar TB2 unmanned combat aerial vehicle. Coproduction was planned to be set up in Ukraine along with the training center, and the drones were to have Ukrainian-manufactured engines. Turkey has been particularly interested in cooperation with Ukraine in aerospace technologies, especially in Ukrainian-manufactured engines to power Turkish armed drones. In turn, Ukraine has not only acquired Turkish drone technology but in 2020 Kyiv purchased 2 Turkish ADA-class corvettes which are armed with anti-submarine missiles and have high seas patrol capabilities. There were also plans for joint defense projects such as coproduction of Ukraine's AN-178 aircraft. Even though the ongoing war will inevitably put a halt to these ambitious cooperation projects, Ukraine is bound to look to Turkey for arms procurements. Indeed, a week into the invasion, Kyiv had received a batch of Bayraktar TB2 UCAVs from Turkey that have already proved their effectiveness against the Russian forces.

In 2021, Ukraine used the Bayraktar TB2 UCAVs in combat to strike the positions of Russian proxy forces in the Donbass. This drew Russia’s ire and President Vladimir Putin made a call to the Turkish leader to protest the use of combat drones for ‘’provocative activity’’ which he said undermined the Minsk accords. The use of Bayraktar TB2 UCAVs in Donbass did indeed give Ukraine a strategic advantage against the separatists that are armed by Russia since the combat drones have proved to be effective in destroying Russian-made weaponry in Libya, Syria and most recently in Nagorno-Karabakh. As a response to the Kremlin, Turkey repeatedly denied that Turkish arms sales to Ukraine are targeted at Russia while firmly maintaining that Moscow’s anger will not stop any joint defense projects with and weapon transfer to Ukraine.

CONCLUSIONS: The war in Ukraine will have serious economic implications for Turkey. It will harm its economic relations and defense cooperation with the protagonists of the war. Turkey has had good reasons for maneuvering between Ukraine and Russia to avoid an escalation of the conflict and to try to benefit from both partnerships at once. Turkey insists on maintaining close relations both with Russia and Ukraine, but this balancing act has now become near-impossible to maintain.

Turkey might face pressure not only from Moscow to cease arm transfers to Ukraine, but also from its NATO partners to join additional sanctions against Russia or to loosen up its bilateral relations with it.  Yet even though Turkey will seek to maintain a balance as far as possible, its strong military ties with Ukraine speak of its geopolitical ambition to contain Russia. Turkey’s relationship with Russia is transactional, while its commitment to the defense of Ukraine is an expression of Turkey’s strategic vision and of its adherence to the geopolitical goals of the Western alliance. That will ultimately prove decisive.

More in this category: « The Gezi Park Verdicts and the Allure of Delusion Fading Façades: Abdülhamit Gül, the Rule of Law and the Power Struggles Within the Erdoğan Regime »
back to top