Rejecting Democracy: What Turkey has in common with Russia and Iran

The Turkish, Russian and Iranian regimes share strikingly similar traits. They have emerged to form a group of radically nationalist, self-proclaimed “virile” alternatives to liberal democracy. All three “anti-democracies” project themselves as hegemonic powers, but they remain deeply frustrated former empires and their future is uncertain. Unfortunately, the passivity that the Erdoğan regime has succeeded in instilling in Turkish society, like the Putin regime has done in Russia, may prove to be its lasting legacy, ensuring the survival of authoritarian rule. 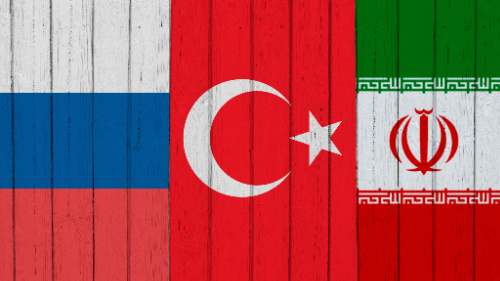 BACKGROUND: On July 19, 2022, Turkish president Recep Tayyip Erdoğan, Russian president Vladimir Putin and Iranian president Ebrahim Raissi met in Tehran. The summit was part of the so-called Astana process for a settlement of the conflict in Syria. But the interests of the three countries overlap in other respects as well. On August 5, 2022, president Erdoğan travelled to Sochi, Russia, for a bilateral meeting with president Putin at his summer residence that lasted for four hours. An agreement was reached to expand cooperation in the economic and energy sectors, raising eyebrows among Western commentators who struggle to make sense of the partnership between two countries that are simultaneously engaged in a geopolitical rivalry, from northern Africa to the Caucasus. While the rapprochement of Erdoğan, Putin and Raissi may be dictated by realpolitik there is also a fundamental ideological convergence between the Russian, Turkish and Iranian leaders.

In spite of a shared imperial past and a more or less similar process of westernization during the 19th Century, Russia and Turkey as well as Iran followed contrasted trajectories throughout much of the 20th Century. Yet, their regimes ultimately converged toward a similar model in the 2010s and 2020s. Their specific chronologies were marked by a series of internal and regional crisis, but also by the end of the post-Cold War illusions that the victory of liberal democracy was irreversible.

All three leaders, Recep Tayyip Erdoğan, Vladimir Putin and Ali Khamenei, the Supreme leader of Iran, claim that they are engaged in what they ultimately see as a cultural battle with the West. They profess to seek the restoration of a national purity that supposedly existed before the Westernization of the 19th Century and the “betrayal” by westernizing national elites. Moreover, for Erdoğan, as for Putin and Khamenei, the nation is charged by history with the task of bringing justice and harmony to the world under its paternalistic and exclusive leadership. This, in turn, legitimizes imperialism and war: Russia’s invasion of Ukraine bespeaks a clear disregard for the Westphalian order. So does Iran’s establishment of influence in Iraq, Lebanon, and elsewhere in the Middle East. While Turkey does not reject the existence of Syria as a nation, its invasions of northern Syria are nonetheless designed to establish a permanent Turkish territorial control. (Link here to Turkey Analyst 220829)

While the Turkish regime, like the Russian and Iranian regimes, has formally preserved the institutions of democracy, and maintains democratic appearances by allowing opposition parties, institutional checks and balances run against the notion that the Leader embodies the nation; checking his power would hence, in this view, be tantamount to imposing a limit on the will of the nation.

Institutional differences and local colors and shapes notwithstanding, the three regimes represent a combination of “cartel regimes” and hegemonic power blocs. One has to be extremely prudent concerning comparisons between the current Iranian, Russian and Turkish regimes and the totalitarianisms of the 1920s and 1930s. Yet, they are nonetheless based on a sort of Führerprinzip, the leader holding alone the ultimate power. The “will” of the Leader is the ultimate will that no one can contest within the regime. However, the system also constitutes a cartel, bringing together a wide range of actors either institutionally or de facto.  At the heart of this cartel, one finds the leader, his inner circle and in some cases his family, which is always feared as the direct emanation of the state power. In the second place is the state’s new “nobility”, i.e., the military commanders, the chiefs of the paramilitary or militia forces, internal security and intelligence agencies. The third place is occupied by the high kleptocracy.

The last component of the “cartel” is an “elite of opportunity”, whose members joined the regime not at its beginning, but once it had consolidated. The Erdoğan, Velayat and Putin regimes all reached their “maturity” around the beginning of the 2010s; they were in need of bureaucrats and semi-intellectual apologists, but they also had the capacity to distribute financial and symbolic dividends to their high-ranking officials, “pens” and clients. These newcomers have in turn played a decisive role in the radicalization of the discourses and praxis of the Turkish regime, as well as of those of Russia and Iran.

IMPLICATIONS: The cartel structure is consolidated by a hegemonic bloc that brings together different classes and strata with fundamentally contradictory interests and expectations. Until recently the Erdoğan regime was successful in integrating not only wide sections of the middle classes, but more importantly, also the most disadvantaged categories through charity. Their inclusion of these strata enabled the regime to produce what has proven to be a long-lasting mechanism of obedience, even in the face of growing inequalities. So far, the disparities in income and wealth have not generated any widespread popular discontent; one reason is that inequalities have been legitimized by the regime in religious terms as being “natural.”

Like the anti-democracies of the first half of the 20th century, those of today use the weakness, loss of attraction and in some cases also cowardice of democracies as a resource of their durability. Arguably, the Western democracies’ passivity after the use of chemical weapons by the Syrian regime in 2013 and after the ethnic cleansing that the Turkish army and its Syrian mercenaries carried out in some Kurdish regions in Syria emboldened both Erdoğan and Putin, just like the abandonment in 1936 of the Spanish republic by the democracies encouraged Nazism's aggressive foreign policy towards Europe.

Still, one of the main differences between the anti-democracies Turkey, Russia and Iran today and the totalitarian regimes of the 1920s-1930s is that the latter attempted to transform society in its entirety into an “organic body”, whose “smallest cells” were to be organized, enlisted, and indoctrinated by a Party-State. In contrast, the current Turkish, Russian and Iranian regimes have neither the possibility nor – at least for the time being – the intention to impose such a total control over society. Voluntarily or not, they have ceded spaces of potential resistance.

Also, the class structures and class policies of the anti-democracies of the 1920s and 1930s, and those of today fundamentally differ. The former preserved the class structures they inherited from the past, but at the same time promoted a new elite. They also aimed at the transformation of their respective nations in their entirety into “aristocratic entities” and therefore to a certain degree sought to “equalize” the social and economic conditions of their subjects.  The militarization of their economy both allowed and made inevitable such a step. For Erdoğan, though, class differences and poverty are inseparable from the human condition imposed by God’s will. Poverty, accordingly, is supposed to be managed by charity and social services, but certainly not overcome by structural, socio-political measures. In this sense, Erdoğan is a traditional conservative.

The third difference is linked to the issue of war and violence. The totalitarian regimes of the 1920s and 1930s all had para-state features and no matter the status of the national militaries, relied on a variety of paramilitary structures, which mirrored the militarization of the societies as a whole. In the cases of the modern anti-democracies, there is no equivalent of such a societal militarization, but instead an increasing process of para-militarization of the state. In the Turkish case the “Special Forces” of the Police and of the Gendarmerie have gained prominence, although not anywhere near the same level as the Iranian Revolutionary Guards or the Russian Wagner Company and the Corps of Cossacks. Even though the Turkish regime, like the Iranian regime, does make instrumental use of the cult of martyrs and of sacrificial death for the nation, the quasi-totality of the Turkish population has no direct link to the violence exerted in its name.

CONCLUSIONS: The Turkish, Russia and Iranian regimes have carried out genuine right-wing revolutions that have put an end to liberal experiments that preceded the turns to the right. Putin has liquidated the liberal heritage of his predecessors Mikhail Gorbachev and Boris Yeltsin. Erdoğan has turned his back on the liberal policies and the anti-nationalism that he himself espoused during his first years in power. Khamenei was never reputed to have liberal inclinations, but he had nonetheless consented to the liberal reforms that Muhammed Khatami tried to implement as president between 1997 and 2005, a legacy that was liquidated under the subsequent presidency of Mahmoud Ahmadinejad.

The Turkish, Russian and Iranian regimes share traits with the right-wing dictatorships of Spain and Portugal under Francisco Franco and Antonio Salazar. The regimes of Franco and Salazar were strongly attached to Catholicism, both as a religion, and as an institution and as a disciplinary/coercive orthopraxy, in contrast to Fascism and Nazism that were viscerally anti-Christian. Franco and Salazar successfully promoted the notion that the faith is a constitutive part of the nation, fixing its essence as well as its historical mission.

It is impossible to predict if the same identification with religion will ensure the continued survival of the Turkish, Russian and Iranian regimes, but it certainly remains a major asset, not only for the latter, but also for the two other anti-democracies.

Yet if the opinion surveys are to be believed, the Erdoğan era is drawing to a close. But even if Erdoğan were to lose the presidential election due to be held in June 2023, his successor will face the daunting – but nonetheless urgent – task of dismantling the repressive state edifice that has been put in place. This in turn, will require an unprecedented societal mobilization in favor of liberty and democracy in Turkey.

Recent events show that Khamenei has not succeeded in pacifying Iranian society and that also Putin could be facing growing societal discontent. In the case of Erdoğan, though, the passivity that he has succeeded in instilling in Turkish society may prove to be its lasting legacy, ensuring the survival of authoritarian rule.

More in this category: « Turkey and the Ukraine War: Ankara Charts its Own Course Demirtaş, the HDP and the Kurdish political movement’s struggle for relevance »
back to top