Turkey’s Alternative Gas Suppliers: Who to bet on?

Turkey’s decision to shoot down a Russian jet in the Syrian border led to a crisis between the two countries. Although Russia and Turkey always had divergent political agendas, they maintained a good relationship. In the last decade, thanks to the personal relationship of the leaders, Russia and Turkey created a strong economic partnership, especially in the energy field, and kept it separately from the political sphere. But this time is different: the deterioration in political relations will have a strong impact on energy cooperation. Russia slammed economic sanctions on Turkey and big investment projects are at risk. Given its dependency on Russian natural gas, Turkey is concerned about its energy security, making the quest for alternative suppliers and sources highly relevant. 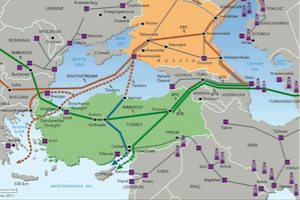 BACKGROUND: Natural gas is the most important component of the Turkish energy sector. Being the dominant fuel in the energy mix, it is mainly used in power generation, and in residential and industrial sectors. Turkey imports almost 99 percent of its gas needs from third countries. Russia is by far Turkey’s largest gas supplier, and provided almost 60 percent of total gas imports in 2014. Moreover, Turkish gas demand is forecast to almost double by 2030. The growing demand will make Turkey ever more dependent on imports. Since gas from Azerbaijan is not sufficient, gas from Iran is expensive, and Turkey’s LNG capacity is limited, Russia will remain Turkey’s main supplier for the foreseeable future.

Since the late 2000s, aware of the risk involved in depending on a single supplier, Turkey adopted a strategy of diversification. In order to do so, Ankara is cooperating with the neighbouring countries for the construction of the Southern gas corridor. This European initiative aims to connect non-Russian gas reserves of the Caspian Basin and the Middle East to the energy-hungry European markets through Turkish territory. So far, an agreement has been reached only with Azerbaijan for the construction of the Trans-Anatolian Pipeline (TANAP).

Yet Turkey also kept strengthening its energy cooperation with Russia, and in 2015 the two countries committed to the construction the Turkish Stream pipeline, – a replacement for the aborted South Stream project through the eastern Balkan. That project aimed to secure Russia’s long-term policy objective of eliminating Ukraine’s role as a transit corridor, and to transfer gas to Europe instead through Turkey. While that made the project controversial, Ankara had its own reasons: it was expecting a discount in gas prices and planning to secure future and direct gas flows. However, the recent tension in bilateral relations, followed by the decision to cancel the Turkish Stream project, put Ankara in a difficult position regarding its energy security. This could be a wake-up call for Turkey to remind itself the importance and urgency of a diversification policy. In fact, immediately after the deterioration of relations with Russia, Turkey began taking steps in that direction.

IMPLICATIONS: Turkey holds a key geographical position: it is a natural energy bridge between the rich gas reserves to its east and south and energy-dependent Europe. Ankara could both enhance Europe’s energy security and diversify its own supplies. Turkey’s decision to speed up the construction of TANAP was therefore a natural move. However, Azerbaijani gas supplies are not sufficient to compete with Russian gas, and can satisfy only a limited portion of Turkey’s demand. Additional suppliers need to be added to the corridor. Indeed, there are many candidates to fulfill this objective, all with their particular assets and liabilities.

Turkmenistan has the fourth largest proven gas reserves in the world, and Ashgabat is in search for additional markets for its gas exports. But the transportation of Turkmenistan’s gas to Turkey requires the now two decades-old project of a Trans-Caspian Pipeline, which would connect it to the South Caucasus Pipeline and to TANAP. Russian and Iranian opposition to the project has helped prevent it from being realized. Combined with the complexity of Turkmenistan’s gas export policy, the development of TCP remains uncertain. It should be noted that the EU Vice President of the EU Commission in May 2015 in Ashgabat stated an ambition to begin to receive Turkmen gas by 2019.

Iran has the second largest gas reserves in the world. Now that the international sanctions on Iran are expected to be lifted, it has ambitious plans, such as adding its own gas to the international network and finally reach European markets. Presently, Iran is Turkey’s second largest supplier, providing 20 percent of the country’s gas needs. Since the infrastructure exists, connecting it to TANAP will not be a complicated task. However, Turkish-Iranian energy relations have been dominated by disputes. Iranian gas is expensive and there has been several gas cuts from Iran due to alleged technical problems and weather conditions. In addition, the gas pipeline suffers from terrorist attacks which cause further problems for the transportation, and Turkey and Iran are on opposite sides of the conflicts in Iraq and Syria. Therefore, relying on Iranian gas for diversification is not Ankara’s ideal solution.

Estimates suggest that there are 3.45 trillion cubic feet of natural gas offshore of Cyprus. At the moment, Cyprus does not produce any gas and it plans to export the gas at earliest in 2019. Cypriot gas could be connected to TANAP by simply building a pipeline from the gas fields to Turkey. The total estimated cost for a pipeline is around $ 2.5 billion, making the option the most cost-efficient compared to building an LNG terminal or a pipeline to Greece. However, this option faces serious political obstacles, and Turkey has openly rejected the right of the Greek Cypriot government to drill for gas. As long as the Cyprus conflict remains unsettled, it is not realistic to expect Cypriot gas in Turkey’s energy mix.

Israel is estimated to have 950 bcm of offshore gas reserves. As a growing natural gas market, Israel's gas reserves will mostly satisfy domestic demand, shifting Israel from being an energy dependent to an energy independent country, and excess gas (potentially half of production) could be exported to markets in need of natural gas and boost the Israeli economy.

Experts argue that the most promising Israeli export market is Turkey. It is big enough to absorb the supply, making construction of a $2 billion pipeline a cost-efficient option both technically and economically. However, again, this prospect faces political obstacles: Israeli-Turkish diplomatic relations have been at the freezing point following the Mavi Marmara Flotilla incident in 2010, which pushed Israel to postpone any export project to Turkey and redirect its export intentions towards Egypt. However, recently the Italian energy company ENI announced the discovery of a supergiant gas field in Egypt's territorial waters. According to the details, it has potential reserves of 30 tcm of natural gas, and it could be one of the largest gas field in the world. The discovery is certain to change the energy scenario in the area. As the Israeli energy minister highlighted in September 2015, Israel will probably have to reconsider its export policy. In fact, the Turkish option is now more convenient for Israel, and Ankara could benefit from it.

Today, Turkey and the Kurdistan Regional Government of Iraq (KRG) are engaged in both trade and energy issues and the KRG has ambitious plans to export its gas to Turkey. An agreement was concluded in November 2013 to export 4 bcmy in the initial phase, with an option to increase the amount to 20 bcmy. BOTAŞ has already begun the construction of a pipeline with the capacity of 20 bcmy and expects gas to flow by 2017. The gas will come from fields that the Genel Energy (an Anglo-Turkish firm which is the largest independent oil producer and holder of reserves in the KRG) is operating. According to Genel Energy's chairman, Northern Iraq could provide up to 30 bcm of gas per year to Turkey in the next decade. However, there are obstacles to this scenario as well: Turkish-KRG deals without the agreement of the Iraqi federal government could worsen Turkey’s relations with Baghdad, while terrorist attacks on the pipelines threaten the security of the gas flows in the region.

A final option for Ankara’s diversification of supply is to increase its LNG imports. Today, only 11 percent of Turkish gas demand is satisfied through LNG and Turkey’s largest LNG sources are Algeria (4.1 bcm), Nigeria (1.5 bcm) and Qatar (1.1 bcm). However, the LNG storage capacity is limited, at around 3 bcm, and regasification capacity does not exceed 14 bcm, amounts insufficient to satisfy large amount of imports.

CONCLUSIONS: Turkey has many options to diversify its suppliers. Caspian gas provides a considerable potential that could help Turkey balance the dominance of Russian gas in its markets. However, Ankara is not presently in a position to settle the problems of the Caspian Basin – while the feasibility for Central Asian gas producers of exporting to Turkey will grow remarkably when the TANAP project is completed. Therefore, in the meantime, it makes sense for Ankara to focus on its other potential suppliers: Israel, Cyprus and the KRG. With the latter, the process has already started and within two years Kurdish gas is scheduled to flow to the Turkish market, but the amounts will be not sufficient to satisfy diversification concerns in a growing energy market. Meanwhile, Israel and Cyprus gas could serve Ankara’s objectives. Not only are these cost-efficient solutions, the Mediterranean gas suppliers lack alternative feasible directions to sell their gas, while their domestic demand is low. In an ideal world, mutual interests in natural gas production would provide a strong rationale for Turkey to settle the Cyprus issue, and to normalize its relations with Israel and Egypt, thereby ending Turkey’s political isolation in the Eastern Mediterranean. Whether such an optimistic scenario could materialize remains to be seen.

Ipek Velioğlu is a research intern at the Institute of Security and Development Policy’s Silk Road Studies Program in Stockholm, Sweden.

More in this category: « Turkey does not want to be left out of the Trans-Atlantic community Is Turkey at War with the “Islamic State”? »
back to top