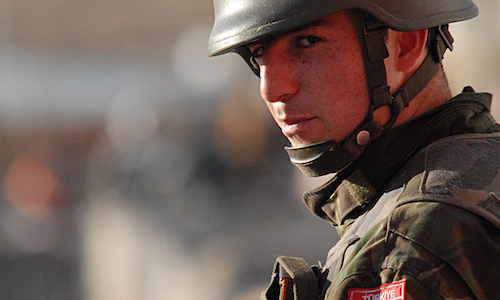 BACKGROUND: For the Turkish armed forces (TSK), the July 15 coup attempt was a humiliation from which it will take a long time to recover. Not only did the attempted coup demonstrate a fateful lack of internal control on part of the military leadership, but also – if the official story is to be believed – that the military organisation had been colonised by a religious fraternity determined to seize state power.  The negative effect of such an event on the reputation and popular standing of the Turkish military is also likely to be high.

The Turkish Armed Forces used to be the most trusted institution in Turkey, but that was before rebel soldiers fired at civilians resisting the putsch and national institutions were attacked by helicopters and fighter jets. The psychological impact on Turkish society of this conduct can hardly be exaggerated.  Almost 4,500 officers have been dismissed from the TSK since the coup attempt. Among these are almost half of the generals and admirals serving in the armed forces prior to July 15 this year.  The dismissals are likely to have a negative impact on the combat effectiveness and battle preparedness of the Turkish armed forces, at least in the short term. In particular, it will be difficult to replace the air force pilots, army helicopter pilots and commanders in the Special Forces who have been discharged. This type of personnel has central roles in ongoing operations against the Kurdistan Workers’ Party (PKK), and against the so called Islamic State and Kurdish rebel groups in Syria. The impact on other branches and units is more uncertain.

Most of the dismissed generals and admirals have been replaced through promotions from lower ranks, and there seem to be no real shortages at present. On the other hand, fast-tracking officers in this way inevitably raise questions of experience and competence – in particular because the previous rounds of dismissals and fast-track promotions, following the Ergenekon and ‘Sledgehammer’ trials, are just a few years in the past.

IMPLICATIONS: Judging from a number of decrees, passed under emergency law, there will be a range of important changes in the command structure and functioning of the Turkish military. First, the Chief of Staff will be appointed directly by the president. Direct government control will also be strengthened by levelling the number of cabinet ministers and four-star generals in the Supreme Military Council (YAŞ), the body that decides on senior promotions and other overarching issues in the armed forces. The chain of command at the top will also be changed. The Chief of Staff and the General Staff will be attached to the Presidency instead of the Prime Minister’s office. The commanders of the Land-, Air- and Sea-forces, on the other hand, will be subjected to the Ministry of National Defense. Moreover, the president and the prime minister will be able to give orders directly to these commanders without going through the Chief of Staff.

Ultimately, this could reduce the Chief of Staff to a coordinator of military affairs rather than the top commander of the armed forces. In his new and enhanced role, the Minister of National Defense will be able to choose ministry staff rather than making do with what the TSK has provided. Traditionally, the defense ministry has been staffed by military officers on secondment from the General Staff, directed by three-star generals.

In addition, the military education system will undergo major changes. Military high schools have already been closed, and within two years the existing military academies will be fused into a new National University for Defense under the Ministry for National Defense.

The more long-term consequences for the TSK of such a comprehensive restructuring are not easy to assess at this early stage. Some of these reforms were already in the cards, for example the subjection of the Gendarmerie and the Coast Guard to the Ministry of Internal Affairs. Industrial facilities, shipyards and hospitals are also strictly speaking outside the core activities of a modern military, and even if these units have constituted an integral part of the TSK’s activities, it is not inconceivable that a gradual transfer to civilian management would have taken place even without the coup attempt. Neither does it come as a surprise that President Recep Tayyip Erdoğan wants to subject the Chief of Staff and the General Staff to the president rather than the prime minister’s office, given his determination to create a strong presidency. Even before the coup-attempt, President Erdoğan hinted that he wanted to take a more active role as commander-in-chief.

Other measures seem more radical and potentially disruptive for the Turkish Armed Forces. Political appointments go against a long and honoured tradition of meritocracy in the military, and the direct appointment of the Chief of Staff by the president is likely to stir up controversy in the officers’ corps. The same goes for an increased presence of cabinet ministers in the Supreme Military Council.

The new chain of command at the top is also a novelty in the Turkish military system, and breaks with a time-honoured practice of having one supreme military commander for all the armed forces. Moreover, the establishment of a new national university for defense will discontinue the Turkish military academies – institutions with traditions that go back well over a century. There is also a lack of expertise on military and defense questions in the civilian bureaucracy, and this knowledge-gap is not so easily filled – even if the Ministry of Defense is now given a formally stronger position vis-à-vis the armed forces. It will take years to educate sufficient civilian expertise in this field, and in the meantime the government will have few alternatives but to rely on the knowledge of military officers.

The Turkish government will face similar challenges in the establishment of a National Defense University to replace the current military academies. It seems likely that the civilian government’s need for military know-how could give a prominent role to military officers that were dismissed as a result of the Ergenekon and ‘Sledgehammer’ trials, and for this reason are not tainted by any links to the recent coup attempt. Many of these officers are secularists, but at the same time ‘Eurasianist’ in outlook: sceptical of Turkey’s reliance on the West for its security needs and supportive of a closer relationship between Turkey and Russia. For this reason, the turnover of military personnel could also mean more challenging relations between Turkey and its NATO allies.

CONCLUSIONS: It is not difficult to understand the rationale behind increased civilian government control of the armed forces after the 15th July coup attempt. Neither are the ongoing changes in Turkey without parallel in other NATO countries. Germany has had a similar system since the 1950s with strong civilian control and oversight of the armed forces, and deliberate institutional mechanisms to prevent the Chief of Staff from becoming too strong in his relationship with the civilian government.

By means of the current changes, the Turkish government no doubt aims to transform the TSK into a better-managed and more efficient defense force that is capable of handling Turkey’s current and future security challenges, but without becoming a threat to the civilian government. However, in a less optimistic scenario, the Turkish Armed Forces could also become a more politicized and dysfunctional organisation, with greater internal rivalry between the branches and an even more restive officers’ corps. Such a development would impact negatively on the long-term efficiency and battle-preparedness of the armed forces, and could provide fertile ground for renewed political factionalism among the officers.

As for civil-military relations, it seems that the process of civilianization that started in the early 2000s will now reach a provisional final stage. Institutional reforms after 2002 displaced the military from the government decision-making process, and ended its role as a veto power in Turkey. Furthermore, the Ergenekon and ‘Sledgehammer’ cases served to pacify the military as a significant factor in Turkish politics. The July 15 coup attempt, finally, has paved the way for subjecting the armed forces to civilian control and oversight.

What seems clear, though, is that the government of the Justice and Development Party (AKP) now aims to increase civilian political control and oversight with the armed forces, and not civilian democratic control as we usually understand this concept. Unlike the German system for example, where the Bundestag has a strong role in exercising civilian control and oversight, a greater role for the Turkish Grand National Assembly in military and security affairs does not seem to be part of the government’s restructuring efforts. Military and security matters in Turkey are still likely to be handled in the National Security Council behind closed doors. In addition, democratic control and oversight would require increased transparency, and a real public debate on defense and security issues. Without such measures, it is difficult to see how the Turkish Armed Forces can become truly accountable to the Turkish citizenry and their elected representatives.

It has been pointed out that achieving meaningful oversight of the armed forces by the legislature in Turkey would require a fundamental shift in outlook by parliamentarians, and ultimately the electorate. Perhaps strengthening civilian government control of the TSK can lead to such a “fundamental shift” sometime in the future, but Turkey does not appear to be at this point yet.

Lars Haugom is a researcher with more than fifteen years of experience in teaching, analysis and directing analytical work on the Middle East for the Norwegian Armed Forces. He is currently guest researcher at the Norwegian Institute for Defence Studies where he works on a Ph.D. project on civilian-military relations in Turkey.

More in this category: « The Kurdish Issue and Turkey’s Narrowing Tunnel Erdoğan’s Dilemma: Preserving the Nationalist Alliance or Making Peace »
back to top