The resounding victory of the opposition in Istanbul has rekindled the democratic hopes of an urban middle class that had come close to losing all hope about the future of Turkey. Yet the democratic vision of Ekrem İmamoğlu, Istanbul’s new mayor, who many see as the next leader of their country, is limited by his embrace of a conservative political tradition that is very much responsible for the persistence of authoritarianism in Turkey. Although the Istanbul election has shown that it takes a conservative to beat a conservative, Turkey is going to need something else to build a lasting democracy. 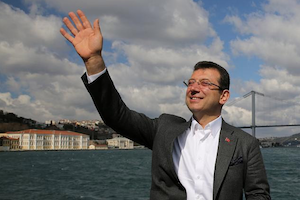 BACKGROUND:  The resounding victory of Ekrem İmamoğlu in the June 23 rerun of the mayoral election in Istanbul has breathed fresh hope into Turkish politics. İmamoğlu, who is a member of the officially social democratic Republican People’s Party (CHP), the main opposition party, and who was the joint candidate of the CHP and the nationalist Good Party, carried the election with 55 percent of the votes against the former Prime Minister Binali Yıldırım, a close confidant of President Recep Tayyip Erdoğan, who is also the leader of the ruling Islamic conservative Justice and Development Party (AKP).

İmamoğlu received 800,000 more votes than his rival, thus vastly increasing his support compared to the first election that was held on March 31 – whose result was subsequently cancelled by the state electoral board – in which his margin of victory had been only thirteen thousand votes.

Ekrem İmamoğlu’s landslide victory in Turkey’s most important metropolis is the greatest electoral setback that the AKP, in power since 2002, has suffered. Members of the opposition CHP are now in charge of all three major cities, Istanbul, Ankara and Izmir, but it is the Istanbul landslide that has by far the greatest political implications.

First, the magnitude and symbolism of the Istanbul win has shredded the regime’s image of invincibility. Not only did İmamoğlu win convincingly, but he did so after the regime had denied him his victory in the first place. By ordering a rerun of the Istanbul election, only to lose it much more resoundingly than in the first case, President Erdoğan and his ally Devlet Bahçeli, the leader of the far right Nationalist Action Party (MHP) have inadvertently succeeded in demonstrating a powerlessness to control the political course of the country that no one, it is fair to say, had expected that they would demonstrate. On the contrary, when the regime ordered a rerun of the election, opposition voices feared that the victory of the AKP candidate was going to be ensured with the assistance of shady provocations and acts of violence that have stained Turkish politics during the last half-century. Many feared a repetition of 2015, when the AKP first lost a general election and then won the rerun, a win that was attributed to the acts of violence that had taken place in the interval.

The powerlessness of the regime today is all the more spectacular as the rerun was said to be dictated by the “existential” interests of the Turkish state. These were said to be threatened (See May 16, 2019 Turkey Analyst) by the fact that the Kurdish political movement had decided the outcome of the March 31 election in Istanbul. The intervention of Selahattin Demirtaş, the imprisoned former co-chair of the pro-Kurdish Peoples’ Democratic Party (HDP) in favor of İmamoğlu was indeed decisive, and Demirtaş reiterated his support in the run-up to the June 23 election.

Ironically, Erdoğan and Bahçeli in response solicited the services of Abdullah Öcalan, the imprisoned leader of the Kurdistan Workers’ Party (PKK). A message from Öcalan, in which he instructed the Kurdish voters not to cast their votes for İmamoğlu, was published by the state-owned Anatolia news agency. Öcalan’s instruction was apparently ignored, as Kurdish voters seem to have rallied to İmamoğlu in even greater numbers on June 23. The unprecedented move of offering the convicted leader of the PKK a say in Turkish electoral politics may also have cost the regime votes, as İmamoğlu carried districts of Istanbul that are known to be nationalist strongholds, and where the AKP and MHP used to dominate.

The fact that the regime chose not to obstruct the opposition victory in Istanbul signals that raison d’état – or what passes as it – is ultimately trumped by economic reasoning; an exacerbation of political tensions would have jeopardized vital economic interests. President Erdoğan pretended to be incensed when TÜSIAD, the Association of Turkish Businesspeople and Industrialists, expressed cautious criticism when the March 31 Istanbul election result was cancelled. However, Erdoğan was in fact never anxious to have a rerun – it was Bahçeli who pushed for it. The statement of the TÜSIAD and the open support of Ömer Koç, the country’s leading industrial baron, for İmamoğlu may have helped Erdoğan rein in Bahçeli and the more militant faction of the state apparatus for which he speaks.

IMPLICATIONS: Since he became the leader of the CHP almost a decade ago, Kemal Kılıçdaroğlu has consistently worked to transcend the secularist-conservative divide in order to appeal to a broader constituency, beyond the secular, urban middle class that is the CHP’s main base. In the same vein, Kılıçdaroğlu has endeavored to federate the diverse strands of the opposition to Erdoğan under a conservative umbrella. He has done so assuming that only a conservative can beat a conservative in a country where the majority is right-wing. In the 2014 presidential election, Kılıçdaroğlu’s pick was Ekmeleddin İhsanoğlu, an Islamic conservative who had served as the secretary general of the Organization of Islamic Cooperation (OIC). In the presidential election last year, Kılıçdaroğlu would have rallied the CHP behind Abdullah Gül, if the former AKP politician and president had not been dissuaded from challenging Erdoğan.

Kılıçdaroğlu’s choices and determination to steer the CHP to the right were never uncontroversial, and especially his preference for Gül drew heavy criticism from secularists and from the left within his party. But in İmamoğlu, Kılıçdaroğlu finally found the person he had been looking for, someone who is able to appeal both to religious conservatives and to the urban, modern middle class.

Although he has been a member of the officially social democrat CHP since 2009, İmamoğlu is not a social democrat but a conservative in the tradition of the center-right that has dominated Turkish politics since the 1950s. During the election campaign, he paid homage to Süleyman Demirel and Turgut Özal, two former conservative leaders, but also, and much more problematically, to Alparslan Türkeş, the founding leader of the far right MHP. The CHP leader had selected İmamoğlu precisely because of his conservative credentials, and although the June 23 result resoundingly vindicated him, he is also facing the question whether İmamoğlu’s conservatism could become a problem in the future.

Kılıçdaroğlu answer to the query is an unequivocal no; he maintains that İmamoğlu’s conservatism has no bearing on the running the municipality of Istanbul.  Yet events since March 31 have catapulted İmamoğlu into the role of a national political figure and he himself clearly entertains the idea of succeeding Erdoğan. In this light, his conservatism can pose a problem, and this in two ways: in terms of holding together the coalition that won Istanbul and with regard to furthering the cause of democracy in Turkey.

İmamoğlu’s catchy campaign slogan – “Everything is going to be wonderful” – touched the voters in Istanbul with its heady optimism, but these words merely paper over real differences – between Turkish nationalism and Kurdish aspirations, between conservatism and socialism – that are not prone to be reconciled under normal circumstances.  Liberals, social democrats and socialists overlooked İmamoğlu’s tributes to past right-wing leaders and his religious rhetoric and voted for him because he was the alternative to Erdoğan’s candidate, much like French socialists voted for the center-right candidate Emmanuel Macron because he was the alternative to the far right. But the center-left’s infatuation with İmamoğlu may prove short-lived if he remains too identified with conservatism.

The democratic track-record of Turkish conservatism is discouraging. The leaders that İmamoğlu honored during the election campaign were anything but democratic role models. Süleyman Demirel cooperated with the far right of Alparslan Türkeş, allowing its militants to kill leftist students, intellectuals and politicians with impunity in the 1970s. Turgut Özal served the military junta in the 1980s and subsequently worked to prevent the politicians who had been banned from politics by the generals from standing for election again after democratic rule had been restored.

CONCLUSIONS: The resounding victory of the opposition in Istanbul has rekindled the democratic hopes of an urban middle class that had come close to losing all hope about the future of Turkey. It offers an encouraging glimpse into a future without the depressing rule of Erdoğan and AKP-MHP. Yet the democratic vision of Istanbul’s new mayor – who many see as the next leader of Turkey – is limited. His embrace of a conservative political tradition that carries a heavy responsibility for the permanence of authoritarianism in Turkey casts a shadow over him.

Resurrecting the conservatism of past illiberal leaders like Süleyman Demirel and Turgut Özal – not to speak of paying tribute to the far right leader Alparslan Türkeş – can by definition not provide the answer to Turkey’s democratic travails.

Although the Istanbul election has shown that it takes a conservative to beat a conservative, Turkey is going to need more than that to build a lasting democracy.

Halil Karaveli is a Senior Fellow with the Central Asia-Caucasus Institute & Silk Road Studies Program Joint Center and Editor of the Turkey Analyst. He is the author of Why Turkey is Authoritarian: From Atatürk to Erdoğan (Pluto Press)

More in this category: « Syrian Safe Zone Moves U.S.-Turkey Relationship Beyond Kobani A Dangerous Policy of Turkish Containment in the Eastern Mediterranean »
back to top