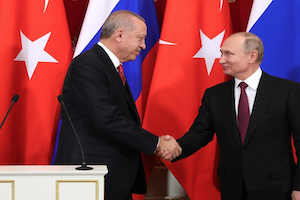 BACKGROUND: Starting in the early 2000s, Turkey and the Russian Federation accomplished historic levels of reconciliation. Moscow and Ankara deepened their bilateral relations in an unprecedented manner. From energy to defense, from Black Sea security to putting common thorns aside on Chechnya and the Kurdistan Workers’ Party (PKK), political and economic relations prospered. This mutually beneficial trend was abruptly interrupted when the Arab uprisings in 2011 spread to Moscow’s regional ally Syria. Bilateral relations quickly deteriorated as Ankara and Moscow found each other on opposing sides in the Syrian quagmire. Nevertheless, the parties managed to compartmentalize their relations and treaded carefully not to wreck the overall relationship. This delicate period came to an end when the Turkish Air Force shot down a Russian Su-24 in Turkish airspace close to the Syrian border in 2015. The crisis quickly escalated, and a total falling out was only averted by a Turkish apology just days before the 2016 coup attempt against President Recep Tayyip Erdoğan. Moscow’s purported supportive role both before and after the failed coup, coupled by the Turkish perception that the U.S. was sympathetic to, if not implicated in, the coup led to a dramatic reversal in bilateral relations.

In tandem with Turkey’s apology, Ankara’s Syria policy evolved drastically as direct Russian military intervention in the conflict led to a remarkable turnaround in the Syrian war theatre. While Russian influence in Syria and in the region increased exponentially, Turkey’s role increasingly became defensive and tended to narrow down on the Kurdish component in Syria.

The post-2015 phase in Russo-Turkish relations was recently crowned by the deliberately visible delivery of the S-400 air defense system despite strong U.S. and NATO opposition. In the context of the rapid deepening of Turkish-Russian relations and the adoption of an increasingly Eurasian discourse in Turkish domestic politics, the S-400 issue has become a symbol of Turkey’s alienation and detachment from the West. The delivery of the S-400s and the subsequent decision of the United States to exclude Turkey from the F-35 program have precipitated volumes of commentary about Turkey’s strategic orientation.  Yet the reality is much more complicated and calls for a nuanced analysis.

The deepening of Turkish-Russian relations is taking place against the background of considerable turmoil in the Western world. Brexit, the Trump presidency and the overall rise of right-wing authoritarianism have changed the image of the West. Seen from Ankara, both Europe and the U.S. – their economic might, dominance in international institutions and their military capacity via NATO notwithstanding -- increasingly look weaker, divided and ideologically adrift. Not surprisingly, the Turkish leadership detects a distinct level of western ineffectiveness. As was demonstrated by the 2015 Syrian migration crisis and afterwards, there is a real disconnect between Ankara and major western capitals on the psychological level as well. This disconnect has become even more pronounced in the aftermath of the 2016 coup attempt.

IMPLICATIONS: Ankara’s pivot toward Moscow is ultimately rooted in domestic politics. In 2015, President Erdoğan made a sudden political turn and forged an alliance with ultranationalists, notably abandoning the Kurdish peace process that the Turkish government had initiated in 2013. The securitization of Turkish domestic politics is expressed in the ever more authoritarian practices of the state. The disrespect for the freedom of expression and the rule of law have not only alienated a considerable part of Turkish society but also drawn strong criticism from major western capitals and institutions.

The primary benefit of deepening the relationship with Russia and entertaining a Eurasian narrative lies in the legitimization of authoritarian rule. Erdoğan’s ultranationalist allies have long been advocating a divorce from the U.S. and the West. Such a distancing from the West benefits Erdoğan as it allows him to curtail fundamental freedoms and rids him from living up to the responsibilities of a normal democracy. Meanwhile, Erdoğan has been able to lead his traditionally conservative base in an increasingly nationalist if not ultranationalist direction. The result, a profound synthesis between religion and Turkish nationalism, provides the regime with a strong ideological base.

In an ideal world Erdoğan would probably prefer a full divorce from the West, but he is constrained by the realities on the ground and he understands that he needs to take steps incrementally. Although the Turkish president has little regard for western values or democratic standards, he nevertheless appreciates the need for a continued economic partnership with Europe and for NATO membership. As contradictory as it sounds, the Turkish leadership’s desire to remain in NATO is in no small part conditioned by its perceived need to protect itself from other NATO members, especially the United States.

Turkey’s pro-government and ultranationalist media outlets successfully promoted the acquisition of the S-400s as a supposedly strategic move to establish Turkey’s independence from the West. A free debate on the S-400s never took place. Yet while the government exerts an overwhelming dominance over traditional media, it was the pro-Russian and ultranationalist social media that proved crucial in manufacturing consent. The extent of the success of this endeavor was abundantly demonstrated when the main opposition leader, the chairman of the Republican People’s Party (CHP), also came out in favor of the S-400 purchase.

Ironically, Turkey and Russia do not see eye to eye on a host of foreign policy issues of mutual concern. Russo-Turkish disagreements on Bosnia, Cyprus, Crimea, the Armenia-Azerbaijan conflict, the PKK, Turkish-Greek relations, Turkey’s EU ambitions and Black Sea security remain as deep as ever. Moscow and Ankara even diverge within the Astana Process on Syria. Russia continues to host a PKK office in Moscow, opposes more Turkish influence in the South Caucasus, and is willing to accommodate the PKK-affiliated Democratic Union Party (PYD) in Syria. Beyond energy, tourism and defense there are limits to further deepening the partnership. However, Moscow greatly enjoys sowing discord within the NATO alliance. It is also anxious to create and cultivate new defense dependencies, and Turkey represents a lucrative market. This strategy has worked well. Turkey has become the black sheep within NATO.

It is very likely that the deepening of relations between Ankara and Moscow will continue as long as the current power coalition between conservative/Islamists and ultranationalists hold the upper hand in Ankara. The Turkish leadership and its current internal allies care little about democracy, western values or a true partnership with the West. Ankara wants a purely transactional relationship with both the EU and the United States. It knows the EU track is dead anyway and it is tired of depending on U.S. congressional approval for its defense needs. What Ankara wants from the West is a sustainable trade relationship, continued direct investments and diplomatic support for Turkish policies.

Yet from energy to trade, from defense to tourism, the Turkish-Russian relationship is an asymmetrical affair. While Ankara is anxious to define this new relationship in nationalist terms, as ‘Turkey gaining more independence from the West’ the reality is that Turkey will become more dependent on Russia than it already is in areas such as energy and possibly also defense.

CONCLUSIONS: Despite the Islamist-ultranationalist narrative that depicts Turkey’s distancing from the West as an expression of Turkish independence, Ankara in fact risks forfeiting its independence as it moves toward the Russian orbit. Although this is not yet an all-encompassing transformation, there are nonetheless signs of an incremental shift in that direction.

Yet ultimately, the endeavor to reorient Turkey toward Russia and Eurasia faces the challenge that Turkey’s democratic tradition poses. For a majority of the Turkish population, the fundamental respect for election results remains indispensable for political legitimacy. This was recently demonstrated in no uncertain terms at the rerun of the Istanbul mayoral election. The citizens of Turkey show no inclination to cede their right to determine their leaders via elections à la Eurasia. Also, they continue to see the West, identified with democracy, rule of law, freedom of expression, education and technological innovation, as a model.

At a fundamental level, the driver of the Turkish-Russian relationship is the perennial trauma of the two countries’ states elites of being excluded from the West. Both Turkey and Russia tried hard to become part of or collaborate on an equal footing with the West. And yet both failed. The sense of failure and the humiliation of exclusion breed the urge to rewrite the rules of the international order and to ensure Turkey and Russia their rightful, prominent places in it. It is this feature of the relationship that ensures that the constraints that would otherwise prevent a further deepening of the partnership are overcome. Vladimir Putin and Recep Tayyip Erdoğan share a common resentment over western dominance. And they are both determined to bring it to an end.

Suat Kınıklıoğlu is a Senior Fellow at the Institute for Security and Development Policy in Stockholm and a former Member of the Turkish Parliament. Follow @kinikli88_ENG and/or @kinikli88