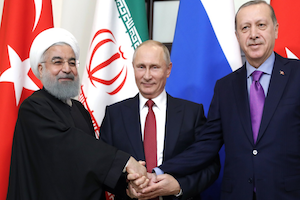 BACKGROUND: On October 9, Turkey launched a military intrusion into northeastern Syria, into the territory that was defined by President Recep Tayyip Erdoğan as a would-be “safe zone” under Turkish control, approximately 480 km wide and 32 km deep. In fact, the operation was limited to a 120 km frontline, stretching towards east from the town of Tal Abyad to the town of Ras al-Ayn (Serêkaniye in Kurdish).

The territory into which the Turkish military force and its Syrian proxies moved, are inhabited mainly by Arabs. The intervention, which was dubbed “Operation Peace Spring,” drew on Turkey’s Syrian proxies, primarily Salafi/Jihadi thugs that make up the so-called Syrian National Army (SNA). The goal of the operation was to crush the Kurdish autonomy in Rojava and to establish a Turkish-controlled zone where some of the over three million Syrian refugees in Turkey could be settled. Turkey achieved the first of the goals, while the latter is not likely to be attained.

The decision of U.S. President Donald Trump, which he communicated to his Turkish counterpart in a telephone conversation on October 6, to withdraw the American troops in the area paved the way for the Turkish intrusion. The abandonment of the Kurds by the United States, shocking as it may be, is nonetheless not unprecedented. Washington has a long record of “betrayal” of Kurdish national objectives. In 1975, the United States encouraged the Shah of Iran to come to terms with Iraq, to withdraw his support to the Kurdish rebellion in northern Iraq that was led by Molla Mustafa Barzani and to seal off the Iranian-Iraqi border. The Kurdish rebellion then collapsed under the onslaught of the Iraqi army.

In the aftermath of the first Gulf War 1991, U.S. President George H.W. Bush instigated the Kurds to rise against the Iraqi leader Saddam Hussein. But when Saddam Hussein brutally suppressed the Kurdish revolt, forcing around one million Kurds to take refuge in Turkey and Iran, the American forces in Iraq remained passive bystanders.

In 2017, Washington withheld its support for the independence bid of its Kurdish ally in Iraq led by Massoud Barzani. Without American support, under Turkish and Iranian joint pressure, and faced with the assault of pro-Iranian Shiite forces, the Kurds lost the would-be jewel in the crown of an independent Kurdish entity in Iraq, the city of Kirkuk, together with other, disputed territories that they had controlled.

In 2018, although it was not the directly responsible party when the Kurdish enclave of Afrin was occupied by Turkey and its Syrian proxies with the connivance of Russia, the U.S. chose to look the other way and did not express any criticism of the Turkish move.

The most recent American “betrayal” of the Kurds offered Russia the opportunity to fill the vacuum that the sudden American withdrawal from northeastern Syria created. The new power dynamic in northern Syria was enshrined in the Memorandum of Understanding that was signed by President Vladimir Putin and his Turkish colleague in Sochi on October 22.

While preserving Turkish control over almost 3,600 square kilometers of Syrian territory mainly inhabited by Arabs, the Russo-Turkish agreement stipulated that Syrian military control, reinforced with Russian forces, was going to be reestablished to the west of Tal Abyad and to the east of Ras al-Ayn. The Russian-Turkish accord also stipulated the withdrawal of the Kurdish People’s Protection Units (YPG) from the Turkish-designated safe zone to the east of the Euphrates River, and that the Russian and Turkish military would jointly patrol a 10 kilometer deep territory of Syria along the Turkish border in the east and west of the Turkish-controlled pocket.

Less than a week after the Russo-Turkish accord, Abu Bakr al-Baghdadi, the leader of the so-called Islamic State (IS), was killed in an American Special forces operation in Idlib in northwestern Syria that is effectively controlled by Turkey. The operation took place five kilometers from the Turkish frontier. In another operation on the same day in Jarablus, another Turkish-controlled part of northern Syria, IS spokesman Abu Muhajir was killed. Intelligence support provided by Syrian Kurds was critical in the latter operation.

The death of Abu Bakr al-Baghdadi may help justify President Trump’s decision to withdraw from the conflict zones of the Middle East as the decision was premised on the assumption that the IS has been defeated, making the American military presence unnecessary.

An unintended consequence of the American operations against the IS leaders in Turkish-controlled areas of Syria is that they shed an embarrassing light on the implications of Turkey’s overlordship in these areas.

IMPLICATIONS: The Turkish state saw the Kurdish autonomous entity in Rojava, which was established in 2012, following the withdrawal of the Syrian troops from the region, as an “existential” threat, believing that it was bound to have an infectious effect on Turkey’s Kurds. But the operation was also precipitated by more “mundane” domestic political reasons, namely President Erdoğan’s need to secure his political survival.

The humiliating defeat in the Istanbul municipal elections in June 2019 demonstrated that Erdoğan is losing support. Former leading figures of the ruling Justice and Development Party (AKP) have left the party and are about to start new, conservative parties, threatening to further erode support for the AKP and its leader. The looming economic crisis may also have pushed Erdoğan to engage in a military adventure.

It was hardly unexpected that an embattled and weakened Erdoğan would resort to acting according to the nationalist playbook in order to re-galvanize popular support. Attacking the Syrian Kurds promised to effectively neutralize the growing opposition and rally broad segments of Turkish society around his leadership. Erdoğan can thereby hope that he has dispelled the threats to his survival for the foreseeable future. But the short-term domestic gains of the intrusion into Rojava are overshadowed by the geopolitical implications of the intervention. The “Operation Peace Spring” has placed Turkey firmer in the Russian orbit. As Suat Kınıklıoğlu noted in the September 23, 2019 Turkey Analyst, “Despite the Islamist-ultranationalist narrative that delicately depicts Turkey’s distancing from the West as Turkey proving its independent credentials Ankara is moving more toward the Russian orbit.”

The Sochi agreement between Putin and Erdoğan represents yet another stage in Turkey’s ongoing drift into the orbit of Russia. Both the wording and the spirit of the Sochi document illustrated that it is not a deal between two equals. Instead, while the Sochi agreement formalizes Russia’s role as the power broker in Syria, Turkey had to consent to having its maximalist ambitions in northeastern Syria curbed and contained by Russia. Effectively sealing the position of Vladimir Putin as the main actor in the Syrian theater, it left no doubt that Recep Tayyip Erdoğan is his auxiliary.

Russia’s main objective in Syria remains to empower the Damascus regime and enable it to extend its rule to the entirety of the Syrian territory. The underlined notions of “territorial integrity” and “political union” of Syria in the Sochi document indicate what policy Russia will continue to pursue. That in turn suggests that the military gains of Turkey in Syria will be temporary; in any case, Turkey will henceforth depend on Russia to maintain a military presence in Syria whose Arab nationalist regime, cared for and nurtured by Russia, aspires to have full control over its territory.

Turkey’s increased dependence on Russia, along with its alienation from the West, can also be expected to have domestic political repercussions, notably bolstering autocratic rule. Indeed, the fortunes of the Erdoğan regime in the aftermath of the Turkish military offensive against the Syrian Kurds largely depends on how relations with Russia will unfold. The absence of a Turkish exit strategy in Syria leaves Ankara exposed to Moscow’s whims.

CONCLUSIONS: Even though Russia has become the chief power broker in Syria, it nonetheless has a meager economic base to sustain a global great power role in the long run. Its economy is strained by the effects of American sanctions. Russia would be unable to bail out Turkey when, as expected, the economic crisis hits the country with full force. The newly enshrined Russo-Turkish partnership in Syria may also prove short-lived since Moscow and Ankara have different, indeed fundamentally irreconcilable political priorities. It is unlikely that Turkey, dependent as it is on the acquiescence of Russia and with an ailing economy, will be able to establish a permanent military presence on Syrian territory.

And the question is if the Turkish autocracy, which had hoped that the invasion of Rojava would strengthen it and help prolong its existence, will survive the effects of the new dynamic that it has unleashed in Syria.

Cengiz Çandar is Distinguished Visiting Scholar at the Institute for Turkish Studies, University of Stockholm

Image Source via Wikimedia accessed on 11.5.19