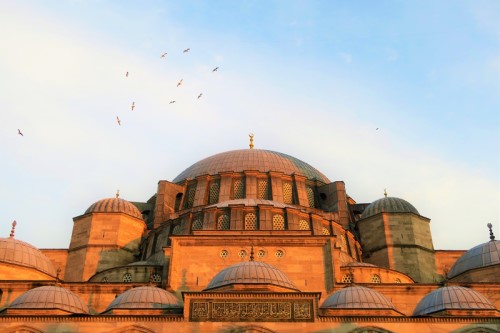 BACKGROUND:  The November 10, 2020 ceasefire agreement created a corridor through Armenia connecting the Azerbaijani exclave of Nakhichevan to the rest of Azerbaijan – providing Turkey, which shares a border with Nakhichevan, with direct connectivity with Azerbaijan and access across the Caspian to all of Turkic Central Asia.  China has been wary of Turkey and apprehensive of its ability to spearhead a movement of Pan-Turkic solidarity that would include the Turkic Uighur minority of China’s Xinjiang province. Turkey is home to the Turkic Council (Cooperation Council of Turkic-Speaking States, Türk Keneşi) and a highly active Uighur expatriate community. As mayor of Istanbul in 1995, now Turkish President Recep Tayyip Erdoğan built a memorial monument to Isa Yusuf Alptekin, leader of the short-lived East Turkestan Republic, defying Chinese protests. As Prime Minister, Erdoğan harshly condemned China's suppression of the July 2009 'riots' in Xinjiang's capital Urumqi and publicly declared China's actions to be "a kind of genocide."

As China’s gateway to Central Asia, Xinjiang is a critical launching point for Beijing's effort to create its Silk Road Economic Belt, an overland transit corridor for China-to-Europe trade (the "Belt" of China's massive Belt and Road Initiative, or BRI). Beijing seeks to secure the integration of the vast Xinjiang province within China and to project Chinese commercial hegemony westward across Central Asia. Turkic Uighurs, formerly a majority in Xinjiang, also known as East Turkestan, now constitute only about 45 percent of Xinjiang's population due to the heavy migration of ethnic Han Chinese as part of Beijing's Sinification program. To eradicate Uighur opposition to Beijing's agenda, upwards of one million Uighurs have been held in detention camps to undergo 'reeducation programs' to erase the Turkic Uighur Muslim identity of the population.

Nonetheless, Turkey shifted its earlier position and managed to assuage Beijing's concerns that it might pose a challenge to its agenda in Xinjiang and its larger BRI strategy in Central Asia.  Aside from a momentary diplomatic flare-up provoked by the prison death of the revered Uighur poet and traditional music performer Abdurehim Heyit, a popular figure in Turkey who bridged Uighur and Turkish Cultures,  Ankara has refrained from any sustained criticism of China over its Uighur policy.

In 2014, China completed the construction of an Ankara-to-Istanbul, high-speed rail link.  The high-speed link was constructed in anticipation of the completion of the Baku-Tblisi-Kars (BTK) railway connecting Azerbaijan to Turkey via Georgia to provide the final link in a China-to-Europe overland transport route, via Kazakhstan, that entirely bypasses Russian territory.  Utilizing container transshipment from Kazakhstan’s main Caspian port Aktau to the specially-constructed port of Baku at Alat, the 826 km BTK rail line breaks Moscow’s stranglehold over China's Eurasian commercial transport by carrying Chinese goods through Azerbaijan for further transport across Georgia and Turkey to European markets. This Trans-Caspian Corridor is expected to transport 75,000-100,000 containers per year.

In 2015, President Erdoğan traveled to Beijing to meet with his Chinese counter-part to further solidify Sino-Turkish cooperation. In China, Turkey's president pledged his support for China's territorial integrity. In May 2016, Ankara demonstrated its increasing willingness to accommodate Beijing when, contrary to its usual practices concerning Uighur refugees, Turkey arrested 98 Uighurs en route overseas with forged passports.  In the wake of the failed July 2016 coup attempt during which the U.S. and Turkey's other Western allies refrained from providing robust support for President Erdoğan and his government, Turkey drew even closer to Beijing. On October 30, 2017 the BTK line was inaugurated, the same month that Beijing adopted its "Sinification of All Religions and Beliefs" program targeting the Uighurs.

Previously cautious about inviting Turkey to play a larger role in the BRI, Beijing became more amenable to utilizing Turkey's key geographical position as a land bridge between Asia and Europe. China's $3.6 billion loan package in 2018 seemed to indicate that Ankara's multi-year accommodation of China's policies in Xinjiang had paid off: Beijing relaxed the limits it had imposed on Sino-Turkish cooperation. Beijing's confidence in Ankara seemed to be well-placed.  In late 2018, Erdoğan's government rejected a parliamentary motion brought by the right-wing opposition İyi (Good) party to investigate human rights violation allegedly perpetrated by China against the Uighurs.

In 2019, China extended its currency swap agreement with Turkey, providing an additional $1 billion cash transfer to Ankara. By the end of 2019, the number of Chinese containers transported across the Caspian Sea via the Trans-Caspian Corridor totaled 5,369 TEU, representing a 111% increase over the previous year.  On December 19, 2020, the first freight train carrying cargo from Turkey to China via the Trans-Caspian Corridor completed its historic trip.

IMPLICATIONS: China's acquiescence to Turkey playing a larger role as a transit state in its BRI commercial transport network was predicated upon two inherent constraints inhibiting Turkey from projecting its influence in Central Asia via Azerbaijan: the threat of a Russian backlash if Turkey intervened heavily in Azerbaijan, and second, the lack of Turkey's direct connectivity with Azerbaijan and its Caspian Sea access to Central Asia. Both of these constraints evaporated with the 2020 Nagorno-Karabakh war.

Moscow has acceded to the presence of Turkish military personnel on Azerbaijani soil and the creation of a commercial transportation corridor across Armenia connecting the Nakhichevan Autonomous Republic and the western regions of Azerbaijan. For the first time since the Soviet army's conquest of Azerbaijan one hundred years ago, Turkey has direct connectivity with Azerbaijan and, via the Caspian Sea, to all of Turkic Central Asia. Azerbaijan's President Ilham Aliyev hailed the  corridor as a "historic achievement" and government-aligned media in Turkey acclaimed the opening of a strategic Turkish corridor through Central Asia to the shores of the Pacific.

The Turkic Council, headquartered in Istanbul, is poised to be an important instrument through which Turkey could reorient Eurasian connectivity.  Established in 2009 with the signing of its founding charter in Nakhichevan, the Turkic Council's full members now are Turkey, Azerbaijan, Kazakhstan, Kyrgyzstan, and Uzbekistan. Turkmenistan, while not an official member, participates in several of the council's activities.  These six nations collectively comprise approximately 150 million people and have total GDP of about $1.5 trillion. The trade volume among them is approximately $16 billion with room for growth. On May 17, 2019, the members of Turkic Council created the Turkic Chamber of Commerce and Industry (TCCI) as a subsidiary organization, to facilitate the unfettered flow of trade and economic cooperation.

Turkey has been engaged in a long term project to upgrade its domestic rail system, having committed total of $45 billion to the program through 2023. The BTK railway's initial capacity 6.5 million tons of freight and 1 million passengers per year is slated to increase to 17 million tons of freight and 3 million passengers with the line's future capacity expansion.  A new all Turkic rail corridor via Nakhchivan providing a second trans-Caspian route would increase commercial flows and provide Turkey greater leverage over Eurasian connectivity.

In April 2019, two container ships, Turkestan and Beket Ata, began service on the Azerbaijan-Kazakhstan route. Azerbaijan maintains commercial connectivity with Turkmenistan, thanks in no small part to Turkey's mediating role in facilitating a rapprochement between Baku and Ashgabat that enhanced economic and security cooperation between the two countries. In 2018, Turkey completed the construction of a new $2 billion port in Turkmenbashı. In 2019, 23,802 railway wagons traversed the Caspian between Turkmenistan's Turkmenbashı port and Baku, representing 54 percent of the Trans-Caspian railway wagon traffic passing through Baku port.

In addition to its enhanced ability to influence commercial flows in the south Caucasus and Central Asia, Turkey's empowerment of Azerbaijan to regain lost territory has increased Turkey's clout and bolstered its capacity to deploy pan-Turkic, soft power cultural instruments.

Immediately upon Azerbaijan's recapture of the city of Shusha, a historical center of Azerbaijani culture, Turkvision announced it would hold Turkvision 2021 in the recaptured city.  Inspired by the Eurovision song contest, Turkvision was created by the Turkic Council's cultural arm TÜRKSOY (International Organization of Turkic Culture) in cooperation with the Turkish music channel TMB TV.

CONCLUSIONS: Beyond changing the map of the southern Caucasus, the 2020 Nagorno-Karabakh war has cemented Turkey's presence in Azerbaijan and enhanced Ankara's ability to project its influence in Central Asia. By changing the rules of the game in the South Caucasus, Turkey has also upended the geopolitics of connectivity in Central Asia, elevating itself from a transit state to one of the principal agenda-setters of Eurasian connectivity.

Ankara is likely to capitalize on its new position and prestige by rededicating more of its efforts to deepening its level of economic and security cooperation with the Turkic states of Central Asia. As it does so, Turkey could increasingly hold the balance of power between Russia and China in the Eurasian architecture. From such a position of greater geopolitical strength, Turkey could conceivably elect to reverse its current acquiescence to China's Xinjiang policy and pressure Beijing as a power player within the emerging Eurasian architecture.

The manner and extent to which Turkey succeeds in parlaying its soft and hard power gains from the Nagorno-Karabakh War to deepen its strategic partnerships in Central Asia will determine the scope of its power as a Eurasian actor. The outlook is promising.  Benefiting from its inclusion in the Chinese-led BRI network of connectivity across Central Asia, Turkey may have outfoxed China in Azerbaijan to become a rising Eurasian power.

Professor Michaël Tanchum teaches international relations of the Middle East and North Africa at the University of Navarra, Spain and is a Senior Fellow at the Austrian Institute for European and Security Studies (AIES). He also holds fellow positions at the Truman Research Institute for the Advancement of Peace, the Hebrew University, Israel, and at the Centre for Strategic Policy Implementation at Başkent University in Ankara, Turkey (Başkent-SAM).  @michaeltanchum

More in this category: « In the Grip of the State: Can Turkey’s Democrats Surmount State Nationalism? The Turkish Economy after Albayrak: The Limits of Monetary Reset »
back to top