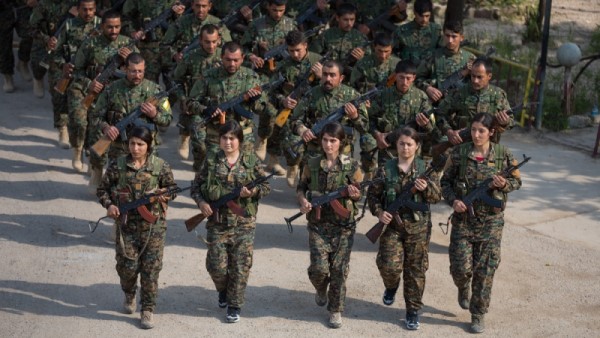 BACKGROUND: On September 12, 2021, Kemal Kılıçdaroğlu, the leader of the main opposition Republican People’s Party (CHP), stated that the pro-Kurdish Peoples’ Democratic Party (HDP) – the third biggest party in the Turkish parliament – would be a “legitimate interlocutor” in talks to explore a solution to the long-standing problem. In so doing, Kılıçdaroğlu reignited the discussion about Turkey’s Kurdish problem. Kılıçdaroğlu further sought to distinguish between the HDP and the outlawed Kurdistan Workers’ Party (PKK), saying that it had been wrong to negotiate with PKK leader Abdullah Öcalan, as the Justice and Development Party (AKP) government did between 2013 and 2015.

These talks resulted in a historic agreement to overhaul the Turkish constitution and establish a “democratic republic” respectful of ethnic pluralism. In return, Öcalan was to call on the PKK to lay down its arms. Initially, President Recep Tayyip Erdoğan welcomed the accord that was presented at the Dolmabahçe palace in Istanbul on February 28, 2015 by Deputy Prime Minister Yalçın Akdoğan, Interior Minister Efkan Ala and the HDP member of parliament Sırrı Süreyya Önder.

But then, under unclear circumstances, Erdoğan suddenly disowned the accord and reversed course. Why this happened has been the subject of considerable dispute. Erdoğan was most likely forced to do so by the military; the Chief of the General Staff had a few months earlier warned the government against pursuing the peace process with the PKK. An alternative explanation is that Erdoğan himself concluded that his government had gone too far in accommodating the Kurdish demands. This is most unlikely, however, since it assumes that the president had been unaware of what the government had agreed to. Others have subscribed to the explanation that Erdoğan was angered when he realized that the HDP was not going to endorse his bid for a presidential system, and decided to punish the Kurds. This explaination, though, ignores that Erdoğan’s attempt to bring the conflict with the Kurds to a peaceful solution was sincere, albeit unrealistic. Erdoğan is the first Turkish leader to have publicly displayed a relaxed attitude about his own ethnic idenitity – his family origins are Georgian – and he had already in 1991, when he was a leading member of the Islamist Welfare Party, proposed that Kurds and other minority groups be officially recognized and defended their right to receive education in their own languages.

In contrast, Kılıçdaroğlu – who is of Kurdish origin but leads a party that is fiercely Turkish nationalist – has until now been careful not to challenge state orthodoxy about the Kurds and ethnicity. But with presidential and parliamentary elections scheduled to be held in 2023 – and which many suspect will be called earlier – Kılıçdaroğlu is electioneering: Kılıçdaroğlu has been signaling that he intends to run for the presidency; to win, he – or whoever is the candidate of the allied opposition – will need to court the Kurdish voters, without alienating the Turkish nationalist base of the CHP and its main alliance partner, the nationalist Good Party. Erdoğan, meanwhile, will need to win back the Kurdish voters that have deserted him in droves since he teamed up with the far right Nationalist Movement Party (MHP) in 2015 to be re-elected, after rescinding the Dolmabahçe accord.

IMPLICATIONS: By arguing that the HDP – unlike Öcalan – is a legitimate interlocutor with “popular support and represented in the parliament,” the CHP leader chose to overlook that Öcalan enjoys significant support among Turkey’s Kurds. Presumably, Kılıçdaroğlu calculates that he will sway the Kurds by embracing the HDP – which is supported by seven out of ten Kurdish voters – while hoping to reassure Turkish nationalists by demonstrating that this does not suggest that he would be engaging in talks with Öcalan and the PKK. Yet while drawing a sharp distinction between the HDP and Öcalan may make sense as an election strategy, it does not as a strategy for solving the Kurdish problem.

A solution has eluded Turkey not because the state has negotiated with an ostensibly illegitimate interlocutor, but because the Turkish side fears that meeting the Kurds’ demands would jeopardize the integrity of the state and the nation. A solution will only be reached if Turkish fears are allayed while Kurdish demands are satisfied. In theory, an open, democratic process could help reconcile Turkish fears and Kurdish demands by “educating” public opinion, but the trouble with Kılıçdaroğlu’s emphasis on the legitimacy of the Kurdish interlocutor is that it obscures the real reasons why a solution has not been possible to reach, and thus fails to acknowledge the magnitude of the challenge.

Kılıçdaroğlu’s statement prompted Sezai Temelli, a former co-chair of the HDP and a member of parliament, to retort that “the real address and interlocutor of a democratic solution is İmralı (the island in the Sea of Marmara where Öcalan has been incarcerated since 1999).” That statement, though, was disputed by the HDP’s imprisoned former co-chair Selahattin Demirtaş, who tweeted that “the HDP aspires to help solve all of Turkey’s problems, including the Kurdish problem,” and stressed that “the address for the solution is naturally the Turkish Grand National Assembly (the parliament),” making no reference at all to the PKK leader. Meanwhile, Mithat Sancar, the present co-chair of the HDP, took a third, middle position, insisting that “İmralı is also going to have a role in this issue.”

The discordant messages from the HDP highlight the deep-running fissures in the party, which is yet to decide whether it is going to be a democratic left party for Kurds as well as for Turks – which Demirtaş advocates – or an ethnic party that pushes for autonomy for the Kurdish provinces of Turkey in accordance with the PKK’s goals and directives, even though it admittedly mostly leans in the latter direction. The PKK is known to resent Demirtaş, who is as disliked by hard line Kurdish nationalists as he is feared by the nationalist Turkish state establishment.

Nonetheless, the Kurdish movement represents a united challenge to the established identity of the Turkish state and nation; whoever is the interlocutor on the Kurdish side, the Turkish side will still have to come to terms with the fact that a solution will remain out of reach unless it accommodates the Kurds’ demand for a “democratic republic,” with the Kurds officially being recognized as its founding partner. Any renewed attempt to solve the problem will inevitably return Turkey to February 28, 2015, and revive the spirit of the Dolmabahçe accord; the Kurdish side is unlikely to be satisfied with anything less than what the Turkish government acquiesced to in 2015, when the two sides agreed to develop “a pluralistic, democratic understanding of and recognition of identity” and to “define the democratic republic, the common fatherland and nation in accordance with democratic criteria” and to enshrine this pluralism in an amended constitution. Kılıçdaroğlu has reopened the Pandora’s box, but there is no reason to assume that the resistance from the state security establishment that killed off the Dolmabahçe accord has abated. On the contrary, that resistance is likely to have stiffened.

The Turkish state had been prepared to go a long way toward accommodating the Kurdish movement in order to ensure that PKK laid down its arms, but ultimately concluded that this would have been too dangerous for the security of Turkey. With the PKK-affiliated Kurdish militia – armed and protected by the United States – having established a de facto mini-state in northern Syria, Turkey could ill afford, as Ankara saw it, the risk that the PKK and the HDP would feel encouraged to push for a greater Kurdistan, encompassing southeastern Turkey and northern Syria. The recent U.S. decision to allocate $170 million to the Kurdish militia in Rojava will certainly not alter the perception in Ankara that it faces an American-Kurdish threat against which it must remain vigilant.

CONCLUSIONS: The Kurdish voters have become critical for the outcome of elections in Turkey, as most recently the municipal election in Istanbul in 2019 demonstrated. The opposition candidate, Ekrem İmamoğlu, prevailed only because the imprisoned former co-chair of the HDP Selahattin Demirtaş instructed the Kurdish voters to vote for him. In response, the ruling AKP-MHP alliance also had to resort to playing the Kurdish card, soliciting the support of the brother of Abdullah Öcalan, who on state television called on the Kurds to vote for the regime’s candidate.

This is an ironic development because the presidential system was introduced partly in order to neutralize the impact of the Kurdish movement, by removing power from a parliament where the HDP had come to wield significant influence to the presidency.

While a solution to the Kurdish problem will likely continue to remain out of reach, Turkey has no alternative but to muddle through, alternating between cautious reform and clampdown. Turkey can only hope that regional developments, and in particular American policies in its neighborhood, will not contribute to bringing things to a calamitous head between Turks and Kurds.

Halil Karaveli is a Senior Fellow with the Central Asia-Caucasus Institute & Silk Road Studies Program Joint Center, and Editor of the Turkey Analyst. He is the author of Why Turkey is Authoritarian: From Atatürk to Erdogan (Pluto Press)