Soaring inflation and the record low value of the Lira have exacerbated Turkey's food crisis, which has been precipitated by the local and global economic shocks of the COVID19 pandemic and its 2021 aftermath.  The severe nature of the food crisis has revealed something deeper and more systemic – Turkey's current food system cannot effectively cope with increased water scarcity and debilitating climate change. Turkey's promotion of exports, including cash crop agricultural exports, by allowing the Lira to slide in value has exacerbated the problem in several ways and may impede Turkey from implementing necessary measures to avert a larger food security crisis. 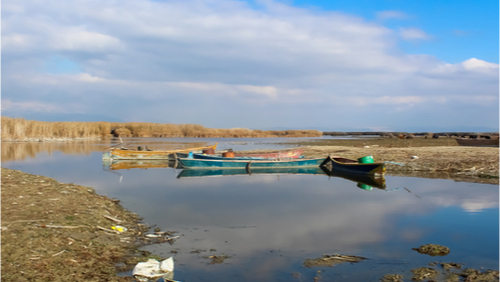 BACKGROUND: Inflation in Turkey has reached the tipping point.  Despite Turkey's strong 2021 GDP growth following 2020's COVID19-driven contraction, the international financial community is worried about Turkey.  While praising the rise in Turkey's GDP, the World Bank's Vice President for Europe and Central Asia Anna Bjerde sounded an alarm about inflation and the rise of poverty in Turkey. Following mid-November meetings in Ankara, the World Bank official told Turkish media that "with COVID-19 and now with some of these economic parameters, particularly inflation, we would worry about poverty again.”  There is cause for concern. Since Turkey's economic difficulties in 2018 followed by the COVID-19 pandemic-induced economic contraction, more than an additional three million Turkish citizens had fallen  below the poverty line by June 2021, representing about a 40% increase. The rise in poverty stands in direct correlation to the inflation rate, which has significantly worsened since June.

The Turkish Statistical Institute places Turkey's October 2021 consumer inflation at a worrying 19.89%. However, the Inflation Research Group (ENAGrup), composed of academics and former government officials, estimates Turkey's real October 2021 inflation rate to be an alarming 49.87%. If the independent figure is to be believed, then Turkey is at the border of hyperinflation, defined by higher than 50% inflation for several consecutive months. In mid-November, the value of the Turkish Lira plummeted to a record low, crossing the psychologically important line of 10 Lira against the U.S. dollar. Following a further 1% interest rate cut by Turkey's Central bank on November 19th, Turkey's currency plummeted through a new floor of 11 Lira against the dollar. Overall, the Turkish Lira has lost 30% of its value during 2021.

Turkish consumers have been feeling the sting of runaway inflation most immediately in the cost of food, particularly bread. Turkey's October 2021 rate of food inflation stood at 27.41% year-on-year. In early October, the government of Turkish President Recep Tayyip Erdoğan ordered the expansion of the network of grocery stores operated by Turkey's Agricultural Credit Cooperatives (Türkiye Tarım Kredi Kooperatifleri) adding 1,000 stores to the current 500.  Yet the 1,500 stores cannot match the market coverage of Turkey's major supermarket chains such as the largest chain BIM Birleşik Mağazalar A.Ş. with approximately 8,500 stores nationwide. The Erdoğan government hopes to deter from raising food prices further as well as to combat hoarding, which serves to drive prices even higher.  A few weeks prior to the new grocery stores initiative, Ankara launched a high-profile investigation of Turkey's five largest supermarket chains – BIM, Migros, CarrefourSA, Şok Marketler and Yeni Mağazacılık (A101) – over accusations of overpricing. The case caused a 2% market cap drop for BIM and 3-4 % drop for the others. On 29 October, the government's Competition Authority fined the five, along with supplier Savola Gıda, a total of $283 million.

IMPLICATIONS: Despite the grandstanding, designed in part to help Erdoğan and his flagging Justice and Development Party in an uphill battle for Turkey's 2023 elections, Ankara realizes that the problem is much more systemic. Already in early September, the government reduced the import customs duty on cereal grains to zero for the remainder of 2021. The cancellation of import duties on cereal grains was a critical stop gap measure as Turkey is the world's third largest importer of wheat, with 2020 total wheat imports worth $2.33 billion.  At first glance, Turkey's status as a top 5 wheat importer may seem counter intuitive as Turkey is also the world's 11th largest producer of wheat.  However, Turkey's own production cannot provide sufficient wheat to meet its domestic demand while concurrently supplying its lucrative flour, baked goods, and pasta export industries. In 2019, Turkey produced 19 million tons of wheat flour, being the country's largest agricultural crop by weight and third most valuable food commodity surpassed only by whole milk and tomatoes.  Wheat flour and pastas (macaroni) constituted Turkey's largest 2019 food exports by quantity, 3.3 million tons and 1.2 million tons respectively, with baked goods and breakfast cereals ranking 11th and 13th.  In terms of export revenues, wheat flour is Turkey's second most valuable food export, surpassed only by hazelnuts, and earned $1.1 billion.  Turkey's baked goods were the 4th largest food export earner, closely following prepared nuts while pastas were the 7th largest food export earner.

This year Turkey's wheat deficit will be even more acute. Turkey’s total wheat production has been forecast to drop to 16.5 million tons in the 2021/22 marketing year (MY) compared with 18.3 million in MY 2020/21 and 19.2 million in MY 2019/20.  Over the course of the last 20 years, the cost of Turkey's wheat imports have risen drastically from $150 million to $2.33 billion in 2020.  Of the $2.33 billion Turkey spent on wheat imports, $1.5 billion worth came from Russia. Ukraine, which is Turkey's second largest supplier, pales in comparison with $246.4 million.  Russia and the rest of the Black Sea region producers have experienced crop damage due to dry weather conditions. The price of soft wheat used in bread manufacture stood at $271 per ton at the end of 3Q 2021, a 22% year-on-year increase. The price in 4Q 2021 has shot up further. With the reduction of global inventories, now those wheat imports are costing Turkey even more. The soft wheat price on the Chicago Board of Trade on November 15, 2021 stood as high as $8.26 per bushel, representing about a 60% spike from July 1, 2021 and a price not seen since 2013 – the year of the Gezi Park protest movement.

One of the main ways the cost of energy is passed onto food production is through the use of fertilizers, whose manufacture is energy intensive. In the case of nitrogen-based fertilizers, the energy cost is even higher as the natural gas or coal used as a chemical component in their manufacture. In the case of wheat fertilizer, about 80% of the production cost comes from natural gas, the price of which has jumped five-fold for European fertilizer manufacturers and about 1.5 times for manufacturers in the U.S. In 2018, Turkey used 109.73 kg of fertilizer per hectare, causing Turkey to have a fertilizer consumption rate – the percentage of its domestic fertilizer production – equaling 149%. Between 2018 and 2020, Turkey's fertilizer costs more than doubled. With soaring natural gas price combined with the plummeting value of the Lira, Turkey will have difficulty meeting its fertilizer costs.

Turkey's top food export – hazelnuts – requires 9,807 liters of water per kilogram compared to about 1,500 liters to produce 1 kg of wheat. Cotton, one of Turkey's premier cash crops, is even worse requiring about 11,000 liters per kg. Turkey is the world's 7th largest producer of cotton and the 9th largest exporter.  More than a raw material export, cotton plays an essential role in Turkey's textile and apparel exports. Turkey's textile and apparel industry generally accounts for at least 10% of the country’s GDP and currently employs over a million Turks. In 2019, Turkey's combined textile and apparel exports totaled $26 billion, representing 21.8% of its total exports. Even during the low demand year of 2020, due to the COVID-19 pandemic, Turkey's  ready-to-wear apparel exports were $17.1 billion and textile and raw materials exports were $7.3 billion.

CONCLUSIONS: As climate-driven challenges to its domestic agricultural production intensify, Turkey is in danger of becoming increasingly reliant on imports for its food security. Turkey's cultivation of cash crops has depleted groundwater aquifers and dried out river systems and lakes – including Lake Tuz, the country's second largest lake.  Many farmers have resorted to drilling illegal wells that tap groundwater that is already at very low levels.  The record low water levels in the dams that supply Turkey's major cities with clean water for consumption and hygiene have also put Turkey's water security at risk.

The food-energy-water nexus places Turkey in a conundrum.  With an ailing economy needing the infusion of increased foreign export revenues, Turkey cannot easily abandon its lucrative, yet high water-consuming cash crops, now made more attractive to foreign buyers by the Lira's low value. Solutions such as improving Turkey's irrigation systems and building desalination plants all require extensive capital investment.  Desalination and increased fertilizer production are also energy-intensive, making Turkey vulnerable natural gas price shocks or requiring further capital investment for additional power generation capacity from renewable energy sources.  The Lira's low value means that the cost of implementing such measures becomes prohibitively expensive, while the cost of delay in implementing the necessary measures could be catastrophic for Turkey's food and waters systems, as well as the country's social stability.

On October 4, 2021, Turkey's Ministry of Agriculture hosted the inaugural meeting of the country's Water Council, which includes scientists, local government officials and NGOs, to work towards planning a program to address increasing water scarcity driven by climate change.  While a positive step, Turkey has little time to lose in implementing a comprehensive solution if potentially disastrous consequences are to be averted.

Prof. Michaël Tanchum teaches international relations of the Middle East and North Africa at the University of Navarra, Spain and is a Senior Associate Fellow at the Austrian Institute for European and Security Studies (AIES) and a non-resident fellow in the Economics and Energy Program at the Middle East Institute in Washington, D.C.  and at the Centre for Strategic Policy Implementation at Başkent University in Ankara, Turkey (Başkent-SAM). He is also a Associate Senior Policy Fellow in the Africa Program at the European Council on Foreign Relations (ECFR)  @michaeltanchum

Read 9370 times Last modified on Thursday, 02 December 2021
Tweet
Tagged under
More in this category: « Normalization between Armenia and Turkey: Can it succeed? Is There Any Solution to Turkey’s Kurdish Problem? »
back to top