Turkey and the Ukraine War: Ankara Charts its Own Course 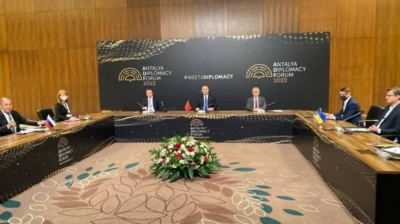 BACKGROUND: As was the case with past Russian regional incursions (2008, 2014), Ankara has embraced the NATO position on Russia’s war on Ukraine rhetorically but has refused to impose sanctions on Russia. This time there are some new elements in the paradigm, however, in what amounts to a clear tilt toward Ukraine not only rhetorically but militarily as well.

Most notably, Turkey has continued to sell armed drones to Ukraine, at least some three dozen in all; Ukraine has reportedly staged more than sixty attacks on Russian forces with Turkish drones, which were also reportedly critical to the targeting and dramatic sinking of the Russian Black Sea flagship Moskva. Drone sales, which began in 2019, are part of a Turkish national policy of bilateral military cooperation with Ukraine, rather than undertaken in coordination with NATO.

Further, Turkey has closed the Straits to Russian military vessels – except those returning to home-ports, per Article 19 of the Montreux Convention – its first such closure since World War II. However, it has also gone beyond the privileges granted it in Montreux by asking “non-riparians,” widely understood to mean NATO, not to request permission to enter the Black Sea. (Of course, NATO members Bulgaria and Romania are Black Sea riparians, but their Black Sea naval presence is dwarfed by Russia’s.) Initially, this decision seemed to favor Russia, locking in its naval dominance in the Black Sea, seemingly uncontestable before the Moskva incident. It is now clear, however, that the Straits closure will indeed limit Russia’s ability to reinforce its Black Sea fleet, which could have a meaningful impact on the fighting as the war drags on.

Aside from its pro-Ukrainian declarative policy, the drone sales, and the Straits closure, Turkey took an additional, mainly symbolic action aimed at Russia on April 23 when it closed its airspace to over-flights by Russian military aircraft headed to Syria (as well, it said, to Russian civilian aircraft ferrying military personnel to Syria). This action inconveniences (but does not prevent) Russian re-supply efforts for its troops in Syria, forcing Russia to access Syria roundabout via Iran and Iraq rather than more directly via Turkey and the Mediterranean.

Meanwhile, Erdoğan has emphasized that Turkey “will not abandon Russia or Ukraine,” pledging not to impose sanctions on Russia.  Ankara has put out a welcome mat for Russian oligarchs, with Foreign Minister Mevlut Çavuşoğlu declaring that “all are welcome, as long as they obey international law.” There are reports of Russian companies relocating to Turkey – 64 Russian-owned businesses were established in Turkey in March, nearly four times as many as in March 2021 – as well as thousands of Russian individuals. It can be expected that numerous Russians will avail themselves of Turkey’s “golden passport” law, which grants citizenship within 3-4 months to foreigners investing at least $250,000 in real estate or $500,000 in government bonds, companies, investment funds, or local bank accounts. Meanwhile, Turkey plans to facilitate the flow of Russian tourists with a new tailored-purpose airline that will greatly expand the number of flights between Russia and Turkey.

Banks in Turkey – apparently wary of engaging in sanctionable behavior – require Russian individuals and companies opening accounts to prove that they are not sanctioned by the EU or US, according to Turkish sources and Forbes.com. Western governments no doubt are nevertheless concerned that Turkey will abet sanctions circumvention for Russia, as it allegedly did for Iran, via Halkbank, roughly a decade ago. But whatever the windfall from oligarchs and other Russians who relocate to Turkey, it is not enough to compensate for the huge economic losses the war has wrought.

As perhaps a further sop to Russia, Turkey may be applying the Montreux closure in a somewhat raggedy manner. There are reports that, in at least two instances since the closure, Russian commercial ships carrying military personnel and supplies have transited the Straits into the Black Sea. (Russian commercial vessels have the right to transit, per Montreux, but only if they are strictly commercial.) These reports were effectively affirmed by the State Department in sanctions issued May 8 targeting Russia’s maritime sector.

Reinforcing and, Ankara hopes, justifying this policy of outreach to both sides is Turkey’s much-publicized effort to achieve a cease-fire. An end to hostilities would bring down food and energy prices in Turkey; revive lost imports, exports, and tourism; and generally resuscitate Turkey’s ailing economy. That, in turn, could boost Erdoğan’s far-from-assured re-election prospects next year.

Turkey has established itself as the leading promoter of cease-fire efforts and has actively sought to host an encounter between Vladimir Putin and Volodymyr Zelensky. Meetings of the Russian and Ukrainian foreign ministers in Antalya on March 10 and of Russian and Ukrainian negotiating teams in Istanbul March 29 appear not to have resulted in progress. They put Turkey in the international media spotlight, however, and won Turkey significant international acclaim.

Turkey’s cease-fire initiative serves at least three diplomatic purposes for Ankara. It is a reminder to all that Turkey is among the few states in the world that have good and important relations with both sides. It helps Ankara to sustain those ties, even as its policies do not fully satisfy either warring party. And, most important from Turkey’s standpoint, it provides Ankara with a strong argument justifying its refusal to impose sanctions on Russia.

It is a significant diplomatic success for Turkey and Erdoğan that Russia, Ukraine, the EU, and the US are all acquiescing to this high-wire act so far. While satisfying nobody completely, Turkey is winning mainly kudos from all, with only occasional mild criticism sprinkled in. Remarkably, Russia, the US, and Ukraine have all praised Turkey’s mediation efforts and its management of the Straits – the latter two pleased with limitations on Russian Black Sea reinforcements, Moscow satisfied with the exclusion of “non-riparians.”  Meanwhile, the US and EU have barely mentioned Turkey’s refusal to impose sanctions, seeming to accept the Turkish argument that sanctions on Russia could push Turkey’s economy over the edge.

Ukraine has repeatedly praised Turkey for selling it drones well before most NATO states would provide military equipment of any sort. Meanwhile, Kyiv, too, has said little about Turkey’s policy on sanctions, though that policy no doubt sticks in Kyiv’s craw. Zelensky recently criticized Turkey for its plan to facilitate tourism from Russia, but his ambassador in Ankara walked back that criticism the following day.

Prior to the war and in its early days, Moscow occasionally criticized Turkey’s drone sales, for example when Ukraine used the drones to attack Donbas rebels in October 2021. In recent weeks, however, Russia has said next to nothing, even though the drones are continuing to take on its military effort.

As the war has reinforced Turkey’s preference for strategic autonomy, it is unlikely that it will result in appreciably closer Turkish ties with the US and NATO. That is not to say that the West shouldn’t explore the possibility. Yet, all the fundamental problems bedeviling US-Turkish and European-Turkish ties in recent years – S-400s, YPG, Fethullah Gülen, human rights, Cyprus – remain fully extant for now. The war thus far has not diminished their importance to the relevant actors.

Turkey may look for opportunities to take advantage of Russia’s preoccupation with Ukraine, or war-induced weakening, by pushing for gains in the Caucasus and Central Asia and possibly elsewhere, such as Syria and Libya. This would align Turkey with the Western strategic interest in rolling back Russia, but Turkey would be pursuing this course of action for national, rather than NATO, purposes.

A prominent theme among pro-government Turkish media commentators is that the US and NATO are the real cause of the war, having, in effect, goaded Russia into it by championing prospective NATO membership for Ukraine. This notion has been readily absorbed by Turkey’s public opinion, ever suspicious of Western behavior and motives. According to a mid-April survey by Metropoll, 46 percent of Turks blame the US and NATO for the war; 30 percent blame Russia; and 9 percent blame Ukraine. Strikingly, a plurality of voters of every major-party preference, including the two main opposition parties and the pro-Kurdish HDP, shares the overall view that the US and NATO bear primary responsibility.

Perhaps because of Erdoğan’s heretofore success navigating the Ukraine-Russia-US-NATO constellation, his previously reeling political popularity seems to have recovered somewhat, at least for the moment. According to the latest Metropoll survey, taken in mid-April, Erdoğan continues to trail Ankara Mayor Mansur Yavaş by 10 points in a head-to-head presidential contest, but he is now ten points ahead of CHP leader Kemal Kılıçdaroğlu, widely projected as the most likely candidate of the consolidated opposition.

Its geopolitical profile heightened by the war, Turkey is hopeful of increased security cooperation with Europe and the US. In the case of the former, Turkey, France, and Italy have revived moribund talks on Eurosam’s SAMP-T air defense system. Meanwhile, the UK has eased an EU-inspired arms embargo imposed on Turkey in 2019, and Germany and the Netherlands reportedly may follow suit.

The appalling life sentence meted out by a lower court to peaceful activist Osman Kavala, along with 18-year sentences for seven co-defendants, belies any notion that a politically vulnerable Erdoğan will bend over backwards for the sake of ties with the West. On the contrary, the verdict in the Gezi case suggests that a geopolitically self-confident, Erdoğanist Turkey feels it can blithely disregard Western human-rights concerns.

CONCLUSIONS: As artful as Turkey’s diplomatic tightrope-walk has been thus far, there is no guarantee it can be sustained indefinitely. At some point – especially if Russia were to consolidate its occupation of wide swaths of Ukraine -- Western pressure may grow on Ankara to align itself with US/EU sanctions policies. On the other hand, Russia at some point may react more fiercely to Turkish drone sales and other assistance to Ukraine. To this point, however, all sides seem to view the pluses of Turkish policies as outweighing the minuses.

The Ukraine war has enhanced Turkey’s international diplomatic standing and its geopolitical value for the West. However, the war is also re-inforcing the “strategic autonomy” the Erdoğan regime has pursued in recent years, while domestically buttressing the regime’s authoritarian conservatism.

Alan Makovsky is a Senior Fellow at the Center for American Progress, a think-tank based in Washington, DC.

More in this category: « Conservatism as Solution: Can the Nation Alliance Solve Turkey’s Problems? Rejecting Democracy: What Turkey has in common with Russia and Iran »
back to top