One Step from the Brink: Turkey's Kurdish Peace Process Edges Closer to Collapse

On September 9, 2013, the Kurdistan Workers’ Party (PKK) announced that it had halted the phased withdrawal of its militants from Turkey but would continue with its temporary ceasefire in order to give the Turkish government a last opportunity to meets its demands for greater rights for the country’s Kurdish minority.

BACKGROUND: In December 2012, Prime Minister Tayyip Erdoğan instructed members of the Turkish National Intelligence Organization (MİT) to initiate a new dialogue with PKK founder Abdullah Öcalan, who has been incarcerated on the prison island of İmralı since February 1999. The decision was hailed by members of Erdoğan’s Justice and Development Party (AKP) as a “courageous” attempt to put an end to a conflict that has cost over 40,000 lives since the PKK first launched its insurgency in 1984. Some AKP officials even suggested that the insurgency was all but over.

There were always doubts about whether Erdoğan was genuinely committed to addressing the Kurdish nationalist grievances that fuel the PKK’s insurgency or whether he was merely looking to weaken the PKK by forcing it to suspend its campaign of violence. Erdoğan appears to have calculated that, with local and presidential elections due in 2014, if he could prevaricate long enough, he would be able to reap the political benefits of bringing “peace” to the predominantly Kurdish southeast of Turkey without having to fear the Turkish nationalist backlash that could accrue from making any concrete concessions to Kurdish nationalist demands. Even if the PKK lost patience and returned to violence, he could claim that he had tried his best to resolve the issue peacefully and that, despite its repeated public statements to the contrary, it was the PKK that was not interested in a negotiated solution to the Kurdish issue.

Although he has never been short of self-belief, Öcalan is neither a subtle thinker nor a skilled strategist. His incarceration on İmralı accelerated the transformation of his image from that of a clumsy and often brutal insurgent commander to a living martyr and a Kurdish nationalist icon. He appears to have regarded the dialogue with MİT as his long-awaited chance to change history. He immediately began formulating plans not only to solve the Kurdish issue in Turkey but to reshape the entire Middle East. Many in the PKK were skeptical of Öcalan’s intentions. But, given the heights to which the organization had elevated him in its propaganda, once the dialogue had been embraced by Öcalan, the organization had little choice but to do likewise.

Rationally, any comprehensive solution would require the involvement of both the pro-Kurdish Peace and Democracy Party (BDP) and the PKK leadership in northern Iraq. But Erdoğan refused to allow either to play an active role in the negotiations, although he did permit members of the BDP to meet with Öcalan on İmralı and relay messages from him to the PKK high command in northern Iraq.

In a message entitled the “Democratic Liberation Manifesto”, which was made public at the Kurdish New Year on March 21, 2013, Öcalan called on the PKK to declare a unilateral ceasefire and to begin withdrawing its units from Turkey. The PKK duly complied. The withdrawal began on May 8, 2013.

Öcalan appears to have been confident that he would be able to convince the AKP to accept his demands. Over the months that followed, he produced numerous detailed proposals for a solution, including the establishment of eight parliamentary commissions to formulate the reforms necessary to meet Kurdish demands, ranging from full language rights to the devolution of many of the powers of the central government to local administrations.

Öcalan’s interlocutors from MİT have not produced any counter proposals from the AKP. Instead, Erdoğan has publicly announced that he will unveil what he describes as a democratizing reform package before parliament returns from its summer recess on October 1, 2013. He has refused to provide details, except to say that the package will not meet any of the main Kurdish nationalist demands.

IMPLICATIONS: The PKK has long regarded its insurgency primarily as a means of forcing the Turkish state to the negotiating table, where it can then try to extract concessions to its demands. It is aware that it needs to suspend its campaign of violence for the duration of any talks. But the PKK also uses violence to assert its claim to leadership of the Kurdish nationalist movement. When PKK militants are killing – and, more importantly, being killed – for the cause, other Kurdish nationalists tend to unite behind the organization. When the PKK is quiescent, the divisions in the Kurdish nationalist movement become more pronounced and non-violent activists and organizations come to the fore. In addition, if the PKK maintains a ceasefire for a long time without extracting any concessions from the Turkish state, it risks not only marginalization but being perceived as weak and ineffectual.

The lack of progress in the dialogue on İmralı has been in marked contrast to the achievements of Kurds elsewhere. In northern Iraq, the Kurdistan Regional Government (KRG) has been moving closer to full independence. In Syria, the Democratic Union Party (PYD) has now established a de facto autonomous Kurdish region in the north of the country, arguably achieving more in a little over 12 months than the PKK has achieved in nearly 30 years. Although the PYD shares the PKK’s ideological allegiance to Öcalan’s teachings, the two are organizationally distinct. Despite public expressions of solidarity, in recent months relations have often been strained – not least by the PYD’s insistence that its primary focus has to be on preserving its gains inside Syria. Privately, PKK sources report that, unlike in previous years, recruitment from Syrian Kurds has declined considerably as most now opt to join the PYD.

Further indication of a change came on July 10, 2013, when the PKK announced a reshuffle of its leadership. Nurettin Sofi, the Syrian national who had headed the organization’s military wing, the People’s Defense Force (HPG), since April 2009 was replaced by Murat Karayılan, the former chair of the PKK’s Executive Committee. In accordance with the PKK’s theoretical commitment to gender equality, Karayılan was replaced by two co-chairs, the veteran Cemil Bayık and Hülya Oran, who is better known by her nom de guerre of Besi Hozat. In practice, the PKK is now commanded by Bayık, who is one of the few surviving founders of the PKK and a notorious hardliner.

In one of his first public statements after his appointment, Bayık declared that the PKK was giving the AKP two deadlines: September 1, 2013 to announce details of the concessions that it was preparing to make to Kurdish demands and October 15, 2013 to implement them. On July 25, 2013, a BDP delegation announced after meeting with Öcalan that he believed he had done everything possible and that it was now up to the AKP to take the next step. On August 15, 2013, Karayılan announced that the PKK had restructured the HPG and brought it under a new command unit, known as the People’s Defense Center (HSM). Karayılan added that the PKK was also introducing new training programs to “professionalize” its fighting units and improve their operational capabilities.

Erdoğan appears to have been unperturbed by the warning signs. He made no effort to announce any reforms ahead of the September 1 deadline. Although he is still expected to announce a “reform package” over the weeks ahead, any legislative changes related to the Kurdish issue are expected to be minor or cosmetic. Nevertheless, the PKK appears likely to wait either for the package to be announced or for the expiry of its second deadline of October 15 before making a decision on whether or not to renew its insurgency.

It is unclear what proportion of PKK militants had already left Turkey by the time that the organization announced that it was halting the withdrawal. Some PKK sources have put the figure at around 60 per cent, while AKP officials have claimed that it is as low as 15-20 per cent. However, the pullout does appear to have been uneven, with the PKK retaining a strong presence in some areas while effectively vacating others. Rather than walking all the way to northern Iraq, some militants – particularly those who were recruited locally – appear to have merged into the civilian population.

Even if the PKK does announce an imminent return to violence, it is unlikely to be able to redeploy its units and re-establish its supply chains before the first winter snows begin to fall in late October. As a result, it is likely to be at least spring 2014 before its rural insurgency can return to the levels of summer 2012. But there is a danger that, in order to compensate, it may decide to stage a large-scale operation either in the mountains before the snow falls or in an urban area. 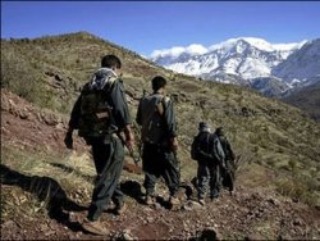 CONCLUSIONS: On September 8, 2013, Erdoğan claimed that the AKP’s polls showed that the party is now running at 55 per cent in southeast Turkey, up from 35 per cent a year ago; a change that he attributed to his decision to initiate a dialogue with Öcalan. There has been no independent confirmation of Erdoğan’s figures. Even if accurate, the fact that Erdoğan cited them appears to reinforce the suspicion that his motivation in starting the dialogue was not to resolve what has long been Turkey’s most intractable problem but to secure a political advantage ahead of the local and presidential elections in 2014.

Perhaps most revealing was what Erdoğan did not say: namely to explain why, after nine months of talks, the Turkish government has still not produced any proposals to resolve the Kurdish issue. The fact remains that, regardless of their individual merits, all of proposals are still coming from the Kurdish nationalist side.

Alarmingly, Erdoğan appears genuinely convinced that the solution to the Kurdish issue is the status quo without PKK violence. It is a dangerous delusion. If the PKK eventually returns to violence, Erdoğan may be able to convince some Turks that the organization was responsible for the collapse of the dialogue with the Öcalan. He will not be able to convince the country’s Kurds. Unless Erdoğan moves quickly, the consequences – both for the security situation in southeast and for interethnic relations between Turks and Kurds in the rest of the country – could be severe.

More in this category: « Unrest is Breeding among The Alevis Fifty Years after the Ankara Agreement: the Need for New Commitments »
back to top