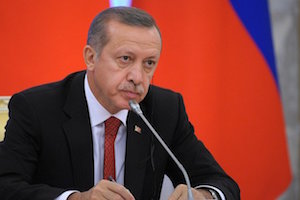 BACKGROUND: On March 25, 2018, during an address to a provincial congress of the ruling Justice and Development Party (AKP) in the Black Sea port of Samsun, President Recep Tayyip Erdoğan railed against the “artificial borders” that he claimed had been imposed on the modern Turkish Republic. The country, he said, was undergoing “a resurrection”. He vowed that “if necessary we shall give our lives, if necessary we shall take lives” in order to make Turkey great again.

Erdoğan’s speech came one week after the Turkish security forces and an assortment of Syrian rebel militias -- which in December 2017 Ankara had collectively rebranded as the Syrian National Army (SNA) -- drove the Kurdish People’s Protection Units (YPG) out of the Syrian city of Afrin. The fall of the city capped a two-month campaign and consolidated Turkish control over most of northwest Syria, adding to the territory captured in Operation Euphrates Shield in August 2016 to March 2017, where Ankara has already established a neo-colonial administration.

Publicly, Erdoğan has repeatedly insisted that Ankara remains committed to Syria’s territorial integrity and has described both Operation Euphrates Shield and the campaign in Afrin, the Orwellian-named Operation Olive Branch, as part of a plan to return the territories to “their rightful owners” – which in practice appears to be shorthand for hard-line Sunni Muslim Arab and Turkmen groups which look to Ankara for leadership. As it has already done in the Euphrates Shield area, the Turkish government has said it will to relocate some of the Syrian refugees who have taken refuge in Turkey to the Afrin enclave. Its motivation appears to be twofold: To try to reduce the social tensions in Turkey as a result of the influx of over three million Syrians since 2011 and, by vetting the refugees according to ethnicity and ideological affiliation, change the demographics in a region where the YPG has long enjoyed widespread popular support.

Publicly, Turkish officials insist that Ankara’s military campaigns in Syria and its calls for President Bashar al-Assad to step down are motivated by the desire to allow the Syrian people to democratically shape their own future. In practice, there is little doubt that Erdoğan foresees Turkey establishing a long-term presence in Syria as part of his goal of creating a neo-Ottoman network of Turkish client states in the Middle East.

There currently appears little prospect of Erdoğan realizing his ambitions. Turkey is now more internationally isolated than at any time since he first came to power. But the collapse in its influence and prestige – inside the region as much as in the broader international arena – has been accompanied by a retreat into a self-aggrandizing echo chamber, to the point where the regime often appears engorged with self-belief.

Nostalgia for the Ottoman Empire – or, more accurately, a simplified and largely fictionalized version of it – has long underpinned the AKP’s worldview. Throughout the AKP’s first years in power, it was commonplace for officials to talk of a widespread longing in the region for a return to Turkish hegemony – which would come as a surprise to the majority of the descendants of the sultan’s former subjects in the Balkans and the Middle East. But there has lately been a shift in Erdoğan’s rhetoric from nostalgia to recidivism, as references to the voluntary embrace of Turkish leadership have been supplemented by the language of imposition and military conquest.

Initially, the AKP’s Ottoman nostalgia focused on the empire at its zenith, including a proliferation of books, newspaper articles, feature films, television documentaries, soap operas and even an increase in Ottoman words and expressions. More recently it has seen the emergence of a cult around the person of Sultan Abdülhamit II (reign 1876-1909), who oversaw the modernization of the empire’s infrastructure and government apparatus, as well as a repressive police state and the massacre in the 1890s of tens of thousands of Armenians. Erdoğan himself has publicly praised “Payitaht: Abdülhamit” (“payitaht” is a rarely used word meaning “capital city”), a historical drama about Abdülhamit that began airing on the state-owned TRT television channel in February 2017 – although its script is probably more revealing of the prides and prejudices of the current regime than its purported subject. In addition to books, feature films and television programs, it also possible to buy figurines of the sultan, while some of Erdoğan’s supporters have taken to hanging portraits of Abdülhamit in their offices. Some canny businesses have even started selling suits of clothes similar to those in the most common portraits, thus allowing those who are so inclined to dress like the sultan.

IMPLICATIONS: The shift in the regime’s attitudes towards the Ottomans has been accompanied by an attempt to rebrand the Turkish military. Under the system of military tutelage that prevailed before the AKP took office in 2002, the members of the officer corps often regarded themselves both as the guardians of the Turkish state – albeit mostly with a preference for ensuring it was governed according to their wishes rather than directly administering it themselves – and as having a mission civilisatrice to remould the Turkish masses in accordance with the ideological legacy of the republic’s founder, Mustafa Kemal Atatürk (1881-1938). By the time Atatürk died, the initial dynamism of his reform program – most notably his attempts to manufacture a homogenized nation state and purge Islam from the public space – had begun to evolve into an increasingly conservative personality cult. Although there were occasional exceptions – such as the annexation of Hatay in 1939 and the invasion of Cyprus in 1974 – this conservatism also extended to Turkey’s borders. The emphasis of both military’s public narratives and the contingency plans drawn up by the Turkish General Staff (TGS) was on the preservation and protection of what was regarded as the Atatürk-given territory it already held.

When it first took office, the AKP was wary of antagonizing the military for fear that it would stage a coup. As it grew in confidence from 2007 onwards, the AKP worked with members of the Gülen Movement to weaken the institutional influence of the military through a series of show trials and defamation campaigns. The military’s previously considerable public prestige had already been severely damaged when it was dealt a devastating blow by the attempted putsch of July 2016 – particularly by the televised scenes of putschists opening fire on civilians who took to the streets to try to oppose them. Although much of the attempted coup remains unexplained, Erdoğan has nevertheless used it as an opportunity to try to remake the officer corps in his own image – purging thousands of military personnel, restructuring the armed forces and overhauling officer training and recruitment to try to ensure that the next generation shares his own conservative mindset. Erdoğan has also tightened his control over appointments and promotions, retaining the acquiescent General Hulusi Akar as chief of the TGS and ensuring that other senior officers are subservient not only to his political authority but also to his ideological agenda.

In recent months in particular, the Erdoğan regime has used its almost total control over the flow of information to convince a large proportion of its supporters they are under attack from US and the EU, which have launched an asymmetrical war on multiple fronts. These include the use of disparate militant groups – ranging from the YPG and the Kurdistan Workers’ Party (PKK) to the Islamic State – to conduct terrorist attacks, measures to undermine the Turkish economy and black propaganda by foreign media outlets, while Erdoğan’s domestic critics are portrayed as a treacherous fifth column serving foreign interests. The claims may be absurd, but they are no less viscerally believed.

In the regime’s narrative, it is engaged not just in a struggle for political influence but in a war in which Turkish supremacy, Ottoman recidivism and the defence of Islam have all been melded into a single sacred cause under Erdoğan’s leadership. In recent years, the regime had already sought to Islamize the esprit de corps of the police militias, such as through introducing new oaths of allegiance shaped by religious precepts. But, particularly since the launch of the incursion into Afrin, the regime’s narratives – including a flurry of new feature films and television drama serials – have now also begun to portray members of the regular Turkish military as fighting for Islam as much as their country. Similarly, whereas the previous regime portrayed the modern Turkish army as being part of a continuum stretching back to the time of Atatürk, now the continuum is presented as having its roots in the Ottoman Empire – with the forces of the Erdoğan regime effectively engaged in a rematch with the Ottomans’ enemies.

There are also other differences. During the era of military tutelage, it was commonplace to refer to all Turkish males as being born soldiers. But Turks were left in no doubt that any demonstration of these martial abilities should take place under the command and control of the TGS. In contrast, and especially since July 2016, the AKP has encouraged its supporters to take matters into their own hands and effectively enlist them as auxiliaries in the wars being waged by the state security forces, including urging them to arm themselves and offering them legal immunity if they kill or maim the regime’s perceived enemies (See January 19, 2018 Turkey Analyst). On March 15, 2018, the government even increased the amount of ammunition that a civilian is allowed to own from 200 to 1000 cartridges.

CONCLUSIONS: The military incursion into Afrin appears to have boosted Erdoğan’s popularity in what has already become a sustained election campaign in the run-up to the next presidential election, which is currently scheduled for November 3, 2019. It also seems to have whetted his appetite. Indeed, since January 2018, Erdoğan has begun to talk less about foreigners seeking to undermine his regime and, as in his speech on March 25, more about how they are striving to prevent Turkey from expanding its influence into former Ottoman territories in the Middle East.

The result has been to stoke expectations amongst his supporters of further conquests. But it is difficult to see where else Erdoğan can go. For their own reasons, Russia, Iran and the US all stood back when he invaded Afrin. They are unlikely all to be so compliant if Erdoğan seeks further territorial acquisitions in either Syria or Iraq – and Turkey cannot afford a major military confrontation with Moscow, Teheran or Washington.

Yet, if Erdoğan loses the electoral momentum generated by Afrin, he risks not only defeat in November 2019 but the prospect of some of his more febrile supporters turning their frustrations against his domestic opponents.

Picture credit: By Kremlin.ru via Wikimedia Commons accessed on March 8, 2018

More in this category: « Social Democracy - The Way Out of Turkey's Impasse? Living on Different Planets: Washington, Ankara and the Zarrab Case »
back to top