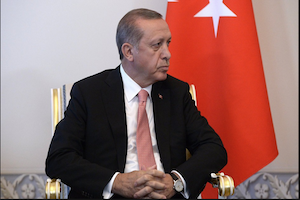 BACKGROUND: In January 2018, the Turkish government banned an announced strike by 130,000 workers at 179 separate workplaces in the country’s metal industries. Wages in the metal industry are generally low, and working conditions are often dangerous. But the government justified the ban by claiming the strike threatened “vital national security interests,” citing the vaguely worded Act 6356 of the 2012 Turkish Law on Trade Unions and Collective Labour Agreement. According to left-wing daily Evrensel, the Turkish Government routinely misuses Act 6356, in violation of ILO Convention 87 on the right to freedom of association. Banning the strike protected affected multinationals – ThyssenKrupp, Bosch, Ford, Mercedes Benz, Renault and Siemens – above the interests of local workers. Low wages and poor working conditions sustain Turkey’s “miracle” GDP growth.

The latest banned metal industries strike is highly representative of the AKP’s repressive policies vis-à-vis workers’ rights. Many sectors are even prohibited from calling a strike. These sectors include coal mining and petroleum industries, hospitals and funeral industries, urban transportation, energy and sanitation services, national defense, banking and education. For those sectors that do have the luxury of calling a strike, co-ordination among workers is highly problematic. Unions are estimated to cover a mere 8.9 per cent of the entire workforce, though the high number of non-registered workers could mean the effective ratio of the workforce covered by a collective bargaining agreement is as low as three per cent. Restrictive trade-union legislation, criticized repeatedly as contradicting international conventions on labour rights, has hindered the ability of unions to obtain legal recognition. Moreover, employers use various tactics to discourage unionisation, including intimidation, harassment and dismissals of union members.

There is a real human cost to these repressive practices. Turkey’s “economic miracle” is largely based on cheap manpower for construction, farming and textiles. In the absence of an adequate regulatory environment, these industries are rife with dangers, and sometimes fatally so. Turkey has the highest rate of workers death in Europe, and one of the highest in the world. A total of 2,006 workers were killed in workplace accidents in 2017, according to a report by the Workers’ Health and Work Safety Assembly (İSİGM), though the İnşaat İşçileri (Construction Workers) trade union claims this figure was approximately 30 percent higher, once the deaths of unregistered workers were taken into account.

Worker deaths asides, compared to other OECD countries, wages and working conditions in Turkey are generally poor. In a recent poll carried out by the Ipsos research company, some 54 percent of all workers said they were “struggling to make ends meet.” According to the same survey, 17 percent of employees are paid under 1,000 Turkish Liras per month, much lower than the country’s minimum wage of 1,603 liras, while 18 percent of all Turkish workers are uninsured. The average number of weekly working hours in OECD countries is 40.4, but around 49 in Turkey. 24 percent of all Turkish workers said they did not use any annual leave. 44 percent of Turkish workers believe their work health and safety conditions are poor – unsurprising considering the high death rate among workers. Meanwhile, the workforce includes some two million children, many of them impoverished and unregistered.

Even workers in supposedly “elite” white collar professions feel overworked, underpaid and overstressed. Working long six-day weeks is widespread and commonplace. The infamous Law 4857 denies employees the right to take even a single day of holiday in their first year at a company.

Despite President Recep Tayyip Erdoğan’s success in branding himself as a “man of the people,” the evidence to support this election-winning accolade is highly questionable, as the above examples amply indicate. The ruling Justice and Development Party’s (AKP) pro-business and anti-worker policies continue to punish the same ordinary, hard-working people who vote for him. While Erdoğan expends a good deal of energy boosting his popularity and “man of the people” credentials by railing against the “imperialist” west, his pro-business economic policies frequently indicate an indifference towards lower-income groups in his own society, even though lower-income groups are part of his core constituency.

IMPLICATIONS: The nominally “social democratic” opposition party, the Republican People’s Party (CHP), does not show any serious interest for everyday economic and labour issues. The CHP leadership has been reluctant to speak out against the widespread labour injustice. Nothing of any real significance was said when the government banned the metal industries strike. When the centre-left daily Cumhuriyet reported that 400 workers had died building Istanbul’s new international airport, the CHP parliamentarian and labour activist Veli Ağbaba requested an investigation in parliament, but the party leader, Kemal Kılıçdaroğlu, kept quiet, despite evidence that the AKP is basically trying to cover up a terrible tragedy. The message is clear: the higher echelons of the CHP are as staunchly “pro-business” as the AKP. The focus of the CHP is to combat the lack of democracy and government corruption.

In 2016, party leader Kılıçdaroğlu stated that “We need a fourth revolution; we need a liberal democracy revolution.” However, the masses are not rallying to the CHP’s liberal revolution. Kılıçdaroğlu’s speech serves as a good example as to why the CHP is failing to broaden its voter base.  Many voters, who feel the strain of the AKP’s liberal economic policies, would be more likely to heed a political message about enhanced social protections and better working conditions.

If Kılıçdaroğlu’s primary attack line is “we will bring more democracy”, his second attack line is “we will eradicate corruption”. In ordinary circumstances, accusing the government of high-level corruption should seriously weaken the government’s credibility, especially when the accusations hit the highest government circles. The latest revelations showed the Erdoğan clan moving money to an off-shore company called Bellway Limited. But Erdoğan supporters have proven remarkably indifferent to their president’s shadier financial dealings. As with the “democracy” attack line, the CHP’s tendency to focus on governmental corruption, although admirable, does not touch the struggles of ordinary people. Despite harsh realities, there seems to be a prevailing sense among AKP voters that the government has given far more than it has taken.

The CHP needs to challenge the AKP’s reputation as a “steady hand” on the economy and provide a positive social democratic alternative to the neoliberal orthodoxies that have dominated Turkish politics since the 1980s. According to CIA Factbook, the percentage of the population living below the poverty line has dramatically risen since 2010, from 16.9 to 21.9 percent. This also means there are more  people living below the poverty line in today’s Turkey (21.9 percent) than there were before the AKP came to power in 2002 (18 percent). These figures alone must cast some doubt on the AKP’s liberal optimism that a “rising tide lifts all boats” regarding GDP growth. As the country experiences a spike in living costs, rising inflation, devaluing currency, deepening inequality, crony-capitalist-style corruption and stagnant wages, to say nothing of the aforementioned labour issues, tapping a deep well of discontent should be a relatively simple procedure.

Challenging the AKP’s neoliberal outlook could also serve the purpose of reframing the political discourse. In “The Making of Neoliberal Turkey,”  Cenk Özbay suggests that the left-right meta-narratives in the pre-1980 period “got fragmented to include identity issues, culture and lifestyle choices as the new bases for politics.” The new politics “emphasized identities: Islamist, Kurdish, secularist/Kemalist, and of course Turkish nationalist.” In light of high levels of polarization, Turkey needs to move away from such issues to focus on shared economic concerns that transcend race and religion. A coalition of lower- and middle-income groups united under the common banner of promoting social democracy and improving working conditions could prove an effective election strategy. Turkish voters have already proven themselves willing to cross party lines to vote on specific issues. Many white- and blue-collar workers in big cities voted together against the April 2016 constitutional changes, according to research conducted by market research company IPSOS.

Voices are now being raised within the CHP for a social democratic reorientation of the party. Ahead of the party’s last congress, in February 2018, two leading CHP lawmakers, İlhan Cihaner and Selin Sayek Böke, called on the party to stop cowing to neo-liberalism and start pushing a “class-based, pro-labor and unequivocally leftist politics.” Their new road map has already received significant support from various groups. As Halil Karaveli points out, this call to “change the system” is “something no mainstream leftist has suggested since the social democrat leader Bülent Ecevit in the 1970s”.

Thomas Helm is an Istanbul-based writer and journalist. He currently works for the Turkish daily Hurriyet Daily News. Previously he worked for the Spanish daily La Vanguardia the International Service of Human rights (a UN-focused NGO) and the Indian daily Kashmir Observer.

Picture credit: By Kremlin.ru via Wikimedia Commons accessed on April 16, 2018

More in this category: « Turkey's Emergency Election: The Primacy of Raison d'etat Momentum, Societal Militarization and Erdoğan's Forever Wars »
back to top