Turkey's Purchase and the Path to a Post-American Alliance Architecture

Turkey's taking delivery of the Russian S-400 air and missile defense system in July 2019 is a momentous strategic step. It reflects the realignment of Ankara's interests away from Washington and toward Moscow. Washington's planned punitive measures could precipitate Turkey’s exit from the NATO alliance. Unless concessions are forthcoming from the U.S. to induce Turkey to reciprocate by finding a face-saving way out of installing the S-400 system, a strategic divorce may not be averted. 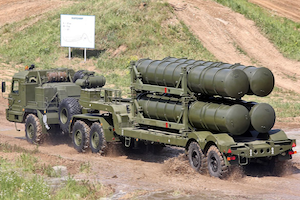 BACKGROUND: When now President Recep Tayyip Erdoğan first assumed office as Turkey's prime minister in 2003, he established a new defense procurement policy requiring Turkey to shift to an indigenous production model for its defense systems.  Yet, Turkey's need for a permanent air and missile defense system was deemed so vital and pressing that Erdoğan consented to purchasing a system from a foreign supplier.   Ankara issued a tender in 2009 for bids from foreign manufacturers to supply Turkey's Long-Range Air and Missile Defense System (T-LORAMIDS). The call issued by Turkey's procurement authority, the Undersecretariat for Defense Industries (SSM), vaguely required participation from Turkey's defense industry. After some deadline extensions, SSM received four proposals by 2011: the U.S. Patriot system, the Russian S-300V system, the Chinese HQ-9 system, and the Franco-Italian SAMP/T system.

Displeased with all the proposals, Erdoğan in 2013 commissioned an indigenous T-LORAMIDS project.  But instead of scrapping the existing T-LORAMIDS competition, the candidates were asked to revise their offers to include a framework for technology transfer that would enable Turkish manufacturers eventually to develop their own advanced systems. Turkey selected China’s HQ-9 system manufactured by China Precision Machinery Export Import Corporation (CPMIEC), which was perceived as having conformed to the technology transfer requirement.

The selection of China's HQ-9 system was met by the same kind of negative reactions from the U.S. and NATO that Turkey's impending S-400 acquisition is currently facing.

While the decision was ostensibly made on CPMIEC's promise of technology transfer, Turkey's provisional acceptance of China's HQ-9 system occurred during Ankara's efforts to mend  relations with Beijing following Erdoğan's 2009 declaration that China's suppression of the July 'riots' in Xinjiang were "a kind of genocide" of its Turkic Muslim Uighur minority. Also, as Turkey's NATO allies increasingly voiced concern about its authoritarian drift, Ankara tried to position itself as a reliable and strategic partner for China's Belt and Road Initiative.

A show-down with the U.S. and NATO over Turkey's HQ-9 purchase was ultimately averted in November 2015 when Turkey formally cancelled the $3.4 billion contract it had provisionally awarded to CPMIEC. The troubled deal ostensibly collapsed over China's refusal to provide Turkey with the technical knowledge that would enable Turkey to replicate the HQ-9 system.

IMPLICATIONS:  Ankara's cancelation of its HQ-9 purchase did not mend the growing rift in relations between the U.S. and Turkey, as the U.S. continued to deepen its military partnership with the Syrian Kurdish People's Protection Units (YPG), enhancing the capabilities of a military force that Ankara regards as an existential threat due to its affiliation with Turkey's outlawed Workers' Party of Kurdistan (PKK).

Displeased with Washington’s pro-Kurdish policies in Syria, Ankara moved closer to Moscow, and in a major energy policy turn-around agreed on December 1, 2014, to the construction of the Turkstream pipeline to transport Russian natural gas to Turkey via the Black Sea.

In contrast to the U.S. position on the T-LORAMIDS, France and Italy took the initiative and offered attractive terms to Turkey.  In January 2014, President François Hollande conducted a state visit, the first French state visit to Turkey in 22 years, to undermine the Chinese contract. Hollande’s delegation included 90 representatives from 60 companies specializing in aerospace and defense. Eurosam, owned by Franco-Italian missile maker MBDA and France's Thales, held several rounds of meetings with Turkish officials throughout 2014 to obtain the multibillion-dollar T-LORAMIDS contract.  Eurosam enticed Ankara by narrowing the price gap with the Chinese offer and especially by inviting Turkey to participate in the joint development and joint production of the next generation of the SAMP/T system capable of intercepting longer-range ballistic missiles.  As the U.S. was developing an intimate tactical partnership with the Kurdish forces in northern Syria, Turkey found the prospect of developing an indigenous production capacity for advanced missile defense technology through close cooperation with the industry's leading European manufacturers appealing.

Just three weeks before the U.S. launched its first airstrikes on ISIS positions in Kobani in direct support of the Kurdish YPG forces then Prime Minister Erdoğan indicated that Ankara would accept the Eurosam offer.  Erdoğan told reporters, "Some disagreements have emerged with China on the issues of joint production and know-how during negotiations over the missile defense system," adding that "right now our talks with France are continuing. For us, joint production is very, very important."

The American-backed YPG forces' June 2015 victory in Kobani raised the prospect that a contiguous autonomous Kurdish region would emerge along Turkey's southern border in Syria.

In response, President Erdoğan put Washington and the world on notice that Turkey would oppose this development by any means necessary. On June 27, 2015, Erdoğan declared, “I am appealing to the whole world. We will never allow the establishment of a [Kurdish] state in Syria’s north and our south. We will continue our fight in this regard no matter what it costs.”

Russia's late September 2015 military intervention in Syria did not narrow the gap between Ankara and Washington, and ultimately widened it.  The Netherlands removed their Patriot systems from Turkey in January 2015 and Germany followed suit in August 2015.  On October 8, 2015, two weeks after the onset of Russia's Syria intervention, Ankara officially appealed to Washington to keep its Patriot systems in Turkey despite the expiration of their mandated term.  The U.S. refused and began removing the system in October 2015.

As an important goodwill gesture that aided Eurosam's T-LORAMIDS bid, Italy deployed a SAMP/T battery in Turkey in June 2016, under NATO auspices, to compensate for the withdrawal of the Patriot systems.  Following long negotiations, Turkey, France, and Italy had arrived at a framework agreement in 2017, resulting in the January 2018 awarding of a contract to Eurosam and its new Turkish partners Aselsan and Roketsan to study the development and production of a SAMP/T system for a long-range air and missile defense system to be deployed in Turkey in the mid-2020s.

Yet despite meeting its goals of acquiring a future indigenous manufacturing capability, Turkey still faced an urgent need to fill the immediate operational gap in its air and missile defense capabilities left by the cancellation of the Chinese contract.  As the worsening climate of mistrust between Ankara and Washington continued in 2016, Turkey and Russia initiated a process of rapprochement.  Russian President Vladimir Putin's unstinting support for President Erdoğan following the failed July 15, 2016 coup attempt in Turkey resulted in a tectonic shift in relations between Ankara and Moscow.  Three weeks after the coup attempt, Erdoğan travelled to St. Petersburg for an August 9, 2016 clear-the air-summit in which Putin apparently floated an offer to supply Turkey with its S-400 air defense system.  By early October 2016, Ankara was publicly waiting to receive the terms of Russia's formal offer.

The timing of Turkey's turn-around on the purchasing of the Russian system seems to indicate some form of quid-pro-quo with Russia, as Moscow acceded to Turkey's launching of its Operation Euphrates Shield in northern Syria on August 24, 2016.  Resulting in Turkey's capture of the strategically located town of Jarabulus, the seven-month operation thwarted Kurdish efforts to create a contiguous territory west of the Euphrates.  On February 22, 2017, about a month before the conclusion of Operation Euphrates Shield, Turkish Defense Minister Fikri Işık announced that Turkey would purchase the S-400 system.

The Russian S-400 system is expected to be operational on Turkish soil in October 2019. The United States regards it as incompatible with NATO systems and posing a special danger for the F-35 stealth fighter, the next mainstay of U.S. airpower.

On September 12, 2017 Erdoğan announced the over $2 billion contract with Russia had been signed.  Twenty days after the contract went into effect, on January 20, 2018, Turkey launched a second military operation into northern Syria, Operation Olive Branch, with Russian acquiescence.

CONCLUSIONS: The realignment of Ankara's interests away from Washington and toward Moscow was precipitated by the respective American and Russian positions towards Turkey's interests in Syria. U.S. President Donald Trump's backtracking on his December 19, 2018 announcement of a complete U.S. withdrawal from Syria and his January 13, 2019 threat to "devastate Turkey economically if they hit the Kurds" reinforced the contours of the realignment during a potential reset opportunity for Turkey-U.S. relations.

Turkey may face U.S. sanctions under the under the Countering America's Adversaries Through Sanctions Act and the cancelation of its participation in the F-35 program. Since joining the program in 2002, Turkey has invested over $1.25 billion and became part of the F-35 supply chain by manufacturing parts for the aircraft and providing services. Expulsion from the F-35 program and sanctions against Turkish defense companies would result in multi-billion dollar losses for Turkey’s defense industries. Sanctions may preclude Aselsan and Roketsan from participating in the SAMP/T system and would likely stymie Turkey's production and lucrative export of the T129 attack helicopter whose engines are produced by a joint-venture of U.S. and U.K. firms.

Such punitive measures would have drastic consequences: they would seal the divorce of Ankara and Washington, possibly even precipitating Turkey's formal exit from NATO. Unless concessions are forthcoming from the U.S. to induce Turkey to reciprocate by finding a face-saving way out of installing the S-400 system, such as sending it to Azerbaijan, a strategic divorce may not be averted.  Although Ankara will seek to salvage its cooperation with European partners, Turkey will be on the path to joining a post-American alliance architecture.

Dr. Micha’el Tanchum is a Fellow at the Truman Research Institute for the Advancement of Peace, Hebrew University and an affiliated scholar with the Centre for Strategic Studies at Başkent University in Ankara, Turkey (Başkent-SAM).  Follow @michaeltanchum

More in this category: « A Dangerous Policy of Turkish Containment in the Eastern Mediterranean Defying Denial: Turkey's Kurds and the March 31 Local Elections »
back to top