BACKGROUND: After the general elections that were held in Iraq in March 2010, Turkey actively sought to influence the formation of a new Iraqi government, supporting Iyad Allawi as new prime minister. However, these efforts failed and Nouri al Maliki came to lead the new government. Turkey’s failed attempt to interfere in Iraqi politics strained its relations with Baghdad, and these deteriorated further when Iraqi vice president Tareq al-Hashimi fled to Turkey to escape prosecution and was granted asylum. The political crisis between Baghdad and Ankara has had economic consequences, as Turkish companies have encountered hurdles when trying to conduct business in those areas of Iraq over which the central government exercises direct control. But the most important consequence has been that Turkey has developed its relationship with the Kurdistan Regional Government (KRG) in northern Iraq.

As tensions mounted between Ankara and Baghdad, the Turkish government endeavored to develop the economic and political ties with the KRG. Turkey has been hugely successful. On November 16, Massoud Barzani, the head of the KRG, arrived in Diyarbakir – the main Kurdish city in Turkey – on a historical visit and held talks with Turkish Prime Minister Recep Tayyip Erdoğan. The historical visit of Barzani, during which Erdoğan became the first Turkish prime minister to publicly refer to “Kurdistan”, is a vivid demonstration of how far relations between Ankara and Erbil, the capital of KRG, have evolved in only a few years.

The “alliance” between Erdoğan and Barzani has huge political implications: by endorsing Barzani, Erdoğan demonstrates the intention of the Turkish government to “bypass” Abdullah Öcalan, the imprisoned leader of the Kurdistan Workers’ Party (PKK).  And most importantly, the relationship between Ankara and Erbil is sustained by mutual economic interests. The KRG has become a haven for Turkish exports; the value of Turkey’s exports to Iraq in 2013 amounts to US$ 12.5 billion, of which the area of the KRG accounts for 9.5 billion. But the real game changer has been the discovery of huge reserves of oil within the area that is under the control of KRG.

The International Energy Agency (IEA) estimates that Iraq is going to account for as much as 45 percent of the increase of the global oil production until 2035; in terms of daily production, the Iraqi contribution is expected to amount to 9 to 10 million barrels of oil per day, and the territory of the KRG is home to around a third of that production capacity. Turkish oil companies are busy exploring the new opportunities in the Erbil-controlled area of Iraq.

Turkey is conducting talks with the KRG regarding oil and gas exploration and the transport of oil and gas. Indeed, these negotiations is one very important reason why the relations between Ankara and Baghdad have deteriorated, since the Iraqi regime correctly sees this as a development that will further loosen its already tenuous hold over the Kurdish north of the country.

The KRG is clearly inclined to develop its ties with Turkey, as this offers a promise of emancipating itself from the authoritarian regime in Baghdad. However, the energy relationship between Erbil and Ankara cannot be developed without taking into account the interests of Baghdad as well. The new oil game in Mesopotamia is inevitably going to have three participants.

Indeed, the recognition of this fact helps to explain why Turkey is now seeking to re-engage with Iraq; ministerial contacts with Baghdad have been reestablished, and Iraqi Prime Minister Nouri al-Maliki is due to visit Turkey in the near future. Turkey’s attempt to reconnect with Iraq must of course also be seen against the backdrop of the setbacks that Turkey has had in Syria; events both in Syria – where the hopes of regime change that Turkey had entertained have failed to materialize – and in Egypt – where AKP’s ally, the Muslim Brotherhood regime, was ousted – have had a sobering effect on Ankara. Turkey is now trying to resuscitate its old neighborhood policy. 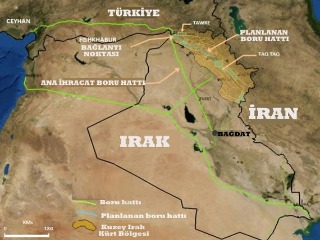 IMPLICATIONS: In terms of petro-politics, Ankara cannot disregard Baghdad. At the heart of the new oil game in Mesopotamia is the question of how the oil from KRG territory is going to be transported to world markets. Another major issue of contention between the KRG and the central government in Baghdad that calls for a resolution is how the earnings of the oil export are going to be partitioned in the future.

Turkey is looking forward to establishing itself as a major regional oil hub, but there are logistical and political hurdles that first need to be overcome.

At present, the oil that is produced in KRG-controlled areas is transported to Turkey in tankers; with the rapid increase of production, that cannot continue. As of 2014, production will reach three hundred thousand barrels per day. At such levels of production, the existing pipeline between Kirkuk in Iraq and Ceyhan on the Mediterranean coast of Turkey needs to be used. The Kirkuk-Ceyhan pipeline can carry 1.5 million barrels of oil per day, and the pipeline is presently underutilized as Baghdad is not pumping oil on full capacity; currently the pipeline runs on only a third of its capacity. But the central government in Baghdad has so far not been willing to let the Kurds in the north make use of the unused capacity of the pipeline.

During the last two months, talks that have been conducted between Ankara and Baghdad, and the Turkish and Iraqi interlocutors, are reported to have addressed the question of additional pipelines. Because even if Baghdad were to give up its opposition to letting the KRG fill the unused capacity of the Kirkuk-Ceyhan pipeline, that would only be a temporary solution. Already by 2017-2018, the daily production of oil in the KRG-controlled area is expected to exceed one million barrels per day, which will require the building of additional pipelines to Turkey. Turkish representatives have also been conducting talks with the KRG about this matter.

CONCLUSIONS: Petro-politics fuels the evolving relationship between Ankara, Erbil and Baghdad. In all probability, the negotiations between the three parties are going to yield the result that the oil of Iraqi Kurdistan will be carried to world markets through the Kirkuk-Ceyhan pipeline.  Overcoming the opposition of Baghdad to the construction of two new pipelines to carry the Kurdish oil to Turkey is in all likelihood going to prove more difficult. But as the oil starts to flow to Ceyhan, and as oil production in the area of the KRG continues to increase, straining the capacity of the pipeline, the pressure on Baghdad to go along with the construction of new pipelines from Iraqi Kurdistan to Turkey is inevitably going to mount.

Turkey’s strategic position – and its economy – is set to be strengthened as it taps into the oil riches of Iraqi Kurdistan and gradually realizes its ambition to be a major energy hub. And as the economic integration between Turkey and the Iraqi Kurdistan proceeds, Ankara is set not only to reap economic benefits: The partnership with the KRG – most vividly illustrated by the historical visit of the KRG head Barzani to Diyarbakir – is also going to make it possible for Turkey to take more courageous steps in its Kurdish opening. As Iraqi Kurdistan prospers, the pressure of the Iraqi Kurds on the PKK is going to mount; a prosperous Iraqi Kurdistan is not going to tolerate developments that could jeopardize its economic gains and development.

Turkey also has an interest in playing the new oil game in Mesopotamia in a way that factors in the considerations of the central government in Iraq. After what happened in Egypt and Syria, reestablishing the relationship with Iraq has become strategically crucial for Turkey. It may not be realistic to expect that relations with Baghdad are going to get dramatically better in the short term, but enjoying good relations with Baghdad is nonetheless something that is bound to strengthen Ankara as a regional actor. And the Turkish re-engagement with Shiite-led Iraq is going to contribute to the stability of Iraq.

More in this category: « Erdogan and the Challenge of Coping with Change Good Kurd, Bad Kurd: The AKP’s Rapprochment with the KRG »
back to top