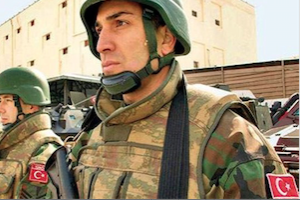 BACKGROUND: In his victory speech on the evening of November 1, Prime Minister Ahmet Davutoğlu promised that his government would to put an end to the tensions and polarization that had wrecked Turkish society in the months preceding the election. “We shall embrace everyone,” Davutoğlu declared. “We have come to sow the seeds of love.” But the actions over the following weeks of both Davutoğlu’s government and President Recep Tayyip Erdoğan suggest otherwise.

Since November 1, the AKP’s campaign against the exiled Islamic preacher Fethullah Gülen has been intensified and broadened. Rather than focusing on those of Gülen’s followers who engaged in genuine criminal activity or abuse of power – such as the members of the police and judiciary responsible for the notorious Ergenekon and Balyoz investigations – pro-AKP prosecutors are now targeting journalists, businesspeople and academics who appear to be guilty of little more than sympathy for Gülen’s publicly expressed calls for moderation, non-violence and interfaith dialogue.

The vendetta against the Gülen Movement forms part of the AKP’s broader suppression of perceived opposition or dissent. Since the beginning of 2015, over 100 people have been taken into custody on charges of “insulting” the president, more than the combined total for all of Erdoğan’s predecessors in office. Journalists have continued to be jailed or forced from their jobs. On November 26 Can Dündar and Erdem Gül, the editor-in-chief and Ankara representative respectively of the daily Cumhuriyet, were formally arrested for publishing details of Turkish arms supplies to rebel groups in Syria – supplies that were first denied and then admitted by the Turkish government. Their detention took the number of journalists currently being held in Turkish prisons to 30.

Yet the AKP has continued to maintain that it is the victim rather than the victimizer, claiming that both the journalists and the Gülen Movement are part of a vast international conspiracy with its roots in the West that is striving to prevent Turkey’s otherwise inexorable rise to greatness under Erdoğan’s leadership.

Most dangerous has been the AKP’s continuation of its hard-line policy on the Kurdish issue. Both publicly and privately AKP officials insist that there can be no return to the dialogue with imprisoned Kurdistan Workers’ Party (PKK) founder Abdullah Öcalan – which was abrogated by Erdoğan in March 2015 – unless the organization first “lays down its weapons and buries them in concrete.” In fact, Erdogan and the AKP currently appear confident that a dialogue is unnecessary and that they can impose a solution on the Kurdish issue by military means.

The winter weather has meant that the focus of the war against the PKK has now shifted to the towns and cities of southeast Turkey, where young PKK sympathizers, known as the Patriotic Revolutionary Youth – Movement (YDG-H), have been trying to establish no-go areas in residential districts. The AKP has responded with curfews and military assaults that have resulted in numerous non-combatant casualties, many of which are going unreported in the mainstream Turkish media. Even if the security forces are eventually able to use their superior firepower to reassert state control, the long-terms costs are likely to be high. Some of the residents in the areas affected are undoubtedly resentful of the YDG-H for bringing the conflict into their neighborhoods. But this resentment pales in comparison with the increase in anger and alienation towards the Turkish state, not only in the areas directly affected but throughout the southeast. In addition, past experience suggests that the death of each non-combatant or YDG-H member will result in dozens of new recruits for the PKK.

Indeed, the AKP regime appears unaware that ultimately the Kurdish issue is going to be resolved not on the battlefield but in the minds of the country’s Kurds. Many Kurdish nationalists believe that the AKP allowed Islamic State sympathizers to carry out the bombings in Diyarbakır, Suruç and Ankara in June, July and October 2015 that left 140 Kurds and leftists dead and hundreds more injured. This perception was reinforced during the campaign for the November 1 election, when Davutoğlu declared that anything other than a victory for the AKP would result in a return of the state-sponsored death squads that terrorized the southeast in the early 1990s. Ironically, the fact that there have been no more Islamic State attacks against Kurds and leftists since the election has merely strengthened the perception that the regime can turn the bombings on and off at will – while any new attack will be interpreted as demonstrating that the AKP has started again.

On November 28 the internationally respected human rights lawyer and chair of the Diyarbakır Bar Association Tahir Elçi was killed by a shot to the back of the neck after delivering a press statement to journalists in Diyarbakır calling for an end to the recent upsurge in violence. On October 14, during an appearance on national television, Elçi had said that, even though it had engaged in acts of terrorism, the PKK was also a political movement with a broad social support base. Elçi’s statement triggered a storm of protests – including death threats – from AKP supporters and pro-government prosecutors initiated a criminal investigation. The full circumstances of Elçi’s death remain unclear. However, the nature of the mortal wound and the dilatory and often shambolic manner in which the investigation into the killing has been conducted – including the failure to collect forensic evidence, interview key witnesses or conduct comprehensive ballistics tests – have deepened the conviction of many Kurds that Elçi was the victim of a state-sponsored assassination.

IMPLICATIONS: The AKP’s inability to understand the consequences of its actions can also be seen in the two new crises that have emerged – both of them in foreign policy – since the November 1 election.

In mid-November 2015, backed by Russian air strikes, Syrian government forces launched an offensive against rebel-held territory in the western province of Latakia, close to the border with Turkey. The rebel forces targeted included radical groups such as the al-Qaeda affiliate Jabhat al-Nusra and units drawn from Syria’s small Turkish-speaking Turkmen minority. On November 19 the Turkish media reported that Russian warplanes had inflicted heavy casualties on the Turkmen militia, including killing one of its commanders. On November 20 the Russian ambassador to Turkey was summoned to the Ministry for Foreign Affairs in Ankara and told to halt the military operation in Latakia. On November 22 the commander of one of the Jabhat al-Nusra units in Latakia posted a video on the internet calling on “all Muslims” to rally to their support against the Russian air strikes. On November 24, after receiving an order from Ankara to fire on any unauthorized aircraft that entered Turkish air space from Syria, a Turkish F-16 shot down a Russian SU-24 after it apparently briefly crossed the border while conducting air strikes in Latakia.

Following a furious protest from Moscow, both Erdoğan and Davutoğlu claimed that Turkey had the right under international law to shoot down any aircraft that violated its air space. This is true. But it does not explain why this right had not been exercised before, not least in response to what Ankara claims are repeated violations of its air space by Greek warplanes over the Aegean. Indeed, in 2012 when a Turkish F-4 was downed after entering Syrian air space, the Turkish government fiercely condemned the government in Damascus, arguing that having the legal right to shoot was no excuse for doing so. Extraordinarily, despite the AKP’s accusations that the West is constantly conspiring to undermine it, it was to NATO that the AKP turned for protection and expressions of support as soon as it feared that Moscow might retaliate for the downing of the SU-24.

Far from scaling back its air operations in Syria, since the downing of the SU-24, Moscow has intensified them, including targeting aid convoys from Turkey in northern Syria. On the ground in Latakia, the Turkmen militia has lost control of several key villages and their inhabitants have fled across the border to Turkey. Turkish warplanes have also withdrawn from U.S.-led air missions against Islamic State positions in Syria for fear of being targeted by Russian planes. In addition to the economic sanctions already announced by Moscow, the AKP regime now also faces the possibility of covert measures – not least as the result of closer relations between Russia and both the PKK and its Syrian ideological affiliate, the Democratic Union Party (PYD).

Nevertheless, on December 4, Turkey dispatched a 400-strong commando battalion and 25 M-60 A3 tanks to the Bashiqa area of Iraq, just north of the city of Mosul. Another 350 Turkish troops were deployed at the Turkish-Iraqi border ready to join them. The news prompted a furious protest from the central Iraqi government in Baghdad, which described the uninvited deployment as a violation of its sovereignty and called for their immediate withdrawal. Erdoğan refused. AKP officials disingenuously claimed that the troops were needed to protect the 80 members of the Turkish special forces, together with approximately 100 Turkish security and support personnel, who have been providing training to the Iraqi Kurdish militia, the Peshmerga, in Bashiqa since 2014. In reality, the deployment appears to have been an attempt by Turkey both to assert its claim to be a regional playmaker in the face of the increased involvement of Russia and Iran in Syria and Iraq and to support Iraqi’s Sunni minority against the authority of the Shia-dominated central government.

But, as with the downing of the SU-24, the AKP seriously miscalculated. On December 6, Davutoğlu announced that no more Turkish forces would be deployed without the explicit approval of Baghdad. On December 14 Turkey began to withdraw some of its troops from Bashiqa.

CONCLUSIONS: In recent weeks, the abrupt authoritarianism and instinctive recourse to brute force – rather than attempting to resolve issues through dialogue and engagement – that have come to characterize the AKP’s domestic policies have also started to appear in its foreign policy. Indeed, the continuing deinstitutionalization of decision-making and the concentration of ever more political power in Erdoğan’s hands have been accompanied by a growing convergence between the nature of government policy and Erdoğan’s own impulsive, impatient and confrontational personality.

This would be worrying enough in itself but has been made particularly dangerous by what appears to be the government’s increasing inability to understand the consequences of its actions – which are not only producing unnecessary tensions and crises but manifestly failing in their objectives. Similarly, far from browbeating the Kurds into submissive obedience to the central government, the hard-line policy that is currently being implemented in the southeast is merely heightening the sense of alienation and exclusion and further fueling the desire for a loosening of ties with Ankara, whether through devolution or eventually even full independence.

More in this category: « Do Russian-Turkish Energy Relations Have a Future? Turkey does not want to be left out of the Trans-Atlantic community »
back to top