The Gezi Park Verdicts and the Allure of Delusion

The convictions on April 25, 2022, of eight Turkish nationals accused of orchestrating the 2013 Gezi Park Protests have again demonstrated how dependent President Recep Tayyip Erdoğan has now become on claimed achievements in an imagined world to try to offset his failures in the real one. 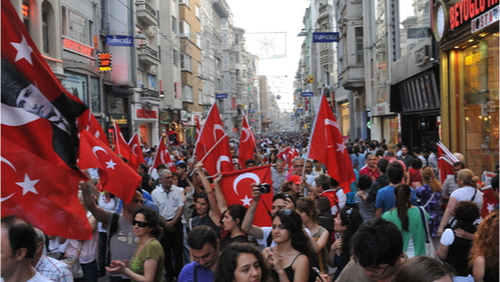 BACKGROUND: In September 2011, the Istanbul Metropolitan Municipality (İBB), which at the time was run by Erdoğan’s Justice and Development Party (AKP), announced plans to redevelop the area around the Istanbul’s iconic Taksim Square, including rebuilding the Ottoman Halit Paşa Topçu Barracks on the adjacent Gezi Park, one of the few green spaces in the centre of the city. A loose alliance of NGOs formed what became known as “Taksim Solidarity” to coordinate efforts to oppose the İBB’s plans, such as through challenges in the courts and the release of press statements.

In April 2013, Erdoğan announced that the rebuilt barracks would house luxury residences and a shopping mall and would be built regardless of any court ruling on its legality. The project encapsulated several of the characteristics that had already come to define Erdoğan’s rule, namely: a disregard for the law, commercialism, and a predilection for vainglorious megaprojects. But there were also clear ideological overtones.

Erdoğan’s nostalgia for a largely imagined Ottoman past has become particularly focused on Abdülhamit II (reign 1876-1909), who is exalted as trying to defend – in his roles as sultan and caliph – the empire and Islam against plots by scheming Westerners and treacherous fifth columns amongst the ranks of his subjects.

Soldiers from Halit Paşa Topçu Barracks played a key role in what has become known as “March 31, 1909, Uprising”, an unsuccessful counterrevolution against the Young Turk regime, which had seized power the previous year. Although its causes were more complex, and those who participated in the uprising more diverse, the uprising – which appears to have had the support of Abdülhamit – tends today to be regarded by both hard-line secularists and Islamists as a power struggle between conservatives and “Westernizers”. The uprising was eventually suppressed. The Halit Paşa Topçu Barracks were so badly damaged during the fighting that they became derelict. They were eventually demolished in the 1940s during the re-landscaping of the entire Taksim area – which included the creation of Gezi Park -- in an attempt to make it more closely resemble the centre of a European city.

However, although ideology and competing historical narratives shaped the context in which they arose, the Gezi Park Protests that swept Turkey from late May 2013 onwards were primarily the product of the eruption of accumulated social tensions created by Erdogan’s increasingly repressive policies – with the trigger being simple public outrage at the brutal violence with which the police targeted a handful peaceful protestors in Gezi Park, only some of whom were associated with Taksim Solidarity. The result was the first spontaneous bottom-up mass protests in Turkish history, in which at least 3.5 million people are believed to have taken to the streets across the country.

As anyone who attended the protests – whether as a participant or an observer – can attest, there was no central coordination. Not only did the protests bring together individuals from diverse backgrounds, but for the vast majority of the participants – many of whom were very young – the protests were their first experience of political activity. After the police were forced to withdraw from Taksim on June 1, 2013, there were some attempts – including by members of Taksim Solidarity – to harness the energy of the protestors and create mechanisms of cooperation. But the emphasis was on the local, rather than the national – as individuals gathered to discuss ways of improving life in their own neighborhoods rather than toppling the Erdoğan-led government in Ankara.

Within two weeks, the police had reasserted control over the Taksim area and repeatedly used plastic bullets, baton charges, beatings, water cannon, tear gas and pepper spray to break up other demonstrations and protests. With the participants battered and wearied by the police violence, and without leadership or a strategy for what to do next, through late summer and fall 2013 the protests gradually petered out.

Erdoğan responded to the Gezi Park Protests by abandoning his already ailing attempts to broaden his political support base and sought instead to deepen it, including through repeated recourse to conspiracy theories in which anti-Islamic Westerners – aided by fifth columnists masquerading as his critics and opponents – were constantly scheming to undermine him and prevent Turkey’s otherwise inexorable rise to pre-eminence under his leadership. For Erdoğan, such conspiracy theories appear to meet a psychological as well as a political need. They are not only implicitly self-aggrandizing but divert responsibility for setbacks and failures away from his own shortcomings. While his continued retention of power can be presented both to himself and his followers as a triumph, a demonstration of his ability to defy the machinations of even the most formidable of foreign foes.

IMPLICATIONS: A judicial investigation to try to discover an international conspiracy behind the Gezi Park Protests began in summer 2013, while people were still taking to the streets. But the indictment in the case was not completed until early 2019. It named 16 defendants. They were headed by the philanthropist Osman Kavala, who was accused of using Taksim Solidarity to coordinate attempts to overthrow the elected government.

The Gezi Park indictment follows the template created by the notorious Ergenekon investigation of the late 2000s and early 2010s. It is prodigiously long at 657 pages, suffused with absurd conspiracy theories, contains numerous factual errors, is largely comprised of the transcripts of tapped telephone conversations and produces no evidence of wrongdoing against any of the defendants. The Ergenekon indictments claimed the existence of a single hierarchical organization that was allegedly responsible for every act of domestic political violence over the previous 20 years. The Gezi Park indictment claims the existence of centrally coordinated conspiracies by what are now known as the Open Society Foundations of George Soros to foment uprisings to overthrow elected governments, starting in Serbia at the turn of the millennium and then extending through the former Eastern Bloc and the so-called “Arab Spring” to the Gezi Park Protests.

Although the defendants were supportive of the Gezi Park Protests, the accusation that they were as part of a foreign conspiracy to overthrow Erdoğan is manifestly absurd. In addition, the trial has been marred by numerous flagrant abuses of Turkish law and due process. For example, Kavala – who, arguably even more absurdly, has also been accused of involvement in the still largely unexplained failed coup attempt of July 2016 – has been held in detention since October 2017, despite a ruling by the European Court of Human Rights (ECHR) for his release. This is a violation of the commitment that Turkey itself gave as a member of the Council of Europe to honor rulings by the ECHR. Yet the absurdities and abuses were not enough to prevent Kavala being found guilty and sentenced to life without parole, while seven of the other defendants received sentences of 18 years.

All of the convictions have been appealed. If they are upheld by both the Appeal courts and Turkey’s Constitutional Court, the case is likely to go to the ECHR, which appears certain to rule for the accused to be released. However, even if Turkey complies, the process is so long that those convicted could still potentially face many years in prison.

During the Ergenekon investigation both Turkish human rights advocates and international organizations such as Human Rights Watch and Amnesty International initially chose to ignore the egregious abuses and absurdities in the case, apparently because they disagreed with or disliked the accused. This only changed when the investigation was expanded to target the left-wing journalist Ahmet Şık, whom they regarded as being one of their own. In the Gezi Park case, this tribalism has worked in the defendants’ favor. From the outset, the plight of Kavala in particular has received widespread international publicity. This has helped protect him from the risk of the physical abuse and/or torture to which other detainees in Turkey are sometimes subjected. But Erdoğan’s aggressive reactions to foreign criticism has also made it more difficult for him to risk the potential domestic humiliation of being seen as having been forced into a climb-down and allowing Kavala and the other defendants to go free.

On April 7, 2022, a Turkish court halted the trial in absentia of 26 Saudi Arabian nationals accused of the murder in Istanbul in October 2018 of the Saudi dissident Jamal Khashoggi. Given the influence that Erdoğan is able to exercise over the judicial system, the decision can only have been made with his approval. It was a remarkable turnaround from Erdoğan’s public statements in the immediate aftermath of the killing, when he had explicitly held the Saudi regime responsible for Khashoggi’s murder and vowed to pursue the perpetrators until they were brought to justice. Erdoğan’s about-turn was clearly motivated by Turkey’s increasing need for foreign funding as, largely as a result of the failure of Erdoğan’s own policy prescriptions, the country’s economy has slid deeper into its worst crisis in a generation. On April 28, 2022, Erdoğan flew to Saudi Arabia for a two-day visit in an attempt to boost bilateral economic ties.

However, even though they allowed him to portray himself as being motivated by principle, the tensions with Saudi Arabia over the Khashoggi murder were never as central to Erdoğan’s political and psychological needs as his claims of Western conspiracies to try to overthrow him – and are thus likely to be much harder for him to abandon. Disturbingly, these conspiracies are also redolent of the anti-Semitism that informs many of the AKP’s narratives. Soros is Jewish. Kavala is regarded by Erdoğan’s supporters as being of Jewish descent. Henri Barkey, the US academic accused of conspiring with Kavala in the 2016 coup attempt it, is Jewish.

CONCLUSIONS: It debatable whether Turkey has ever been a state governed by the rule of law – or indeed, given the often draconian nature of Turkish legislation, whether this would necessarily always be a good thing. However, this does not mean – as has sometimes been claimed since the Gezi Park verdicts – that all judicial decisions are taken by the political authorities. There are still some judges who try to apply the laws on the statute book. There are also judges who, without needing to be told to do so, issue verdicts of which they believe Erdoğan would approve. But there is also no question that, when Erdoğan chooses to intervene, an instruction conveyed from the presidential palace invariably trumps the letter of the law.

Perhaps as disturbing as what it says about the Turkish legal system is what the Gezi Park case says about Erdoğan’s mindset. Western-driven conspiracies are increasingly used to explain setbacks and failures across a broad range of policy issues, while an imagined world has become the proving ground for his exalted self-image. Most dangerously, his repeated portrayal of his domestic critics and opponents as fifth columnists is a recipe for intra-communal violence and severe ruptures in Turkey’s already extremely strained social fabric.

More in this category: « New Turkey-Uzbekistan Strategic Partnership Accelerates Turkey’s Rise as a Eurasian Agenda-Setter Turkey, Ukraine and Russia: The Illusion of Neutrality »
back to top