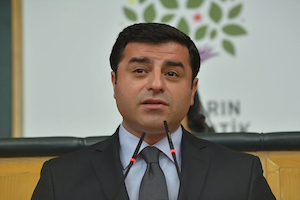 BACKGROUND: On November 20, 2019, the co-chairs of the Peoples’ Democratic Party (HDP), Turkey’s third  biggest party, Pervin Buldan and Sezai Temelli, declared that their party was not going to surrender its seats in parliament or the municipalities that it holds https://t24.com.tr/haber/hdp,848887. The leaders of the HDP, a left-wing party that is dedicated to the defense of Kurdish rights but also aspires to be a force for countrywide democratic change in Turkey, bringing together Kurdish and Turkish leftists, made their statement after mounting pressure among the party base to quit parliamentary and local politics in response to the increasingly punitive measures of the Turkish government against the elected officials of the HDP.

In the last general elections, in 2018, the HDP received 6 million votes, securing 62 seats in the Turkish Grand National Assembly. In the municipal elections on March 31, 2019, the HDP won a total of 69 municipalities, sweeping the Kurdish southeast of the country. The party carried Diyarbakır, the biggest metropolis in the Kurdish region, with 63 percent, and the major cities Van, Mardin and Hakkari with 54, 56 and 60 percent respectively. Just as important, the HDP was a key to the outcome of the election in Istanbul, where the center-right opposition alliance of the officially social democratic Republican People’s Party (CHP) and the right-wing nationalist Good Party defeated the ruling alliance of the Islamic conservative Justice and Development Party (AKP) and the far right Nationalist Movement Party (MHP). HDP supporters heeded the call of Selahattin Demirtaş, the imprisoned former co-chairman of the HDP, to vote for the CHP candidate Ekrem İmamoğlu.

In what appears to be an attempt to nip a nascent democratic alliance in its bud, the Turkish government has moved to cripple the HDP, widening the crackdown on the party which began in 2015, when it first entered the Turkish parliament and established itself as the third biggest political party in the country, a historic breakthrough by a pro-Kurdish party that shocked the Turkish state establishment. Since 2015, 16 000 elected representatives of the HDP have been detained, and 4 902 have been arrested https://t24.com.tr/haber/hdp-zor-kararin-esiginde-gitmek-mi-kalmak-mi,848388. These include former co-chairs Selahattin Demirtaş and Figen Yüksekdağ (the HDP elects one male and one female to the party leadership and as co-mayors to promote gender equality) who have been imprisoned since 2016 on terrorism charges, parliamentarians and mayors.

On August 19, 2019, the Turkish interior ministry dismissed the newly elected mayors of Diyarbakir, Van and Mardin, accusing them of having links to the Kurdistan Workers’ Party (PKK) militant group, which they deny, and appointed the local governors in their place.

On October 22, the dismissed co-mayor of Diyarbakır, Selçuk Mızraklı, and two other dismissed HDP mayors from that city, the co-mayors of the districts of Kayapınar and Kocaköy, Keziban Yılmaz and Rojda Nazlıer were arrested. Yılmaz had been elected with 66 percent and Nazlıer with 61 percent of the votes. The arrest of Mızraklı, a widely popular medical doctor who won the Diyarbakır election with 63 percent on March 31, prompted the HDP to boycott the Turkish parliament for three days, a move that party officials explained was meant to draw the attention of the main opposition party to the treatment of elected Kurdish representatives.

The response of the Turkish state spoke of what appears to be a determination to show no clemency. On October 28, Mızraklı, Yılmaz and Nazlıer were transferred from Diyarbakır to the prison in Kayseri in central Anatolia under extremely harsh conditions. Kurdish leaders are routinely imprisoned far away from their domiciles in the Kurdish region. Former HDP co-chair Demirtaş is jailed in Edirne, in the westernmost part of Turkey, 1 500 kilometers from Diyarbakir in the east, limiting the contact that his family can have with him. The arrested mayors were not informed about their destination. Handcuffed during the ten hour, non-stop journey in an armored police vehicle, they were kept in cages, and reportedly suffered from acute cramps http://www.artigercek.com/haberler/secilmis-belediye-baskanlari-10-saat-boyunca-kelepceli-sevk-edildi.  “We are treated as if we were captured enemies” protested Mızraklı in a written statement that was relayed by his attorney https://t24.com.tr/haber/selcuk-mizrakli-adalet-icin-mucadele-etmeye-cagiriyorum,847623.

By the end of November 2019, 24 out of 69 HDP mayors had been dismissed and 19 had been arrested. On November 26, 2019, Turkish police raided the premises of the HDP in Kocaeli, a city in the Marmara region in western Turkey, detaining local party officials. On November 27, 50 HDP representatives, trade union officials and representatives of the Human Rights Association IHD, were detained in police raids in Ankara, Gaziantep, Urfa, Diyarbakır, Batman, Ağrı and Adıyaman.

IMPLICATIONS: Even though the HDP remains determined to keep up its democratic struggle within the system, disenchantment is growing among the Kurdish population. In one recent survey, 13 percent of the HDP supporters said that their party ought to resign its seats in parliament.  The moral torpor of the opposition and of the Turkish public opinion in general feeds the sense of abandonment among the Kurds. The main opposition party, CHP, has declined to condemn what effectively amounts to a suspension of democracy in the Kurdish cities of the country. The CHP also voted in favor of Turkey’s military intervention in Rojava in northern Syria, further alienating the Kurds.

In a written statement from prison, Selahattin Demirtaş warned of the risk of nationalist and extremist reactions in the future from the Kurds. Demirtaş said that the opposition was mistaken in its apparent conviction that the Kurds can be taken for granted, adding that recent events, the arrests of the Kurdish mayors and the invasion of Rojava, will leave a bitter memory https://t24.com.tr/haber/demirtas-hic-kimse-bugunleri-unutmayacak-muhalefetin-yerinde-olsam-kurt-halkini-hafife-almazdim,846119.

In their statement https://t24.com.tr/haber/hdp,848887 on November 20, HDP co-chairs Pervin Buldan and Sezai Temelli remarked that the AKP-MHP regime foments nationalism and hostility to the Kurds to subjugate the opposition. Indeed, the crackdown on the HDP also serves a wider purpose, to split the opposition. It prevents a broad, cross-ethnic democratic alliance from coalescing, as the main opposition party CHP acquiesces to the oppression of the Kurds. It is safe to assume that few Kurds would heed any calls today to support CHP candidates as they did when they ensured the opposition victory in Istanbul.

Historic legacy – the CHP is the founding party of the Turkish republic – is one reason why the CHP has traditionally been unable to emancipate from the paradigm of a linguistically and culturally homogenous nation state and has been reluctant to accommodate the cultural aspirations of the Kurds. Also, the CHP fears that siding with HDP would invite punitive measures from the AKP-MHP regime. Devlet Bahçeli, the leader of the MHP, has called for the prosecution of Kemal Kılıçdaroğlu, the CHP leader for alleged “terrorist” liaisons during the municipal elections, when the CHP accepted the support of the HDP. Bahçeli recently reiterated his accusations, ominously designating Kılıçdaroğlu a threat to national security https://t24.com.tr/yazarlar/oya-baydar/kumpasi-kim-kurdu-kime-kurdu,24607.  Yet this does not justify the refusal of the CHP to make a principled stand against the crackdown on elected Kurdish representatives.

The main opposition party cannot dodge its responsibility for the erosion of Turkish democracy. Shamefully, in 2016 the CHP consented to the lifting of the immunity of parliamentarians, even though party leader Kılıçdaroğlu himself admitted that the initiative of the AKP-MHP regime was unconstitutional and even though the obvious purpose of the regime was to open for the arrests of HDP parliamentarians that followed.

CONCLUSION: The crackdown on the HDP risks wasting the opportunity that the party offered and may still offer to save Turkey’s democracy and strengthen the unity of the country. The HDP, which was founded in 2013, consciously sought to speak for the whole of Turkey, not just for its Kurdish region. In that vein, Selahattin Demirtaş entered the presidential election in 2014, and made inroads into the Turkish left-wing electorate. That was never uncontroversial. Demirtaş was rebuked by nationalist-conservative Kurds who dislike the left-wing HDP and who railed against it for not being a truly “Kurdish” party. In 2015, then co-party chair Demirtaş emphasized cross-ethnic unity in left-wing terms: “We are Kurds, Turks, Sunnis and Alevis, but above all we are poor, unemployed, workers.” Demirtaş reached out to the CHP, calling for the formation of a democratic bloc of parties that favor equality and fraternity. Demirtaş held on to his defense of the cross-ethnic approach also after Turkish military operations had ravaged cities throughout the Kurdish southeast of the country in 2015-2016, warning that it would be “a great tactical mistake if the Kurds were to isolate themselves and care only about Kurdistan.” The then HDP co-chair pointed out that the Kurds did not have the “luxury of giving up on coexistence and of returning to Kurdistan.” Yet neither, it should be clear, has Turkey the luxury of giving up on democracy for the Kurds.

Halil Karaveli is Senior Fellow with the Central Asia-Caucasus Institute & Silk Road Studies Program Joint Center and Editor of the Turkey Analyst. He is the author of Why Turkey is Authoritarian: From Atatürk to Erdogan (Pluto Press).