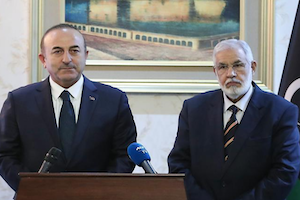 BACKGROUND: On November 27, 2019, Turkey’s President Recep Tayyip Erdoğan and Fayez al-Sarraj, who heads Libya’s Tripoli-based Government of National Accord (GNA), signed two Memoranda of Understanding on "Delimitation of Maritime Jurisdiction Areas in the Mediterranean” and “Security and Military Cooperation.” Ankara has been steadily increasing its militarily support to Tripoli against its rival Tobruk-based government whose Libyan National Army (LNA) receives military support primarily from Egypt, the United Arab Emirates (UAE), and Russia. In response to the accords, LNA commander General Khalifa Haftar launched an assault on Tripoli to topple the government – prompting the Sarraj administration to activate its military agreement with Ankara. Meanwhile, Egypt has vowed to prevent any foreign power from controlling Libya as a matter of its national security.

Ankara believes Turkey's maritime delimitation agreement with the UN-recognized administration Tripoli provides Turkey with the legal standing to contest the region's maritime boundaries established by Greece's bilateral agreements with Egypt and the Republic of Cyprus. Athens's bilateral agreements defined maximal boundaries for Greece and Cyprus at the expense of Turkey. Under United Nations Convention on the Law of the Sea (UNCLOS) principle of equity and the international case law based upon it, Turkey is likely entitled to a larger maritime zone on account of its extensive coastline

In a mirror-image move, the new Ankara-Tripoli agreement creates a maximal maritime zone for Turkey by denying any of Greece's islands a continental shelf or an exclusive economic zone (EEZ), which provides sovereign rights over offshore energy resources.  The agreement, ratified by the Turkish parliament and now Turkish law, establishes an 18.6 nautical mile boundary between Turkey and Libya. It exclusively divides the entire maritime zone between them, an area stretching from Turkey's coastal Muğla province to Libya's eastern Derna and Butnan districts on the opposite coast, landfalls currently not under GNA control.

The delimitation is specious, as the maritime zone is defined by ignoring the presence of the 3,219 square mile Greek island of Crete that lies between these coasts. Article 121 of UNCLOS affirms island coastlines generate continental shelves and EEZs the same as any coastal land formation, except those that "cannot sustain human habitation or economic life of their own."  Crete, with its population of almost 650,000, (Athens has about 665,000 residents by comparison) would unquestionably generate an EEZ, in the southern part of which Greece plans to explore for offshore oil and gas.

Turkey's purpose in declaring its maritime border with Libya ostensibly is to pressure the international community and the Eastern Mediterranean countries themselves to devise an equitable settlement for the region's maritime boundaries and for the development and marketing of its offshore energy resources. In its December 1 public statement explaining the accord, Turkey's Ministry of Foreign Affairs made Ankara's intention explicit, “Through this agreement with Libya, the two countries have clearly manifested their intention not to allow any fait accomplis [Sic].”

Aside from the maritime boundaries, the faits accomplis to which Ankara objects are Turkey's exclusion from the marketing of Eastern Mediterranean gas and the preclusion of Turkish Cypriots in the northern half of the ethnically divided island from the development of Cyprus's offshore natural gas despite being the constitutional co-owners of the nation's resources.

Ankara has been severely constrained in its ability to defend these interests in the Eastern Mediterranean, as explained in a previous article in The Turkey Analyst, by a common front composed of the Republic of Cyprus, Greece, Egypt, and Israel. This grouping of the region’s current natural gas producers and Greece has created a set of interlinked security partnerships that have been increasingly supported by the United States, France, and Italy, each of whom has significant economic investments in Eastern Mediterranean gas.

Moreover, Turkey’s regional rivals Saudi Arabia and the UAE have been deepening their strategic relationships with this common front as part of their broader geopolitical competition with Turkey that includes the UAE and Egypt's military support for the LNA in Libya.

Claiming it has no other recourse, Turkey has sent exploration ships and drill ships to operate in Cypriot waters.  Presently Turkey has sent four vessels along with their naval escorts into disputed waters of the Eastern Mediterranean, but the gunboat diplomacy has only served to solidify Western and Gulf support for Turkey's rivals. The EU adopted a mechanism for sanctioning people and entities involved in Turkey's drilling operations off Cypriot waters and France and Italy conducted naval exercises with Cyprus. The United States has deepened its defense relationship with Greece and is poised to lift of the arms embargo against Cyprus in 2020.

IMPLICATIONS: Turkey's current Libya strategy has been over a year in the making that has witnessed a slow process of calibrated escalation by Ankara. On November 5, 2018, Turkey's defense minister Hulusi Akar held meetings in Tripoli with GNA officials to explain Turkey's desired option for the delimitation of their maritime boundary and assured the GNA government of Turkish military assistance in exchange for its cooperation.

A week later, Turkey was excluded from participating in an unscheduled meeting between Sarraj and Haftar at the Palermo peace conference on Libya, causing Turkey’s Vice President Fuat Oktay to storm out of the November 13, 2018 gathering, decrying “attempts to keep Turkey out of the process” to resolve the conflict between Libya’s two rival governments. Two days later, speaking in North Cyprus, Oktay vowed that "Turkey will continue to display its righteous and firm stance with determination in Cyprus, Syria and Libya." With Turkish forces in Syria and Turkish ships in South Cypriot waters, Oktay’s declaration of Ankara's "determination" ultimately signaled the intensification of its military support for the GNA government. Turkey upped its efforts to supply the GNA's allied militias with weapons and equipment. In December 2018, Libyan customs officials impounded 3,000 Turkish-made pistols and 2.5 million Turkish-made bullets.

From January through March 2019, Haftar's LNA forces swept across southern and western Libya taking control of the country's major oil fields in those regions. Controlling about three-fourths of Libya, Haftar launched a campaign to capture Tripoli itself on April 4, 2019, leaving the city under siege ever since.  In response to Haftar's campaign, Turkey elevated its support to the Sarraj administration in May 2019, including a public display of delivering armored personnel carriers and other weapons to the militia coalition defending the GNA. Haftar's LNA has claimed that Turkey also transferred jihadist fighters from Syria to Tripoli to aid the GNA-aligned forces

Haftar's LNA forces are assisted by a fleet of Chinese-made Wing Loong II drones supplied by the UAE and operated mostly by Emirati or possibly Egyptian personnel. With the besieged GNA faltering, Ankara supplied Tripoli-allied forces with Turkish-made Bayraktar TB2 drones that were put into service to carry out air strikes for the GNA and providing critical air support for the GNA’s pivotal counter-offensive against the LNA’s siege of Tripoli. The GNA reportedly relies heavily on Turkish personnel to operate the UAVs. The air support turned the course of the conflict in June by enabling GNA forces to drive the LNA from the city of Gharyan that served as the operational base for Haftar’s assault on Tripoli.

To counter Turkey's increasing efforts to station weapons systems and personnel in Libya, the LNA reportedly destroyed a project to build a Turkish base at Misrata Aerial College. The airstrike targeted a warehouse containing Turkish combat drone parts and other weapons. Tripoli's new accord with Ankara authorizes Turkey to deploy military personnel as advisors, trainers, and support technicians as well as for a rapid reaction force. As President Erdoğan explained in his December 9, 2019 interview on state-run TRT television, the agreement gives Turkey the right to deploy troops in Libya if requested by the GNA.

However, both maritime boundary and military cooperation agreements signed between Erdoğan and Sarraj are of questionable legality.The GNA's authority as well as that of Libya's House of Representatives (HOR) parliament now seated in Tobruk derive from the December 17, 2015 Libyan Political Agreement signed by the warring factions in Skhirat, Morocco, and adopted as international law through its endorsement by the United Nations Security Council.   Article 8, Section 2f of the Skhirat agreement places the power to conclude international agreements and conventions with the GNA's Presidency Council of Ministers" provided that they are endorsed by the House of Representatives."  Libya's HOR rejected the agreements, declaring them invalid on December 12, 2019.  On the same day, Haftar ordered his LNA forces to conduct an all-out campaign to capture Tripoli and topple the GNA.

CONCLUSIONS: Greece, which expelled Libya's ambassador on December 6, 2019, has been coordinating its response with Egypt, anticipating a military escalation. While Greece is vulnerable to Turkish reprisals in the Aegean, Egypt possesses the ability to intercept Turkish arms shipments should it choose to directly confront Turkey.  On December 16, 2019, Egyptian President Abdel Fattah al-Sisi declared, "We will not allow anyone to control Libya ... it is a matter of Egyptian national security."

Far from Turkey's shore, Ankara does not currently possess escalation dominance toward Cairo nor Moscow as Turkey presently lacks the naval hardware for blue-water power projection. Now with motivation to support Haftar's endgame to capture Tripoli before Ankara can establish a more formidable military presence, Cairo has incentive to provide Haftar with sufficient heavy armored vehicles and other support to conquer Tripoli.

On December 19, 2019, the GNA issued a formal request to Ankara for Turkish weapons and support personnel. While not improving its position in the Eastern Mediterranean, Turkey has made itself the security guarantor of the GNA, embroiling itself in the Libyan civil war as a major combatant. Short of extrication, Ankara's best hope is to assist the GNA battle Haftar's forces to a stalemate in Tripoli and then engage Moscow as a partner in the management of Libya as it has done in Syria. Yet, with Turkey lacking a land border with Libya, Russia is less likely to defer to Turkey's strategic ambitions. If Egypt backs up its commitment to prevent such an outcome, an already overstretched Turkey could find itself overcommitted and a facing rapid escalation spiral with which it cannot hope to cope.

More in this category: « Rich and Poor: What Will Turkey's New Polarization Bring? The Crackdown on HDP: Sustaining Authoritarianism with Ethnic Polarization »
back to top