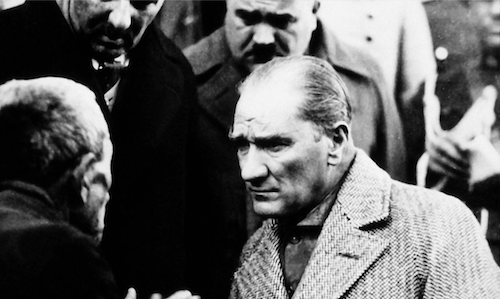 Background: At first glance, one might conclude that in its emphasis on the universal Islamic ummah (community), political Islam would be inclined to reject nationalism. But the form of Islamism as it has been advocated by the AKP in Turkey during the last decade in fact represents a powerful synthesis of two highly influential discourses observable in the Islamic Middle East and the Ottoman Empire since the beginning of the nineteenth century, namely Islamic-conservatism and nationalism. Today’s political Islam in Turkey is a combination of these two ideological traditions, compounded with the deeply internalized necessity to adapt to a global free market regime. Just as much as the AKP’s political Islam utilizes religious texts, symbols and traditions, it also utilizes the familiar discourse of nationalism.

However, this does not mean that the AKP’s political Islam has rendered the ummah irrelevant. In order to produce the very definition of the nation and national identity that ultimately legitimizes the AKP’s own rule, the Islamic-conservative project depends on the ability to provide the community a sense of order through the normative guidelines provided by common Islamic and nationalist discourses.

De-legitimizing the Kemalist ideology and its vision of secular Turkish nationalism, the representatives of the AKP, have re-interpreted the dominant version of Turkish national identity, embedding it in the concept of the universal Muslim community. Here, then, the crucial link between Islamism, nationalism and legitimacy becomes crystal clear. As a political belief system advocated by a particular social group, the AKP’s ideological narrative does not challenge nationalism per se, but a particular version of it, namely Kemalist secular nationalism. In doing this, the nationalist form of political Islam advocated by the AKP re-imagines the Turkish nation as the central part of the Muslim ummah.

In an important sense, the Turkish state itself is the author of the very principles or values by which its power is justified. This means that there is a direct link to the ‘trinity’ constituted by political Islam, nationalism, and legitimacy in Turkey. For if a state to a large extent participates to produce the narratives justifying its power, it is of course crucial who is able to control the state apparatuses, and through what kind of narratives the state’s legitimacy is reproduced thereafter.

Implications: The circular and self-legitimizing nature of modern politics goes a long way to explain why the AKP’s Islamism became much more explicit at the very moment it had conquered the state institutions. It is only after conquering the state apparatus and the monopoly of legitimate violence accompanying it, that the need to legitimize power through emotionally and intellectually powerful narratives becomes indispensable in maintaining the newly achieved status quo.

Now that the Turkish Islamist movement itself occupies the powerful central state that constantly represses all dissidents, it can no longer credibly justify its cause by claims of giving voice to the excluded periphery, like it could do before assuming power.

The emergence of both Islamist and Turkish nationalist expressions of the Islamic-conservative ideology thus indicates how a collectively reproduced Islamist belief system has managed to provide the narratives of legitimacy for the AKP after the party was able to completely conquer the state institutions in Turkey. This is in turn crucially linked to what can be defined as the rather weak ‘objective signifiers’ of an Islamic political actor. Arguably, at the end of the day, it is only by negation that this actor can exist at all, in the sense that an Islamist religious-cultural identification comes down to just a few negative counter-images such as alcohol consumption, transformed gender relations, loosening of the communal morality, and the perceived weakening of religious adherence in the individuals’ life. The threatening ‘other’ thus becomes that group of people who are allegedly supporting these degenerated habits. Indeed, this mechanism is at play in contemporary Turkey. One example was when Abdulrahman Dilipak, a well-known Islamist columnist, recently asserted that during the era of Kemal Atatürk, the first president of the country, children were given free alcohol and heroin in state schools, and that this was used as a tool to secularize Turkey.

In political Islam, religious adherence should not and cannot be a matter of the individuals’ private choice, precisely because the national community and its value for its members require the perpetual observance of religious behavior in the public realm.

Life-styles and values thus become the main exclusionary mechanism, and the reproduction and dissemination of the allegedly sacred values require that they are featured prominently in the national education.

In the wake of the failed coup this summer, the AKP regime has deployed a dual strategy toward the secular nationalist constituency:  to secure and bolster its power, the regime feels the need to both attack and accommodate this constituency. One aspect of this strategy is to ‘Islamize Atatürk’, a tendency that has been observable for some time.

Obviously, Atatürk is an historical figure that occupies a central position in all competing historical Turkish narratives. President Recep Tayyip Erdoğan has delivered several speeches that aim to redefine the meaning of Atatürk. Erdoğan has argued that the Kemalists produced a distorted narrative according to which ‘there was nothing before Atatürk.’ Instead, Erdoğan holds that the republic was not the product of a one man, but a milestone in the age-long process that commenced in 1071 when the Turks won the battle of Manzikert against the Byzantines. However, the historical narrative that Erdoğan promotes does acknowledge the importance of the proclamation of the republic; indeed, it is celebrated for having established a regime based on the unrestricted sovereignty of the Turkish nation.

Atatürk is widely esteemed by all sections of Turkish society, with the notable exception of the Kurdish nationalists. The “father of the Turks” is the national hero who foiled the plans of the imperialist West. Appropriating Atatürk in their historical narrative – by presenting him as a successor of a glorious Ottoman Islamic “world empire” and as the predecessor of the AKP, the embodiment of the sovereignty of the Turkish nation – bolsters the claim of the Islamic-conservatives to be the true representatives of the Turkish nation.

The historical tradition of the Islamic-conservative ideology itself determines the way in which the past is interpreted in the present by the actors involved in the reproduction and dissemination of this ideology. Thus, for contemporary actors wishing to reproduce a particularly conservative socio-political order, the past is not at all an arena of “unconstrained imagination”. It is instead to a significant degree defined by earlier interpretations that were established within this given tradition. Thus, in the process of reproducing the conservative ideology, the past needs to have a special meaning and value; this means that the partial rejection of Kemalist notions of the national history and identity requires that the historical narrative and national identity formation promoted by its main historical rival, the Islamist National Outlook movement from which the AKP sprang, are continued. The core element of this ideology was always anti-Westernism. However, when the AKP was founded, the party not only represented a rejection of the Kemalist national historical narrative, but equally purported to have broken with this Islamic-conservative national narrative.

Today, the AKP is re-embracing the latter narrative, while appropriating a redefined version of the former narrative in order to legitimate and uphold its power. Atatürk is reframed and his meaning more or less totally transformed. Within the Islamist-nationalist discourse, Atatürk is consistently referred to as the gazi, the Islamic warrior hero, who secured Turkish national independence, while his central role as the main protagonist of a radical and secularist modernization project is duly ignored.

Conclusion:  What is today increasingly uniting the various nationalist discourses in Turkey is uncompromising anti-Westernism. This brings together otherwise very different constituencies, Islamic conservatives, and secular nationalists. The extreme anti-imperialist interpretation which was elaborated within the nationalist-leftist (ulusalcı sol) version of Kemalism during the last decades has managed to feed feelings of xenophobia, self-victimization, and ultra-nationalism among a section of the Kemalist-minded constituency. However, more significant in terms of the number of followers and due to the broader societal acceptance that it enjoys, is the equally anti-Western but Muslim Turkish nationalism espoused by the nationalist far right, which is represented by  the Nationalist Action Party (MHP), and the anti-Western, and also highly anti-Semitic, Islamist National Outlook movement. These are discourses that the AKP had initially discarded. For a while, in the beginning of the 2000’s, the AKP represented a liberal, pro-Western stance that stood in firm opposition to these nationalist narratives.

After the failed coup attempt, the representatives of the Turkish regime expressed deep resentment against the West. The European countries and the United States were seen as having failed to show solidarity with the democratically elected government of Turkey. The belief that the United States had somehow been involved in the failed coup is widespread in Turkey. This means that the efforts of the AKP regime to forge a common, anti-Western ideological narrative by fusing the different nationalist discourses – Islamic-conservative, Kemalist, far right nationalist and leftist nationalist – are much facilitated.

More in this category: « The “Logic” of Turkey’s Repression Turkey’s Proposed Constitutional Changes and Erdoğan’s Forever War »
back to top