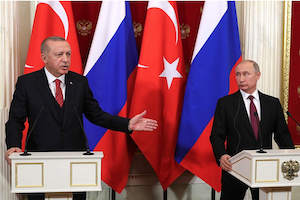 Turkey's turn toward Russia in energy geopolitics was matched by its turn toward Russia for its strategic air defense needs, as Ankara sought to exercise more autonomy from its NATO allies in the Middle East and the Mediterranean.  The run-up to Turkstream's operationalization also witnessed the multi-phase 2019 delivery of the Russian S-400 air and missile defense system. Despite the United States' prohibiting Turkey from acquiring F-35 fighter jets as a result of Turkey's S-400 purchase, Ankara continued talks with the Russian manufacturer throughout late 2019 about purchasing additional S-400 batteries. These developments were immediately followed by what appeared to be a grand strategic convergence between Turkey and Russia concerning Libya.

As explained in a previous article in The Turkey Analyst, Ankara embroiled itself in the Libyan civil war as a major combatant with its November 27, 2019 signing of two Memoranda of Understanding with Libya’s Tripoli-based Government of National Accord (GNA)  on "Delimitation of Maritime Jurisdiction Areas in the Mediterranean” and “Security and Military Cooperation.”  The deals formally placed Turkey and Russia on opposite sides in the Libyan civil war, although Ankara had already been increasing its militarily support to Tripoli against its rival Tobruk-based government whose Libyan National Army (LNA) receives its primary military support from Russia, the United Arab Emirates (UAE), and Egypt.

On December 19, 2019, the GNA invoked the defense pact, issuing a formal request to Ankara for Turkish weapons and support personnel.  As the GNA's security guarantor, Turkey threatened to conduct a major military deployment to Libya. Putin's early January visit to Turkey, ostensibly to co-inaugurate Turkstream, provided the forum for high-level coordination between Erdoğan and Putin, resulting in a joint Turkish-Russian diplomatic initiative that set the international agenda in Libya.

On January 8, 2020, Turkey and Russia surprised both their Libyan clients and the international community by jointly calling for a ceasefire to take effect on January 12. Forcing both GNA and LNA to accept a conditional truce, a ceasefire signing ceremony between the two sides was scheduled to occur in Moscow under Turkish and Russian auspices. Moscow apparently did not consult LNA commander General Khalifa Haftar nor his backers in Cairo and Abu Dhabi.  Although Haftar left Moscow without signing the ceasefire agreement despite GNA assent to the accord, the joint Russo-Turkish diplomatic initiative became the framework for the January 19 international Libya peace conference in Berlin.

The Russo-Turkish initiative confirmed Turkey's role as one of the principal power brokers in Libya. It also provided enough of a break in the conflict for Turkey to transfer sufficient air defense capabilities to Tripoli and allied Misrata to prevent the collapse of GNA forces in the face of an ongoing LNA assault.

IMPLICATIONS: To many international observers, Moscow and Ankara appeared to have agreed to divide the management of the Libyan conflict along similar lines as they had done in Syria, giving rise to the perception of a chimeric Russo-Turkish strategic partnership in the Mediterranean. The reality in Libya is that Russia’s military activity is rather superficial.  Although Russian mercenaries have been fighting on the LNA’s frontlines in its assault on Tripoli, Russia’s presence in Libya is not very deep when compared to the naval and air bases Russia maintains in Syria. Moscow's joint diplomacy with Ankara concerning Libya served to bolster Russia's position as well as Turkey's position.

In an effort to immediately reinforce the GNA's defenses against the LNA's assault, Turkey began the process of transferring thousands of Turkish-aligned Syrian fighters to Libya. The jihadist orientation of many of these mercenaries has further exacerbated one of the principal points of contention between Turkey and Russia, namely Ankara's failure in Idlib province to eliminate the Sunni militant coalition led by Syria's former Al-Qaeda affiliate Jabhat al-Nusra, Hayat Tahrir al-Sham (HTS).

Under the terms of September 2018 Sochi agreement between Ankara and Moscow, Russia acceded to the creation of a jointly monitored, demilitarized zone with Turkey in Idlib. An outer ring around the zone was monitored by Russian military outposts, while an inner ring composed of twelve Turkish military posts monitored internal activity. The agreement prevented Syrian and Russian air force attacks on Turkish troops and the forces of the Turkish-backed National Liberation Front (NLF) coalition on the condition that the NLF, under Turkey's supervision, would remove HTS from the zone. However on January 10, 2019, the NLF ceded control of its positions to HTS, allowing Jabhat al Nusra to secure its hold on northern Idlib. As early as January 18, 2019, Russian Foreign Minister Sergey Lavrov expressed the Kremlin's consternation, stating that “it also worries us that in Idlib, contrary to the agreements on creating the demilitarized zone there, Jabhat al-Nusra dominates and violates the demilitarized zone. About 70 percent of this territory is already occupied by terrorists; they are trying to attack the Syrian army’s positions, settlements and they are trying to threaten our military air base in Hmeymim.”

On December 19, 2019, the same day that the GNA invoked its defense pact with Turkey, the Syrian Arab Army (SAA) launched simultaneous offensives in Idlib province and the western hinterland around Aleppo.  Utilizing heavy artillery and supported by air cover provided by the Russian air force based in Hmeymim, the Assad government forces have registered significant gains.  In Idlib province, the SAA has retaken key nodes in Syria's highway system such as Maʻarat al-Nuʻman and Saraqib, resulting in seven out of twelve Turkish military outposts being surrounded by Assad's forces. In the process, SAA operations have killed a total of 13 Turkish soldiers.

The Assad government has now recovered approximately 20 percent more territory in Idlib and has regained control of the region west of Aleppo. Crucially, the Assad government has regained full control of the M-5 highway for the first time since 2012, restoring the economic lifeline of Syria that connects the capital Damascus to the country's commercial center of Aleppo.

The SAA's 25th Special Missions Division and the 5th Assault Corps have spearheaded the offensive. General Suhail al-Hassan, who enjoys very warm relations with Moscow, commands the 25th Special Missions Division while the 5th Assault Corps combat formation was developed by Russian military advisors in 2016. The leading role played by these two formations indicates that the Kremlin has willingly acceded to the Assad government's attempt to recover Idlib province from Turkish control.

Turkey has demanded that Syrian forces withdraw and has threatened Russia that if Moscow does not pressure the Assad government to withdraw its troops immediately, the Turkish military will force the SAA to withdraw. Backing up its threat, Turkey has sent over 100 military convoys into Idlib province through the end of the second week of February.  The largest Turkish military build-up there since the 2011, the Turkish military presence has reached some 9,000 forces along with heavy artillery pieces, rocket launchers, main battle tanks and armored personnel carriers.

Ankara has defined Idlib as a vital national security concern because the elimination of Turkey's presence from Idlib would endanger Turkey's control of parts of northern Syria along its border. Taken through three separate military operations, each of which enjoyed Moscow's acquiescence, Turkey's presence in northern Syria is aimed at curtailing the power of the Syrian Kurdish forces of the PKK-affiliated Peoples' Protection Units YPG.

Turkey's desired outcome in the current stand-off is to raise the cost to Russia sufficiently to bring Moscow around to supporting a modified Sochi agreement or, at a minimum, guaranteeing some form of Turkish oversight in the areas of northern Syria currently controlled by Ankara.  However, Turkey's window of opportunity to calibrate an escalation to achieve this outcome is likely very narrow.

While the war-fighting capabilities of Syrian Arab Army forces in Idlib are no match for Turkey's 2nd Field Army, Russian air dominance in Syrian prevents Turkey from providing the requisite air support for these ground forces to be effective in Idlib. Thus, a counter-offensive by the Turkish 2nd Field Army could provoke a Russian counter-escalation that would likely not be contained to Idlib.  Once provoked, Moscow could seek to conclude its end game by summarily removing Turkey's presence from all of northern Syria.

CONCLUSIONS:  On February 18, 2020, a second round of talks between Turkish negotiators and their Russian counterparts failed. President Erdoğan, speaking before a parliamentary group meeting of his ruling Justice and Development Party (AKP), re-affirmed his intention to launch a counter-offensive operation in Idlib if Russia does not meet his terms by February 29. Declaring that "the Idlib operation is a matter of time," Erdoğan promised that "Turkey will not leave Idlib to the Assad regime and its backers."

Despite the increased number of sectors of cooperation, the Russian-Turkish relationship has not shifted from its fundamentally transactional nature.  The October 2019 U.S. withdrawal from northern Syria, especially the U.S. climbdown from its prior support of PKK- affiliated Syrian Kurds, ensured that the relationship would remain transactional by eliminating Ankara and Moscow's only common interest in Syria.

Barring a wide-scale conflagration between Turkey and Russia, Ankara could compartmentalize whatever losses it may endure in Syria to preserve its other cooperation with Russia, which enables Ankara to maintain a certain level of autonomy in its relations with its NATO allies.  Meanwhile, the reduction of Russo-Turkish cooperation in Syria opens the door for Russia to involve Saudi Arabia and the UAE as partners in the reconstruction of Syria as well as to develop more robust partnerships with Riyadh and Abu Dhabi in other parts of the Middle East and North Africa.

More in this category: « Turkey's In-between State of War and Peace with Russia Feeding the Beast: "Kanal Istanbul" and Crony Capitalism in Turkey »
back to top